“We think of America as a land of opportunity”, and it was. Back between the 1600’s through 1774 America was a great place to start off fresh and move onto something new and exciting. Many people wanted to relocate to the America’s due to the great rumors, which it had lead on. Although there were many opportunities available in America, they were limited and were a struggle to succeed in for some. The new settlers of America came from many different backgrounds and had different reasons of interest to relocate.

Don't use plagiarized sources. Get your custom essay on
“ America: Land Of Opportunity ”
Get custom paper
NEW! smart matching with writer

For some, like the pilgrims, America was an opportunity of freedom, freedom of religion, or freedom of speech due to political reasons. For others, America was a land of wealth, a place where many believed they could succeed in reaching a higher power. America is also considered a place of new resources, and new skills that many did not have but surely needed. “Economics is also important. England was overcrowded and many people suffered from lack of economic opportunity (Module 2: The motives of the English).

Due to the new nutritious American crops, England’s population had doubled, leaving the people with the struggle to find food, clothing, and other goods. Although England became very overpopulated, it gave many of the English the idea and opportunity to migrate to larger “land-rich” islands, which were supposedly empty. (Norton, 37-38) The English also had the motivation to leave their homeland, because of the religious reformation that occurred. King Henry wanted to divorce his wife and remarry but the Pope denied his wishes and did not allow him to do so.

King Henry than created a new church that would replace the Catholic Church hierarchy, where he eventually became the leader. By creating the new Church of England, King Henry was able to legalize his divorce. King Henry’s decisions and actions lead to many unhappy Pilgrims and Separatists, who eventually left England for religious freedom in the new world, America as we call it. The Pilgrims also known as Puritans set off hoping to purify the church, while the Separatists were hoping to simply change the Church of England.

As for the poor people living in England, it was a much rougher time getting to America, and their opportunities were very limited. In order to travel to America, the poor had the option to agree to five, six, or seven years as indentured servants to receive a pass to Jamestown where they could get 50 acres of land, which they could grow Tobacco and become a competitor of their employer. Even with the great opportunity of receiving 50 acres at the end of a couple years of hard work, they had to be able to survive on their own. The owners of these indentured servants were rough and mean, and basically did not care to cloth them or feed their servants. Although, some of the servants would not survive through the five to seven years of hard work to even receive their land, which they truly deserved.

Many servants would write letters back to their families in England, asking to buy them out of their agreement or to at least send some food. In other words, America was an opportunity of great risk for the poor. (Module 2: Tobacco and the Success of Virginia) For many different groups and settlers, America was the greatest place to grow crops which where very much needed, and would help with trade, and most of all with wealth and power. John Rolfe, the husband of Disney’s legendary Pocahontas, hoped to find gold but instead made an amazing success of growing tobacco in Jamestown. Rolfe’s success eventually brought many more settlers who would bring in those indentured servants to build more wealth and opportunity, also for trade. For example, “In 1617, the colony exported 2300 pounds of tobacco to England. Seven years later, they exported 200,000 pounds. And by 1638, 3 million pounds (Module 2: Tobacco and the Success of Virginia)”.

Even though it was a hard time for servants in Jamestown, it was a great opportunity of success for the first English settlers. As for South Carolinians, they did not care so much for the gold but were actually searching for a good profit-making crop. They began to realize South Carolina was a perfect location for growing rice due to the help of the slave labor, which had already existed before their settlement. “In the 1700s, rice was the most profitable product produced in the English founded colonies of North America. (Module 3: Restoration Colonies).” Charleston eventually became the most elegant city of North America, because the most wealthy rice planters lived there.

Everyone heard of the sweet American Dream that consisted of great opportunities leaving many people with hope and desire. Several groups and individuals set off looking for this American Dream and many found what they were looking for, but maybe struggled on the way. For some this American Dream cost them their lives but for others it was a chance in life worth taking. Even today, many immigrants believe America to be a land of unthinkable opportunities to help fulfill their wishes and dreams for not only themselves, but their families as well. During 1600-1774 America was truly the land of great opportunity, even though some failed to succeed, it was most likely worth dying for. In my opinion, one is better off dying for their freedom, than doing nothing and always wondering and living with a life of regret. 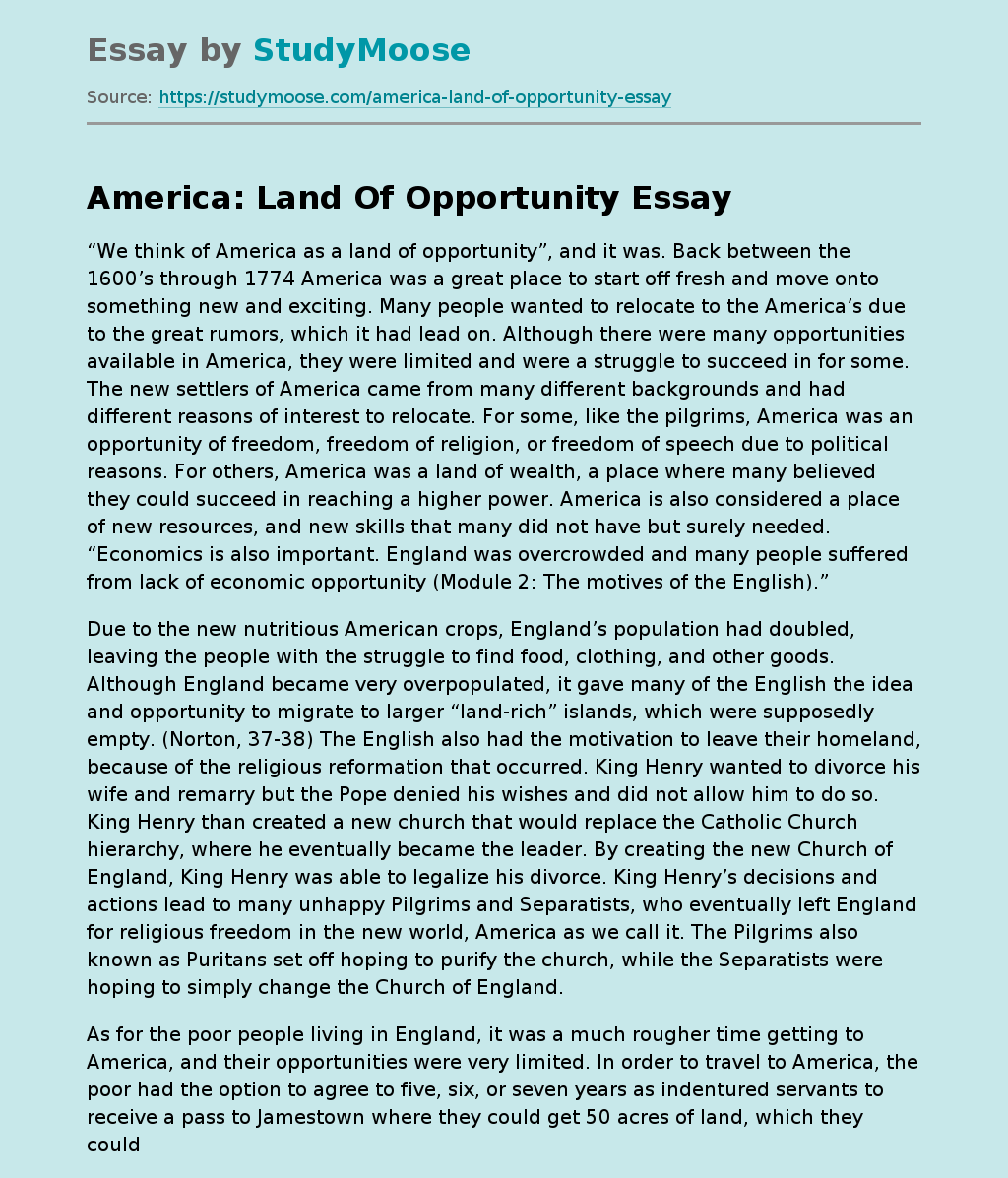