Amelia Earhart: A Symbol of the Power

Amelia was a born pilot. She accomplished many things for being a woman! For example, she was the first woman to cross the Atlantic Ocean! She said after riding a $1 paid ride over Los Angeles “As soon as we left the ground, I knew I myself had to fly.” But what happened to this famous pilot?

Amelia Earhart was born in Atchison Kansas, on July 24, 1897. She was the first child born in her family. Three years later her younger sister, Muriel, was born.

Don't use plagiarized sources. Get your custom essay on
“ Amelia Earhart: A Symbol of the Power ”
Get custom paper
NEW! smart matching with writer

Later in 1917 Amelia left to visit her sister in Canada. She saw World War 1 soldiers who were injured. She then decided that she was going to be nursing in a soldiers hospital then going to college. In 1920 Amelia found out that her parents had gotten back together and moved to California, and so Amelia went to California to be with them.

After flying a $1 ride above Los Angeles , she knew she was destined to fly. Amelia worked several jobs to take flying lessons with pilot Anita. Later she saved enough money to buy her own plane.

In 1927 Amelia got a phone call from Captain Hilton. She had the chance to fly across the Atlantic Ocean.

Four years later Amelia flew across the Atlantic Ocean on her own, she flew it in 13 hours, and 30 minutes. Amelia was famous throughout Europe and the United States. Then a few years later, Amelia Earhart was the first woman to fly California to Hawaii. Amelia loved flying, in 1929 she participate in a founded organization of women pilots called Ninny Nines.

Then Amelia Earhart was ready for the challenge. In June of 1937, Amelia Earhart set out to fly around the world with her navigator, Fred Noonan. She went to Miami Florida to South America, to Africa. She continued over the Sahara desert to Thailand, and then to Australia. She was then taking off from New Guinea to the East coast of the United states, but then the US coast lost contact with the plane. No trace of the plane or the passengers where ever found.

Amelia Earhart: A Symbol of the Power. (2021, Apr 22). Retrieved from https://studymoose.com/amelia-earhart-a-symbol-of-the-power-essay 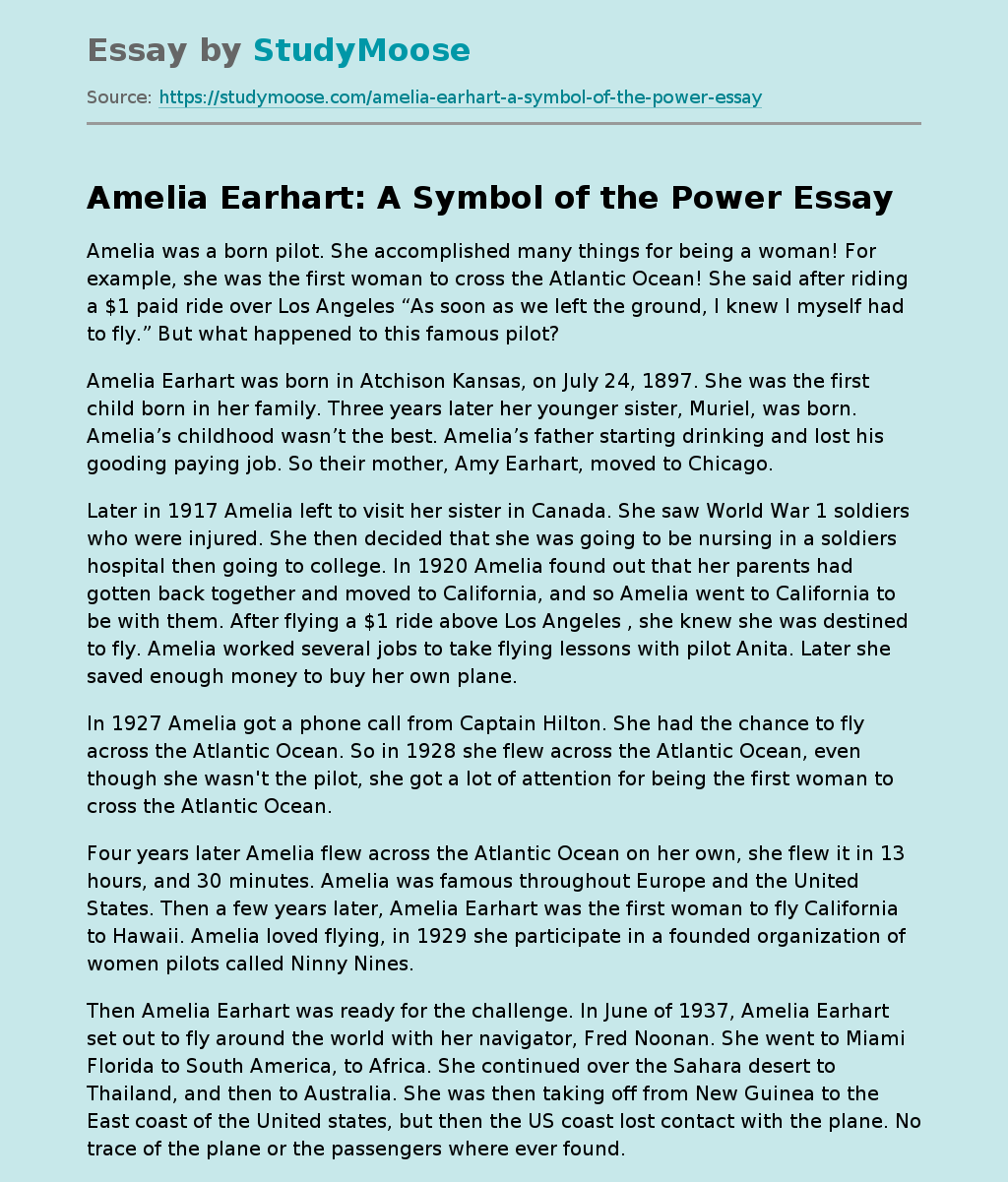