Ambition in Macbeth by William Shakespeare

What is ambition? Ambition is described as eager for success, power or fame. For Macbeth. Ambition was what drove him to become great, it forced him to change his nature towards evil. At the beginning of the play, Macbeth was portrayed as a courageous soldier who fought for his King without mercy. But once the witches planted the seeds of greater things and Lady Macbeth fuelled his ambition, which lead him to become greedy and power hungry.

Macbeth was led down to an unescapable road of doom by an outside force, namely fate in the form of the three witches.

Don't use plagiarized sources. Get your custom essay on
“ Ambition in Macbeth by William Shakespeare ”
Get custom paper
NEW! smart matching with writer

There was no supernatural force working against Macbeth, which therefore makes him responsible for his own actions and inevitable downfall. Macbeth is indeed responsible for his own actions, which are provoked by an unwillingness to listen to his own conscience, the witches, and his ambition. The witches tempted Macbeth with their prophecies, which made Macbeth¡¦s heart and mind slowly filled with ambition and his huger for power.

The witches predicted, at the beginning of the play, that Macbeth would soon become the Thane of Cawdor and eventually the outright King. They tell Macbeth this, simply to ignite what would finally end up in him taking the life of King Duncan.

Ambition, no matter how small, builds up, and becomes a need. When this ambition is built up and encouraged, it can influence a person’s decision. Macbeth went to three witches, who prophesized that he would become King. This got Macbeth thinking of how he can become King.

At this time, he was still unsure of whether he would take any action toward gaining the crown. When he comes back to his house, Lady Macbeth convinces him to murder King Duncan, through emotionally degrading him, shown in the quote: “Art thou afeard/ To be the same in thine own act and valour/ As thou art in desire?” (Act I, Scene IV). This quote shows how Lady Macbeth influenced Macbeth’s decision, because after hearing about the prophecy, she also had the ambition for her husband to become King.

Macbeth slowly becomes accustomed to killing and does it more easily and without remorse. For example, after Macbeth becomes king, he begins to worry about the second part of the prophecy, when Banquo’s sons become kings. Knowing that he will not have any heirs, Macbeth dreads the idea of “the seeds of Banquo kings. Rather than so, come fate into the list, and champion me to the utterance…” (3.1.70-73). Since he committed a sinful act to fulfill his desire become king, Macbeth does not want to lose everything he got to Banquo’s royal bloodline This shows how corrupt and villainous Macbeth has become; he will not let anything, not even friendship, get in the way of his desire to be the King of Scotland. And if the destruction of friendship is not a symbol of how strong Macbeth’s ambition truly is, then the manslaughter of an innocent man’s entire family is. When Macbeth sees the three apparitions, one of them tells him to beware Macduff.

Surprisingly, after Macbeth learns that Macduff has fled to England, he responds by declaring that he will “give to the edge o’ the sword his wife, babes, and all unfortunate souls that trace him in his line.” (4.1.151-153). This shows how corrupt and evil Macbeth has become; he doesn’t even care about who he’s killing anymore. A wife and kids symbolizes purity and love in a man’s life; the fact that Macbeth doesn’t even consider the moral consequences of destroying a loving family and killing children shows how filled with ambition he has become. Macbeth is so afraid of losing to Macduff that he believes that by killing his family, Macduff will be broken beyond repair and not be able to face Macbeth. Unfortunately, he does not count on a certain someone to heighten Macduff’s hopes to slaying Macbeth by using his sorrow to his advantage. That certain someone is Malcolm, the son of Duncan.

After the murder of his father, Malcolm’s ambition to destroy Macbeth becomes so strong that he forgets all moral values and disregards the feelings of others; this ambition represents revenge. Though Malcolm is able to understand the feelings of others, he lets nothing stop him from achieving his goal; this is either due to his inexperience of the world, or because he is too bent on revenge to think about anything else. When Macduff learns that his family is murdered, he begins to despair. Malcolm, not wanting to let anything get in the way of his ambition, tells Macduff to “dispute it like a man.” (4.3.221). Since Malcolm is a young man; he does not have a wife or kids and disregards Macduff’s pain as a sign of weakness. Note that even if Malcolm had a family and understood Macduff’s pain fully, he would still have been reckless and put revenge above anything else. Malcolm’s father was a good man who lost his life at the hands of the man he trusted the most;

Malcolm is not going to let Macduff’s personal tragedy get in the way of his goal of destroying Macbeth. When Macduff responds by saying that first he must feel pain like a man, Malcolm responds by telling Macbeth to make his grief “be this the whetstone of your sword. Let grief convert to anger; blunt not the heart, enrage it.” (4.3.230- 231). While Malcolm is more understanding of the pain Macduff feels, he still convinces him to move on. When he says “let grief convert to anger”, he means for Macduff to use his sorrow as his anger so he can move on with his life and destroy the man responsible for his sorrow: Macbeth. Malcolm truly does feel bad about Macduff losing his family, but unlike Macduff, he has no family to worry about and has not experienced every pain and sorrow Macduff has been through. Given this evidence, it is evident how much ambition Malcolm has for destroying Macbeth.

Macbeth is not fully to blame for his ambition clouding his judgment since the audience knows that Lady Macbeth has him kill Duncan so she can be Queen; this ambition represents power. While Macbeth is to blame for all he has done to his country, his wife started a chain reaction that sent Macbeth down this dark path. Had Macbeth not told his wife about the prophecies, she would not have become so obsessed with power and she would not have sent her husband to kill Duncan so she could be Queen faster…and all of Macbeth’s victims would be alive and well. Lady Macbeth wants so desperately to gain power, she begs of the immortals to “unsex me here and fill me from the crown to the toe top-full of direst cruelty!” (1.5.41-43). Lady Macbeth is asking the spirits (or gods…I’m not quite sure; it’s pretty vague) to make her cruel and unforgiving so she can do the terrible deed of killing Duncan. This shows how evil and impatient Lady Macbeth is; had she waited for Duncan to promote Macbeth, she could have been Queen without her husband having to kill anyone, Macbeth would still have been a good person, and they would not have had to suffer so much guilt for all they did.

Later, after Lady Macbeth drugs the guards, she boasts about the drugs “that which hath made them drunk Sprouse hath made me bold; what hath quenched them hath given me fire.” Now Lady Macbeth is almost certain that they will not fail; her ambition has clouded her better judgment and ignored the possibility of guilt haunting her and her husband. This ambition, the ambition of power, is by far the most deadly of all ambitions. If you want power so badly and very quickly, you forget about all the consequences that might come from it. In Lady Macbeth’s case, her consequence for her actions was the loss of her sanity and restless nights thinking about what she made her husband do, eventually causing her to take her own life. This being said, I think it is safe to say that too much ambition is NOT a promise of power or a sign of greatness.

Ambition in Macbeth by William Shakespeare. (2016, Mar 20). Retrieved from https://studymoose.com/ambition-in-macbeth-by-william-shakespeare-essay 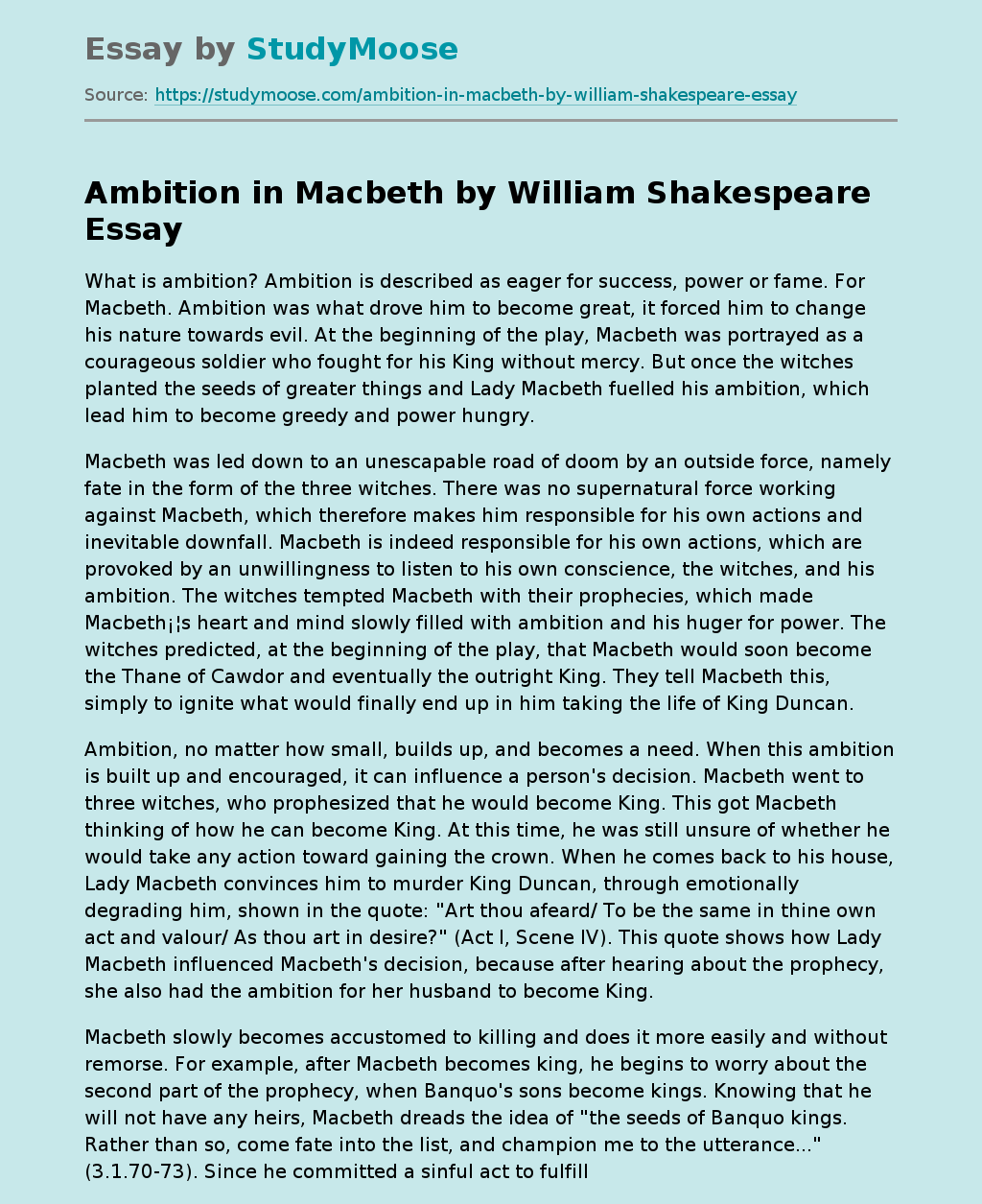