The title of the movie should actually be “Salieri”, because the whole movie is really about his jealousy of Wolfgang Amadeus Mozart and how Salieri was overshadowed musically by Mozart. In the beginning, Salieri makes a “deal” with God so He will make Salieri a musical genius, and Salieri believes he has been granted this gift until the day Mozart comes to Vienna. Salieri immediately becomes jealous that God has bestowed upon Mozart the power he himself worked so desperately to achieve.

Don't use plagiarized sources. Get your custom essay on
“ Amadeus Movie Review ”
Get custom paper
NEW! smart matching with writer

From that point on, Salieri becomes obsessed with conspiring against Mozart, at one point paying a maid to go to Mozart’s place to spy while she is cleaning and report back to him. Eventually, though indirectly, Salieri kills Mozart.

The major theme in this movie is the jealousy of Salieri, and how it consumed his every waking thought. It is somewhat depressing because it also shows all the hard work of Salieri with no success and the ease of Mozart’s ability when to him composing music is quite easy.

Though the plot is fairly realistic, it is not completely historically accurate. Mozart was even more rambunctious and childish than portrayed in the film, and the ending is dramatized for the “Hollywood effect.” The acting though, is very well done. Director Milos Forman did a great job directing F. Murray Abraham (Salieri) and Tom Hulce (Mozart) to stardom. They make the two and half-hours of wigs, wigs, opera, and more wigs bearable. Together they bring the silver screen alive and take us from our era into that of Mozart very seamlessly.

The sets are amazing, with great attention to detail and depth. The scenes where the operas take place are very well set up, and they fit in nicely with the time period. The costumes, too, are quite the feat. The many layers (of the women’s costumes especially) look extremely complicated to make, and the scene at the party where Mozart plays the piano upside-down showcases these costumes beautifully. I don’t know if I am more impressed by the designers or the actors and actresses who wore them because they look so hot! The wigs are a defining part of the costumes in the film.

The most striking reasons these are so appealing and dramatic are that they are so big and almost appallingly white. Some of the Women’s wigs are even topped with a huge hat to match the dress or some other exotic object. If you don’t watch this movie for any other reason, watch it for the costumes. The makeup artist did a good job, but nothing spectacular or worth highlighting. There aren’t many special effects, so adding some in there may have made the movie that much more enjoyable.

Overall, I give the movie 1 ½ stars, because the actors really knew their stuff but the plot wasn’t all that entertaining. I think the best part overall was Mozart’s laugh, and the soundtrack was really very enjoyable. I recommend this film to those who wish to learn more about Salieri, and not Mozart, because the movie doesn’t really focus much on him. Rent this film if you have absolutely nothing else to do on a Saturday night but you probably won’t be able to finish watching it unless you’re a major cultural history junkie. Other than that, a note to the intended audiences (like I said, the culture gurus): enjoy! To the casual moviegoer who likes action or romance: beware- you probably won’t be able to watch the whole 160 minutes of Amadeus. 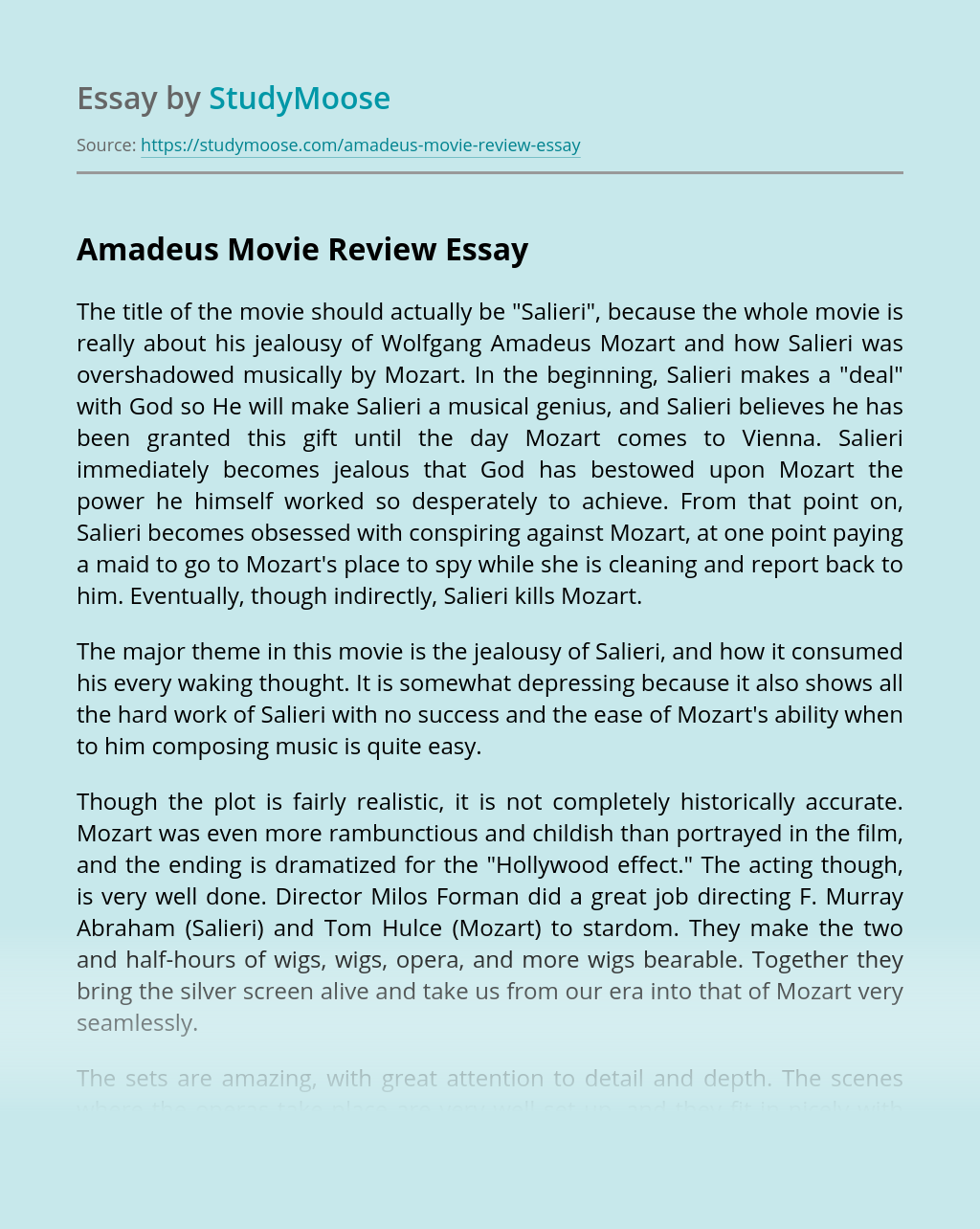