Although Shakespeare wrote "Romeo and Juliet" 400 years ago

Although Shakespeare wrote “Romeo and Juliet” 400 years ago, there is still a great deal to appeal to an audience in the year 2007. What have you found in this 1590s play that appeals to a modern day audience?

The famous play “Romeo and Juliet” by William Shakespeare is still a popular play, despite being written so long ago. Like many of his other plays, it is still performed in theatres worldwide, with many film and television adaptations of the basic story.

The only differences between “Romeo and Juliet” and a modern day play are the language and context in which it was written.

Don't use plagiarized sources. Get your custom essay on
“ Although Shakespeare wrote “Romeo and Juliet” 400 years ago ”
Get custom paper
NEW! smart matching with writer

Even though many audience members may not grasp the old fashioned language of the play, they are still able to understand what is going on. This is because Shakespeare wrote such beautiful words with such precision, so that the play would still be understood by the actor’s body language and acting.

Oxymoron’s, metaphors and similes are frequent: all this poetry makes the play unique and beautiful, which engages the audience.

“It is the east and Juliet is the sun!”

This quote is an example of a famous metaphor in the play: the sun always rises in the east, so he is saying that Juliet is the light of his life.

One of the most powerful aspects to engage a modern day audience is the language of the play: mostly written in iambic pentameter, the whole play seems to flow with ease, with the exception of the character Mercutio who occasionally talks in colloquial terms.

” Romeo: I dream’d a dream tonight

Mercutio: and so did I

Romeo: Well, what was yours?

This passage shows Shakespeare’s use of poetry and the way a character oftenl finish the end of each others sentences gives the piece a flow and shows it as if it is a normal conversation.

Appealing characters such as Mercutio lift the play through the bitterness and sorrow. This is because the appeal of the characters is vital. Although essentially a tragedy, some humour needs to be brought in so there is an appeal for more audiences, which Mercutio provides. An audience member would also be able to connect with “Romeo and Juliet”, because of their forbidden love.

The play starts with a fight scene, and all the way through we see hate being portrayed as one of the main themes.

In addition to hate one of the main themes is that of love, because without either love or hate the play would not exist.

The Romance of this play can captivate people’s hearts in many ways.

At the beginning of the play Romeo is madly in love with Rosaline, but is constantly referring to darkness and uses many oxymoron’s to describe his love for her, as shown in the quote below

The use of oxymoron’s suggests he doesn’t really know what love is at this point in the play. For an audience of any era, any would see him as a tad pathetic, but there is a contrast that comes over him. When seeing Juliet we see him grow and realise what love is, hence referring to her as “light” not dark.

In some parts of “Romeo and Juliet” such as the balcony scene, the two leads speak using sonnets. This is considered the most romantic of all poetry. Many members of the audience would find this rather rushed, but the way the famous balcony scene is presented, it is hard not to be captivated. Also, 400 years ago, this would still have been seen as rather strange. But does it really matter?

The constant array of metaphors and similes links back to subjects such as light, the sea, and the universe.

“It is the East, and Juliet is the sun!”

This quote shows how Romeo feels about Juliet only after meeting her, and would warm the hearts of the audience to the two star crossed lovers.

A modern day audience would be able to engage in the love aspect of the play because everyone has been in love, whether platonic, romantic or unrequited.

When written the downfall of Romeo and Juliet would have been scorned upon as suicide was seen as a sin, however for a modern day audience member there is an advantage, because in these years we are far more sympathetic and understanding when it comes to love.

“My only love sprung from my only hate!”

The theme of hate is vital in “Romeo and Juliet” – the hate between the two families especially: This line, spoken by Juliet, shows why Romeo and Juliet cannot be together, as the families are sworn to hate each other. The fact Shakespeare never says why the Capulets and Montagues are fighting shows how petty the whole thing is in the first place.

“A plague o’ both your houses!”

The death of Mercutio shows him insulting both families, and not just the Capulets.

The death of Tibalt is also led by hate, in which Romeo says:

“And fire-ey’d fury be my conduct now!”

This passage shows his hate is leading him to kill Tibalt, so hate is a very important aspect of the play.

The last important part of the play is fate. The audience is told at the beginning that “Romeo and Juliet” will die, and most of the world knows the story basics whether or not they have read it, but still are touched by the last scene.

This quote is Romeo screaming at fate and what the play has led to, a modern day audience member can connect to this after seeing the downfall.

To conclude, there are many things to appeal to a modern day audience. Just because the play was written so long ago, does not mean that we are not able to connect with the play. Many adaptations, films and plays are performed of “Romeo and Juliet” even today. Just because they were written so long ago does not mean anything: the play as a whole is what makes it so beautiful.

Where would we be if the bible was not read because it was “too old.”?

Although Shakespeare wrote "Romeo and Juliet" 400 years ago. (2020, Jun 01). Retrieved from https://studymoose.com/although-shakespeare-wrote-romeo-juliet-400-years-ago-new-essay 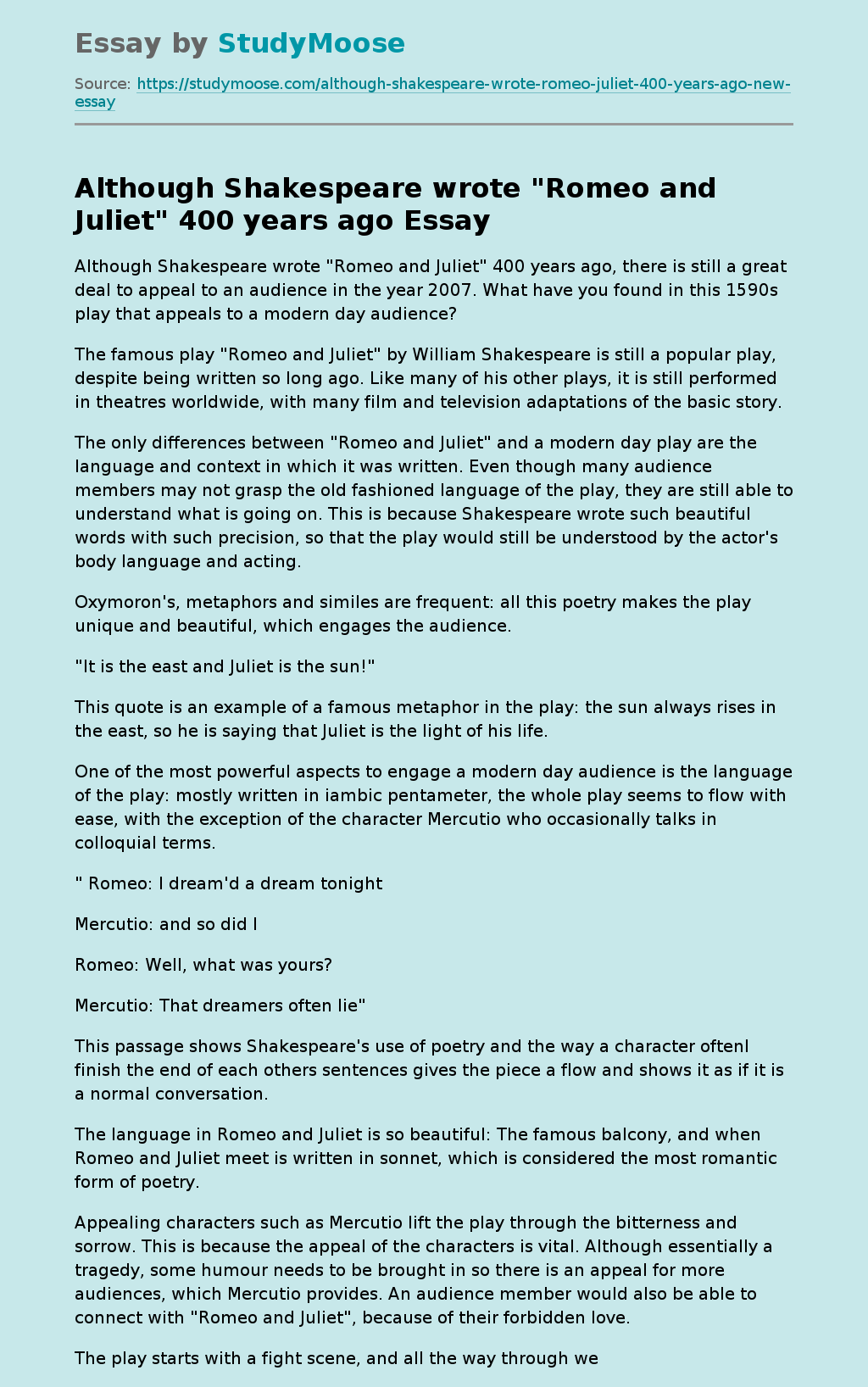