Alternatives to Incarceration to Non-Violent Crimes

In the articles “Condemn the Crime, Not the Person” by June Tangney and “Shame is Worth a Try” by Dan Kahan the authors discuss alternatives to incarceration to non-violent crimes. In Kahan’s article he introduces the alternative called “Shame Sentencing”(574) and June Tangney introduces the alternative to incarceration and shaming with a future productive “Guilt Sentencing.”(568) In their articles Tangney and Kahan both have valid points regarding the use of shame sentencing as an alternative to imprisonment; Tangney argues that “shaming” is wrong and offers a beneficial alternative in community service, whereas Kahan barely comes to a conclusion that shame “is worth a try”.

Don't use plagiarized sources. Get your custom essay on
“ Alternatives to Incarceration to Non-Violent Crimes ”
Get custom paper
NEW! smart matching with writer

Throughout Tangney’s article she expresses that she is very against the alternative to imprisonment used today, shame sentencing. She does however in her article offer a substitute to shame sentencing called guilt sentencing. Guilt sentencing, for example, is making the offender go to a drunk driving crash site to help clean up if convicted of a DUI.

With this method the public at large and the state save money while saving scare prison space; also the offender’s closing thought is that they did a bad thing, not that they are a bad person. (568) Unlike shaming that is scientifically proven that it, “serves to escalate the very destructive patterns of behavior we aim to curb.”(Tangney 567) What Tangney means by this is that shame sentencing may be cheap, but it isn’t as effective as it is hyped to be. With shame sentencing your name and your crime is put out in your local newspaper, which is supposed to create the effect of guilt and remorse; but this type of sentencing actually ends up creating violent or reoccurring problems with minor or major crimes.

Tangney also explains throughout her article that, “feelings of guilt are much more likely to foster constructive changes in future behaviors.”(568) Tangney exclaims that this is because guilt sentencing, “gives a sense that, I did a bad thing rather than I am a bad person.”(567)

Through that method a person can mold their mind to believe that they just messed up and made a bad decision, not that they are a bad person. Therefore they can recover from this action and be an extraordinary benefit for society in the future. Tangney also really hits hard on the fact that, “any honorable community service volunteer would welcome such constructive changes.”(569) This point really grabs the society as a whole that a person may have done a bad thing, but is not a bad person, which is an extremely important step in the rehabilitation process. In the end if you are honorable community service volunteer you will sacrifice some of your comfortableness to let a person become a greater attribute to society. This can be achieved through guilt sentencing instead of a non-beneficial look the other way, shame sentencing. Kahan’s article is quite broad and nonsensical in the fact that he is only focusing on that shame sentencing is cheaper than incarceration and frees up nonexistent prison space. Even so, Kahan never makes the point or shows that he has done any scientific research to see if his “Shame Sentencing”(Kahan 575) is actually beneficial to the offender or that he has looked anywhere to find alternatives to shame sentencing itself.

Kahan’s argument that goes along with this is, “Shame is cheap and effective and frees up scarce prison space for more serious offences.”(576) Our government, our legislature system is failing the entire society with shame sentencing. Judges, legislature, and the public are all turning a blind eye to the fact that if shaming happened to them that it would be humiliating. These groups of people never look past the initial feeling to see that it would make a lot of people angrier or have a sense of, that’s all I get for doing that crime that I was supposed to go to prison for? No time was taking out of their day, no lesson was learned, just a few glairs from neighbors and maybe an employer. That is a horrible mentality to set for an offender, and not to mention that our Judges, legislature, and the public at large, accepts this as an okay punishment. Shaming is making some people furious and yet for some it is not fierce enough. (Kahan 575) Kahan does however state that, “Shame clearly doesn’t hurt as much as imprisonment”(575) Although, if all we are worried about is the hurt factor of imprisonment, then why put so much tax money into prison facilities to make them rehabilitation centers; because we are focused on making this person better for society.

That reason alone is why, unlike Kahan, we need to look for a solution, such as Tangney did. Between these two articles one author stated that shame sentencing is “cheap and effective” (Kahan 575) yet he gives no evidence of scientific research to back up that shame sentencing really is effective. The other author, Tangney, actually backs up and states the fact that shame sentencing is not worth a try. However she gives a valuable alternative that is still just as cheap and not only helps society out but makes that person a greater good to society. This alternative as we learned was, guilt sentencing: this sentencing creates the feeling and or effect, that the offender did a bad thing, not that they are a bad person. (Tangney 568) But guilt sentencing does not stop there for the greater good. Scientific research backs up guilt sentencing with stating that, “feelings of guilt are much more likely to foster constructive changes in future behavior.”(Tangney 568) As a whole community we need to stop being so cheap and actually adopted a method that is extremely beneficial to someone who did just slip up. This person of our nationwide community needs help to get back on the right path without going through the extreme cost and mental destructiveness of incarceration. Guilt sentencing has been more supported by scientific research, than shame sentencing, and it helps a person become a benefit to the nationwide society through community service, rather than getting a name printed in the paper and just being “worth a try.” (Kahan 576)

Alternatives to Incarceration to Non-Violent Crimes. (2016, Mar 07). Retrieved from https://studymoose.com/alternatives-to-incarceration-to-non-violent-crimes-essay 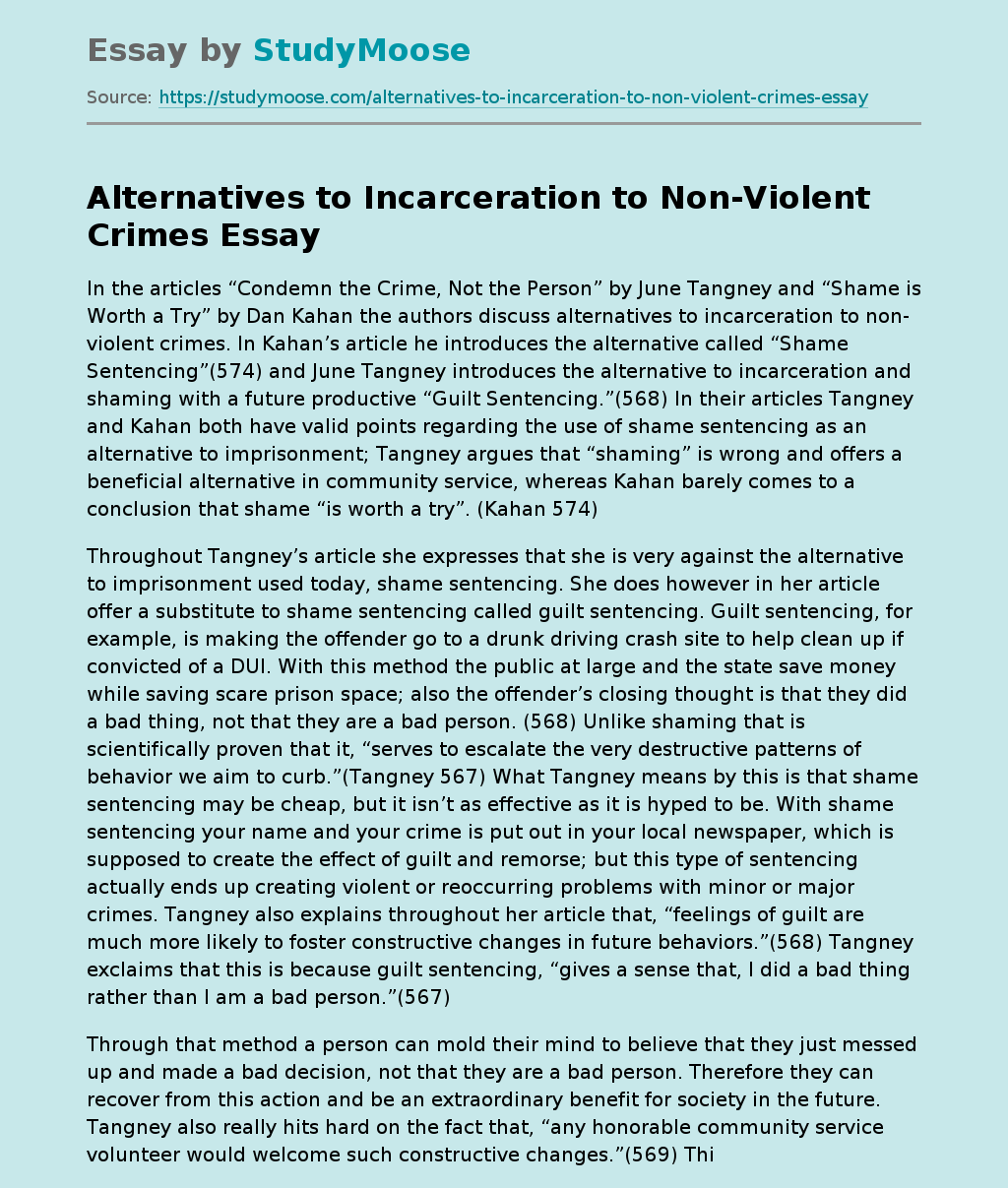