PSTN or the public switched telephone network is the prime network responsible for transmitting and receiving voice, fax and data. All government and private offices, police stations, fire stations, hospitals and majority of homes and business places are serviced by the PSTN line. . Amateur Radio operation does not use ground based infrastructure. Moreover these have limited power needs which can easily be met by batteries and generations. Therefore, it has been experienced that Amateur Radio has worked successfully when no other communication worked.

Turn in your highest-quality paper
Get a qualified writer to help you with
“ Alternative communication system during disaster ”
Get high-quality paper
NEW! AI matching with writer

Satellite based communication systems refer to communication systems designed for users on the earth but have some equipment in space called a satellite. Various jobs such as taking weather pictures or finding accurate positions are amongst the different job performed by different satellites. These are sometimes refered to as COSMAT’s and are essentially radio relay stations in space. Geo-stationary orbit satellites are stationed above the earth at a position around 36000 kms above the equator.

The images of weather forecasts and cyclone observations that we see on our television are made with the help of images from weather satellites. A major disaster (flood, earthquake, etc.) or emergency situation affects telephone exchanges and communication networks thereby disconnecting the affected areas from other parts of the world. In such situations, the urgent needs of disaster affected population are not communicated to government authorities, voluntary organizations and other unaffected people. This result in severe loss of human lives, livestock, property etc. This situation calls for reliable alternate communication links, to ensure that the right resources are provided to the right people at the right time. Asynchronous Orbit Satellites – These satellites are positioned in the lowerorbits around the earth. These continuously change their position with respect to the earth.

To facilitate information and communication applications in government departments at central, state and districts, it has established a nationwide ICT network i.e. NICNET. The Government has designated NICNET as the Government Network. It has gateway modes in Central Government Departments, 35 state and union territories secretariats and 602 district collect orates of India for IT services. BSNL : The Department of Telephone Operations, Government of India was incorporated on 1st October, 2000 and was named Bharat Sanchar Nigam Limited. BSNL is today the largest public sector undertaking in India with a network of over 45 million lines, covering 5000 towns with over 35 million telephone connections, it has become the country’s leading telecommunication company expansion of telecom network, improvement of the quality of telecom in rural areas are some of its major responsibilities. 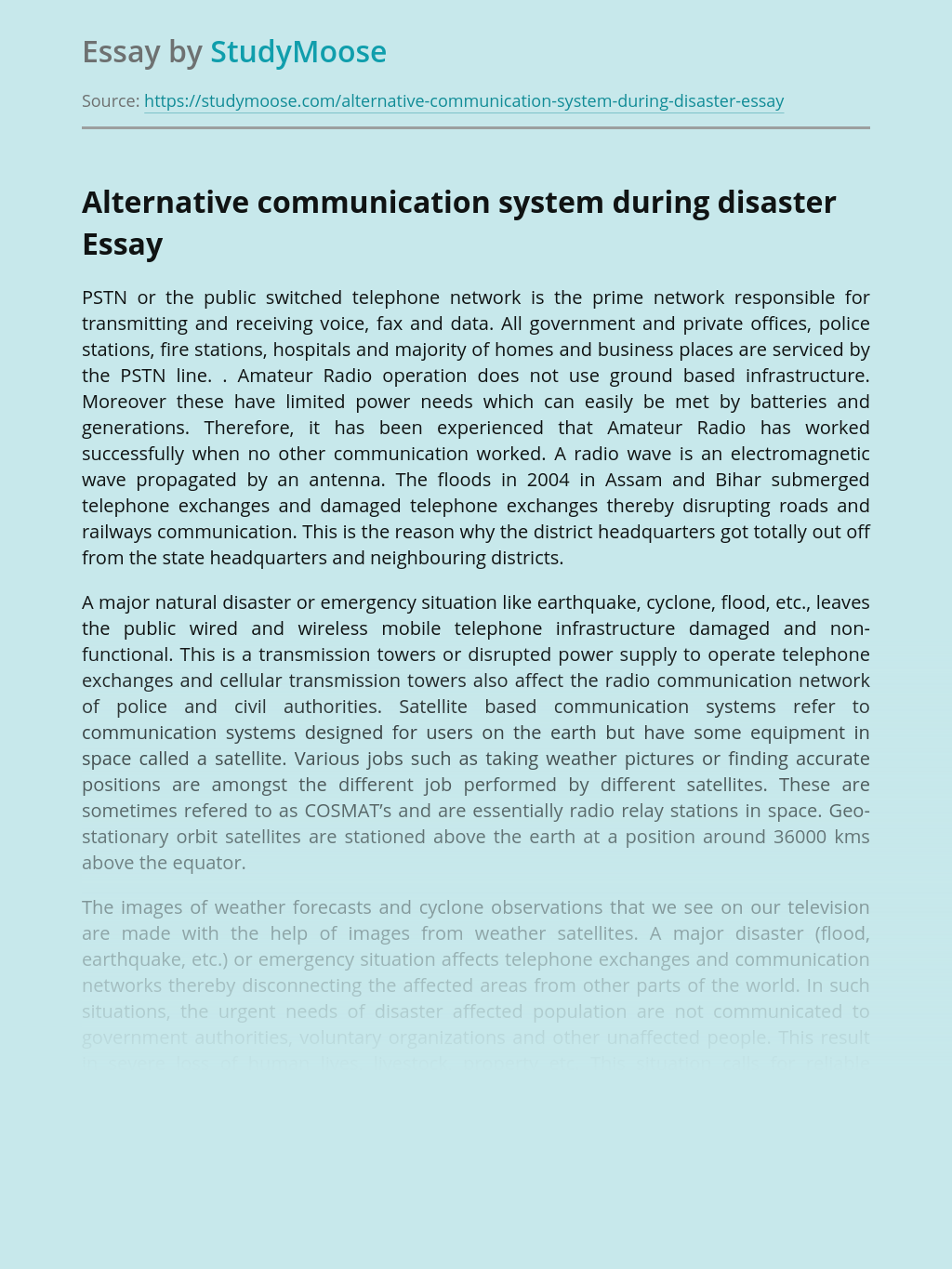 Turn in your highest-quality paper
Get a qualified writer to help you with
“ Alternative communication system during disaster ”
Get high-quality paper
Helping students since 2015
Stay Safe, Stay Original