Allusions in Arthur Millers "The Crucible"

The Crucible contains many allusions, which is a reference to something supposed to be known, but not explicitly mentioned; a covert indication; indirect reference. Miller uses allusions to convey the theological beliefs and religious convictions of his characters.

There is chaos in the town after the people there find out that there might be witches that inhabited the village. Abigail and her friends are accusing people of being possessed by demons. When Hale shows up he is convinced that there are witches in the town and believes Abigail.

This also is irony because Millers audience that is reading the play knows that Abigail is making up these false accusations, but some people in the town believe her and are making her into some kind of religious figure.

In the Crucible there is an allusion to Good vs. Evil. In Act III Danforth says, “a person is either with this court or he must be counted against it”(Miller 1137). The town is religiously and morally based so you are either classified under a believer or someone who believes in evil.

Miller uses allusion to portray Reverend Hale. In the begging of the play Hale came to the town and wanted to make the town pure once again. He believed in everything that Abigail and the girls said and questioned everyone that they had accused. Then he left for a while which was just like Jesus leaving and going into the desert for 40 days and 40 nights. When Reverend Hale returned he talked to John Proctor and believed him. This was like Hale went from this person who believed so much that there was witches in the town to coming to his senses and believing in the facts. We can compare Reverend Hale to John Newton. Newton was a slave trader, who didn’t believe in God and was caught in a bad storm and called out to God for help and experienced what he was to refer to later as his “great deliverance”. After that he became believer and was baptized. So this man went form not believing to believing in god.

John Proctor the protagonist in The Crucible could be compared to Jesus. In the last Act Proctor was faced with an important decision. Danforth offered Proctor a chance to get out of being hung but refused because he didn’t want them to make a mockery of him. So he took his punishment of death. He could have gotten out of being killed but did not because he knew what he was doing was right. Jesus knew the night before that the guards were coming to capture him so he could be killed. Jesus could have run and have gotten away but he made peace with God and died on the cross for our sins.

When Abigail was accusing everyone in the town of being witches people were being hung without fair trials. This was like people in the early century being persecuted when they were completely innocent to begin with. In the end of the play people were started to realize that she was phony and she took off. The Crucible had a lot to due with people’s reputations than anything, which is a form of corruption, which we see a lot in these days. The Crucible contained many allusions that portrayed the bad characters in the play as religious figures. Being such as morally and religious based town he people who were innocent were seen as criminals through the eyes of the town because they believed in something that was truly evil.

Allusions in Arthur Millers “The Crucible”. (2016, Jun 27). Retrieved from https://studymoose.com/allusions-in-arthur-millers-the-crucible-essay 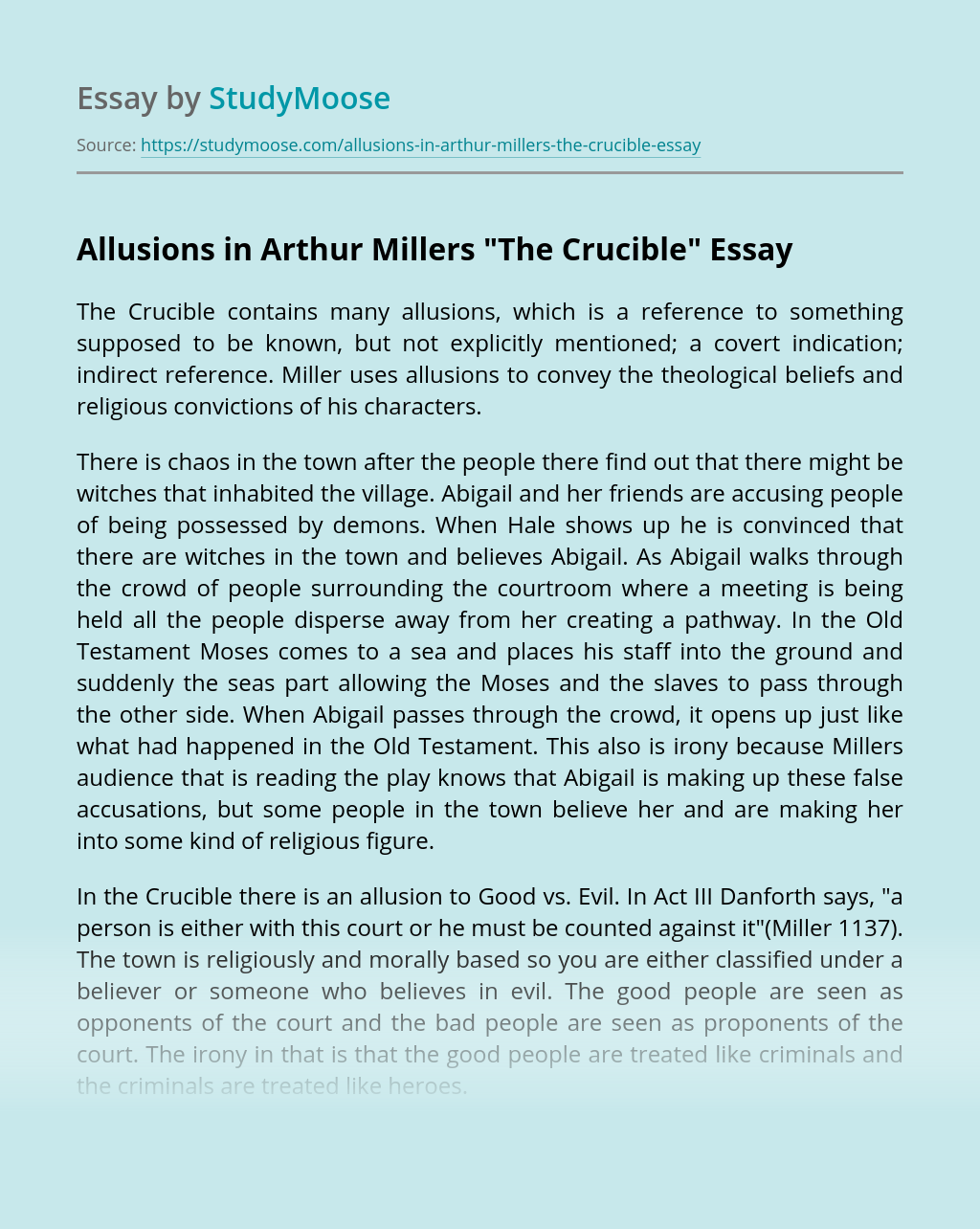 How are women portrayed in Arthur Miller's "The Crucible"?

In Arthur Miller’s “The Crucible”, we are faced with an interesting psychological question: What would happen if the lowest social rank attained power? After all, in the time of the Salem witch trials, women suffered because of their low rank and were expected to submit themselves to men. However, instead of portraying strong female figures,...

The Salem Witch Trials in "The Crucible" by Arthur Miller

In the play the Crucible by Arthur Miller, Miller shows that Abigail is to blame for the Salem Witch trials. A crucible is a test or severe trial. The play is based in Salem, Massachusetts where a group of girls that went to the woods to try to conjure spirits. When the girls got caught,...

Get Essay
Arthur Miller's The Crucible: Gaining Integrity through Failure

Critical Response to "The Crucible" by Arthur Miller

From its ominous opening, to its dad ending, “The Crucible” by Arthur Miller is a play driven by fear and desire, mirroring the McCarthy trials of the Communist hating 1950s. Though its set in 1692, the tone of the play and the themes of intolerance, hysteria, and ruined reputation were very prominently felt during 1953,...

The Crucible by Arthur Miller: Characterization

Arthur Miller was born in New York City on October 17, 1915. Miller composed The Crucible in the early 1950’s and it used the Salem Witchcraft trials of 1692 as a response to the anti-communist “witch hunts” to which miller was accused of. Miller believed that the madness surrounding the witchcraft trials was similar to...

Arthur Miller has been one of Americas best known play writers who emerged in the United States since World War II. He has been writing since the age of seventeen and bases his work on personal experiences while attacking political views. One of his best known works is The Death of a Salesman which is...

Women play a crucial role in the conflict of Arthur Miller’s play, The Crucible. They are the entire foundation to the play. Arthur Miller’s treatment of women in this play shows women as weak beings who give into their husbands. The way women are treated in this play is a reflection of the Puritan beliefs...

The Crucible By Arthur Miller - religion and puritan belief

“The Crucible” by Arthur Miller is set in the seventeenth century and involves the Puritan beliefs and religion. The characters in the play are very religious. Anyone who was considered to be a witch was condemned to death. This was because any sort of witchcraft was considered as worshiping the devil, which is totally against...