The purpose of this lab was to observe the effects of chemical warfare among plants. Plant seeds compete with other plants and seeds, for sunlight, and nutrients in order to germinate. In order to win dominance over other seeds, and reduce competition, plants produce and release a chemical in order to prevent other seeds from germination. This type of chemical warfare is referred to as allelopathy. Allelopathy exists in many parts of the plants such as leaves, roots, stems, or fruits, but not limited to just the plants.

These toxic chemicals can also be found in the surrounding soil, to prevent other plants or seeds from absorbing proper nutrients to stimulate growth. Groups will test for the presence of allelopathic chemicals in plant shoots from the chaparral community. If the hollyhock exhibits allelopathy, then an extract will inhibit the germination, and or growth of the radish seeds.

The group prepared for this experiment in the lab of Professor Sadler at SBVC on the second floor of the HLS building.

First, the groups set up for this lab by gathering leaves that Professor Sadler had already bagged and identified. Each sample was cleaned and striped of everything most importantly the stem, so that all was left was the leaf its self. Then each group weighed out Ten (10) grams of leaves, and then placed into a blender with One hundred (100) milliliters or water. The group then blended the leaves and water until the mixture was a very thin fluid.

Three (3) folded cheesecloth’s were placed into a funnel in order to remove any solids from the fluid itself, then poured into a small beaker, to be used later on in the experiment. Then each group prepared two (2) Petri dishes, by placing three (3) filtered papers in the bottom of each Petri dish.

After the filtered paper was placed into the bottom of each dish, twenty (20) radish seeds (Raphanus sativus) were then placed on top, and evenly distributed throughout both Petri dishes, as to make sure none of them were touching. A final filtered paper was placed on top of the seeds and ten (10) milliliters were of distilled water was poured over the seeds of one Petri dish, the lid was then placed on the Petri dish and labeled “control”. In the other Petri dish, the ten (10) milliliters of the filtered and blended mixture was added to the second Petri dish to make sure the filter papers were evenly saturated. The second lid was then placed over the Petri dish and labeled “ hollycock”. The Petri dishes will then sit for a week for germination and then evaluated.

After one week of germination, the group removed the lids of each Petri dish, and removed each seed that had germinated and measured the length of the entire stem and leaves. Please notice the attached page for the data of each seed. In the Petri dish labeled “hollycock”, Experiment Group A. the group tested a total number of twenty (20) radish seeds (Raphanus sativus), out of the twenty (20) seeds, there was only a twenty-five (25) percent of germination, and only five (5) seeds had actually germinated. The length of each seed varied in lengths from the shortest, three (3) millimeters to the longest fourteen (14) millimeters. Each length of all twenty (20) seedlings were added up and divided by twenty (20) and the group averaged 2.7 millimeters in length of the germinated seedlings.

In the second Petri dish labeled “control”, Experiment Group B, out of the twenty (20) radish seeds tested with just distilled water, a percentage of eighty-five (85) percent of successful germination, and the actual number was seventeen (17) actually germinated. The length of these seeds varied in sized from the shortest of seven (7) millimeters to the longest of ninety-two (92) millimeters. Each length of all germinated seeds from the controlled group were added up and then divided by twenty (20) and the average length of the germinated seedlings is 19.35 millimeters.

As a result of this lab it has been prove that the hypothesis is in fact correct. In reference to the group’s data, the radish seeds exhibited allelopathy, but a majority of them not germinating. Allelopathy derives from two separate words, allelon which means “each other” and pathos means “to suffer.” It is a type of chemical warfare that is used between plants and against other plants. Oddly enough, experiment group B, the controlled group seeds, that received the distilled water, germinated more then the experiment group A, the ones that received the blend of water and hollycock leaves. The only problem that the group faced was that it was difficult to completely blend the leaves of the hollycock plant to make it liquefiable enough to get just enough out to pour over the radish seeds.

Other variables that could have possibly affected germination of the seeds, was but are not limited to, the amount of sunlight that was given to the seeds, and or if the liquid was evenly distributed. Although, the group measured out the exact amount of liquid needed for the seedlings, I can only wonder if some of the proteins or nourishments were left in the solid blending in the cheesecloths? In the end the hypothesis was supported by the groups data as the hollycock did exhibit signs of allelopathy. 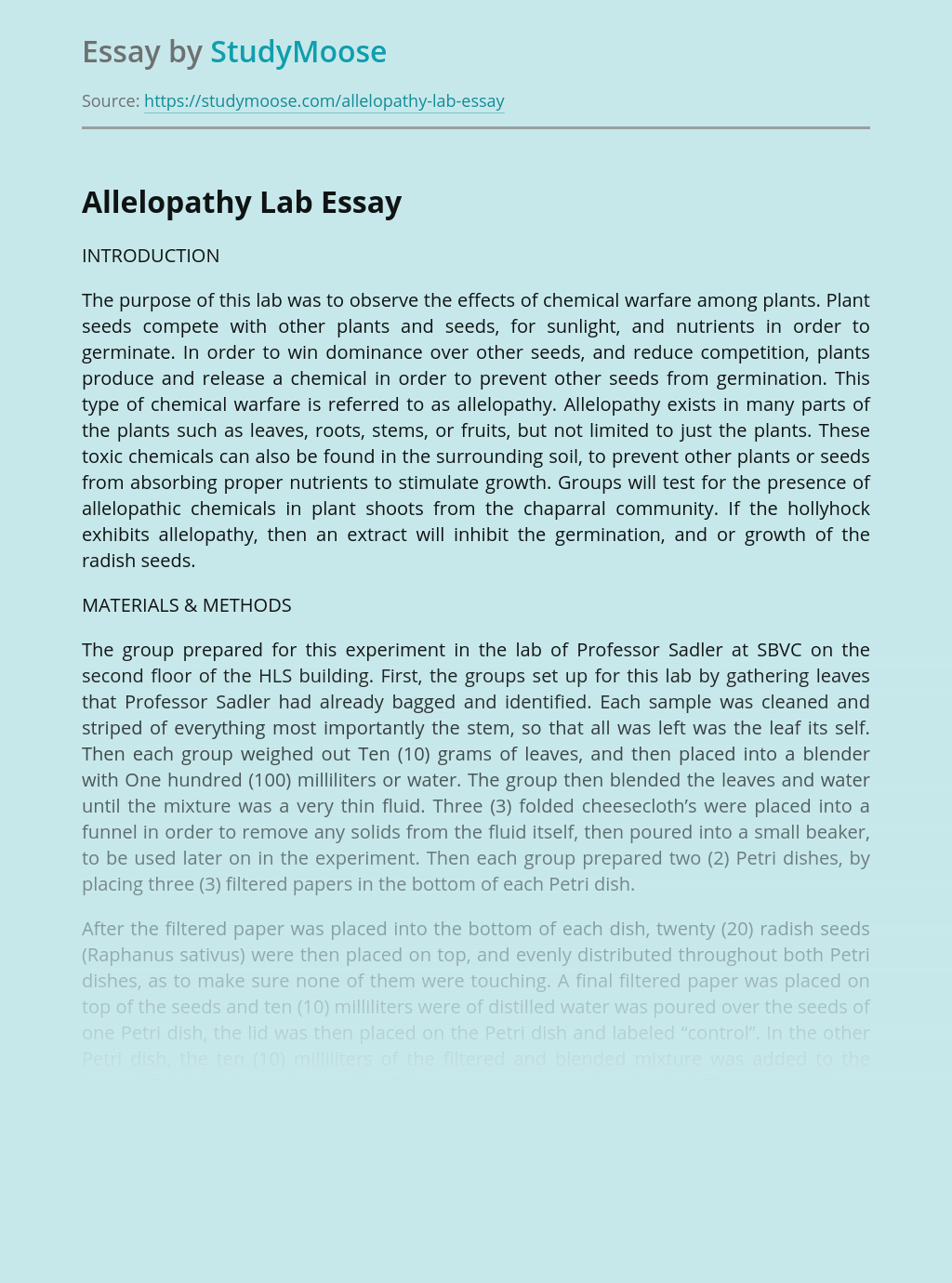