Allegory of the Cave by Plato

As the philospoher Seneca once said, “It is the power of the mind to be unconquerable. ” Raymond Carver’s Cathedral is a story about a man who started out as a closed-minded man but, throughout the story his character changes as he begins to bond with his wife’s friend, Robert, a man who is blind. Plato’s Allegory of the cave is a story about a prisoner who is freed from being locked in chains living all of his life underground and finding out a different perspective about a lie he’s been living his whole life, being told as a conversation between Socrates and Glaucon.

Don't use plagiarized sources. Get your custom essay on
“ Allegory of the Cave by Plato ”
Get custom paper
NEW! smart matching with writer

In the stories, “ Cathedral” by Raymond Carver, and “ Allegory of the Cave” by Plato, both authors argue that a person’s reality is not always what is seems to be. In “ Cathedral,” Raymond Carver uses irony between the narrator and Robert when they talk about the cathedral. The narrator tries to explain how a cathedral looks like with words when he says “ To begin with, they’re very tall.

I was looking around the room for clues. They reach way up. Up and up. Toward the sky. They’re so big, some of them, they have to have these supports.

To help hold them up, so to speak” to Robert who is blind and can’t really apprehend what is being said. (Carver, page 24, lines 448-451). Until Robert asks to be drawn a cathedral when he says “ Hey, listen to me. Will you do me a favor? I got an idea.

Why don’t you find us a pen and some heavy paper. Go on, bub, get the stuff” the narrator realizes that Robert sees by touching around the paper. (Carver, page 25, lines 492-495). What the narrator doesn’t understand is that the blind man can’t see what he sees even though he thinks that by describing with words about how a cathedral looks, helps.

The irony Carver is trying to show is that the narrator is the one who is blind, not Robert, because he perceives his reality to be similar to Roberts but instead really isn’t. In “ Allegory of the cave” Plato uses metaphor about the message that is being compared to an imaginary prisoner’s life. Socrates explains to Glaucon “ Behold! Human beings living in a underground cave, which has a mouth open towards the light and reaching all along the cave; here they have been from their childhood, and have their legs and neck chained so that they cannot move, and can only see before them, being prevented by the chains from turing round their heads.

Above and behind them a fire is blazing at a distance, and between the fire and the prisoners there is a raised way; and you will see, if you look, a low wall built along the way, like the screen which marionette players have in front of them, over which they show the puppets” to imagine a person who is living a certain kind of way for a long period of time. (Plato, page 8, lines 5-14). Then they are told that what they are living is a lie when Socrates says “ And now look again, and see what will naturally follow if the prisoners are released and disabused of their error.

At first, when any of them is liberated and compelled suddenly to stand up and turn his neck round and wlak and look towards the light, he will suffer sharp pains; the glare will distrees him, and he will be unable to see the realities of which in his former state he had seen the shadows; and then conceive some one saying to him, that what he saw before was an illusion, but that now, when he is approaching nearer to being and his eye is turned towards more real existence, he has a clearer vision, -what will be his reply?” (Plato, pages 8-9. Lines 42-51).

Socrates then says “ And if he is compelled to look straight at the light, will he not have a pain in his eyes which will make him turn away and take in the objects of vision which he can see, and which he will conceive to be in reality clearer than the things which are now being shown to him” to explain that the prisoner will want to believe what he is already accustomed not to what has just been told to him. (Plato, page, lines 57-61).

The metaphor that the story compares to is a prisoners life and perspective of reality, once you are told that the way you have been living for your whole life is wrong, you are most likely to be scared of the truth that has just been told to you since the reality that you have been living isn’t what it seems to be. In both stories, “ Cathedral” by Raymond Carver and “ Allegory of the cave” by Plato, both authors use imagery to descibe how the characters in the story are lead to a new reality that has been bestow upon them.

In “ Cathedral” the narrator learns the way Robert sees things when he says “ He ran his fingers over the paper. He went up and down the sides of the paper. The edges, even the edges. He fingered the corners. All right, he said. All right, let’s do her. He found my hand with the pen. He closed his hand over my hand. Go ahead, bub, draw, he said. Draw. You’ll see. I’ll follow along with you.

It’ll be okay. Just begin now like I’m telling you. You’ll see. Draw, the blind man said. ” (Carver, page 26, lines 508-514). Carver reveals that by being very desciptive using imagery, the reader can understand how the narrator is getting really tense in a good way when he is shown that his perspective of reality of blind people just being blind and nothing else is about to change.

In “ Allegory of the cave” the prisoner is being taken to see a new perspective of the way he used to think when Socrates says “ And suppose once more, that he is reluctantly dragged up a steep and rugged ascent, and held fast until he’s forced into the presence of the sun himslef, is he not likely to be pained and irritated? When he approaches the light his eyes will be dazzled, and he will not be able to see anything at all of what are now called realities. ” (Plato, page 9, lines 63-68).

Plato shows that by using imagery in his story, people can notice that the prisoner is in a lot of pain when he is being shown that his perspective of reality of the shadows being his reality is about to change for the rest of his life. In both stories “ Cathedral” and “ Allegory of the cave” both charcters of the story are being shown a different way of thinking. This new way of thinking evolved them into a better self being. Both charcters, the narrator and the prisoner were challeneged into a new way of thinking, both stuck to it till the end, and both became more of a fulfilled person.

Allegory of the Cave by Plato. (2018, Nov 07). Retrieved from https://studymoose.com/allegory-of-the-cave-by-plato-essay 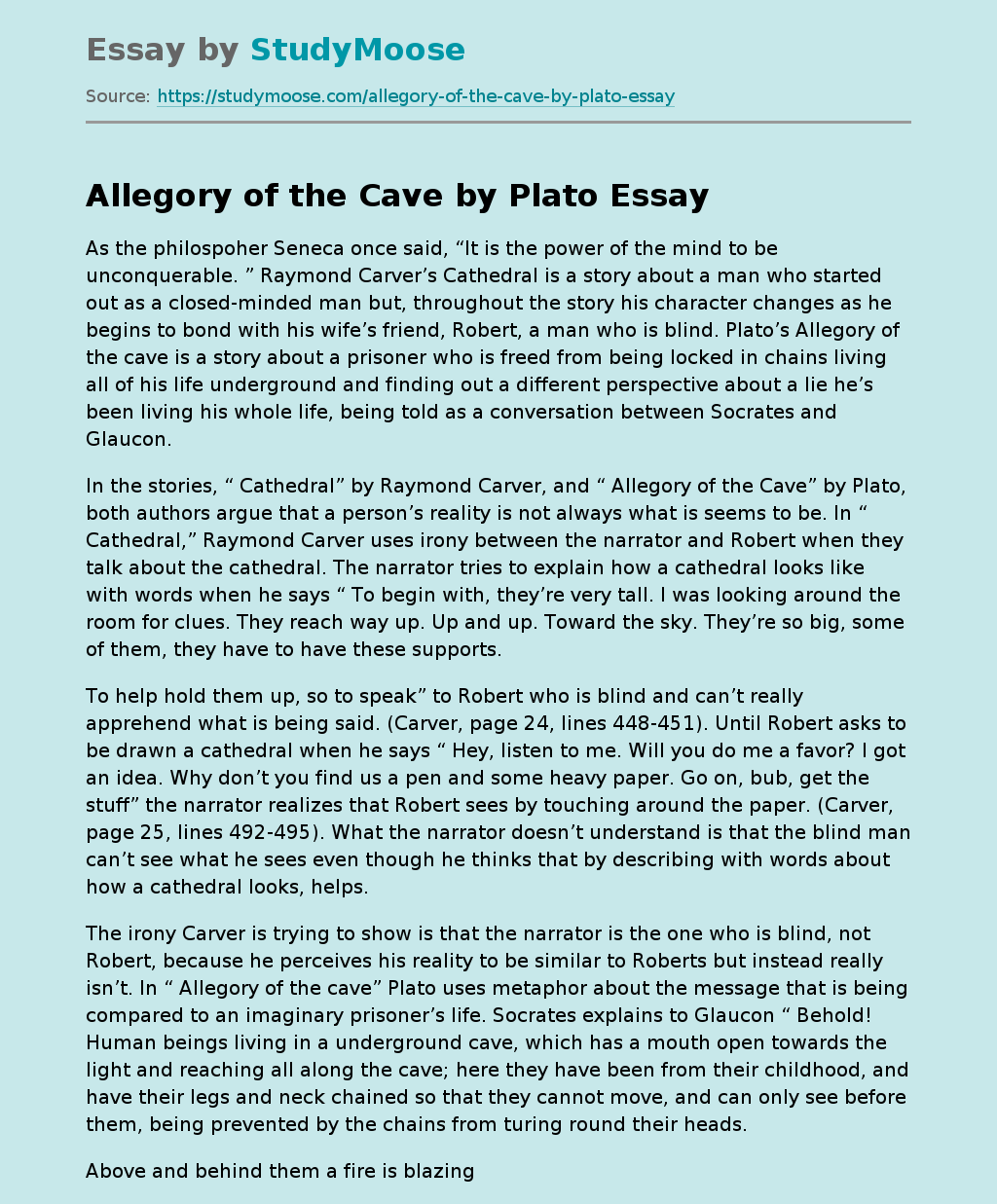