All the World by William Shakespeare

William Shakespeare has been considered the greatest poet of all times. Only school educated, this great poet acquired fame because he had an extraordinary power of observation which he tempered with his brilliant imagination that gave a creative boost to his art. He was also gifted with unique taste of music which helped him to compose beautiful songs and sonnets. His imagination and observation along with a keen ear towards tone and rhythm rendered a sonorous and lyrical quality to his verses- something which was missing in other poets of his times.

Don't use plagiarized sources.
Get Your Custom Essay on All the World by William Shakespeare Just from $13,9/Page

Shakespeare wrote several comedies, tragedies and poems depicting his profound wisdom and psychological understanding of human nature. The poem ‘All World’s a Stage’ is typical example of Shakespearean genius as he metaphorically compares the world to a stage where every human makes an entry like a stage actor, plays different roles and, when time declares, leaves the stage eventually. The poem is beautiful example of his vision of life.

The poet here describes a baby crying and throwing out in the mother’s arm calling for attention. In the second stage of life, the baby is now a school-going child who is unhappy and complaining as is unwilling to go to school but is forced to do so. The third stage in life is that of a lover. Young man in this age is full of deep sighs missing his beloved. He is preoccupied with her thoughts so much so that he sits writing long poems in praise of her beauty. The fourth stage in his life is that of a sincere and ambitious career-oriented professional.

A this age he is competitive, jealous for opportunities, desires recognition even if it involves risk or great danger. Next comes the middle-aged man, well-fed, highly experienced and full of wisdom. He has great sayings ready for every occasion and a remedy for every problem. The sixth stage is that of a retired old man. He is thin and dressed comfortably, wearing specs and a small purse with him. He is wearing a hose of his youthful times which he has saved till now which helps him in walking.

He is grouchy, complaining like a child carrying a pipe in mouth The last stage of life is when man has grown, weak, feeble and lacks strength and vitality. His life is at an end and he has nothing to look forward to. All he has before him is a memory of good old days. He sits reminiscing those times without teeth, eye-sight, taste and everything (hopes, desires, aspirations, etc), patiently waiting for his death.

All the World by William Shakespeare. (2016, Sep 19). Retrieved from https://studymoose.com/all-the-world-by-william-shakespeare-essay 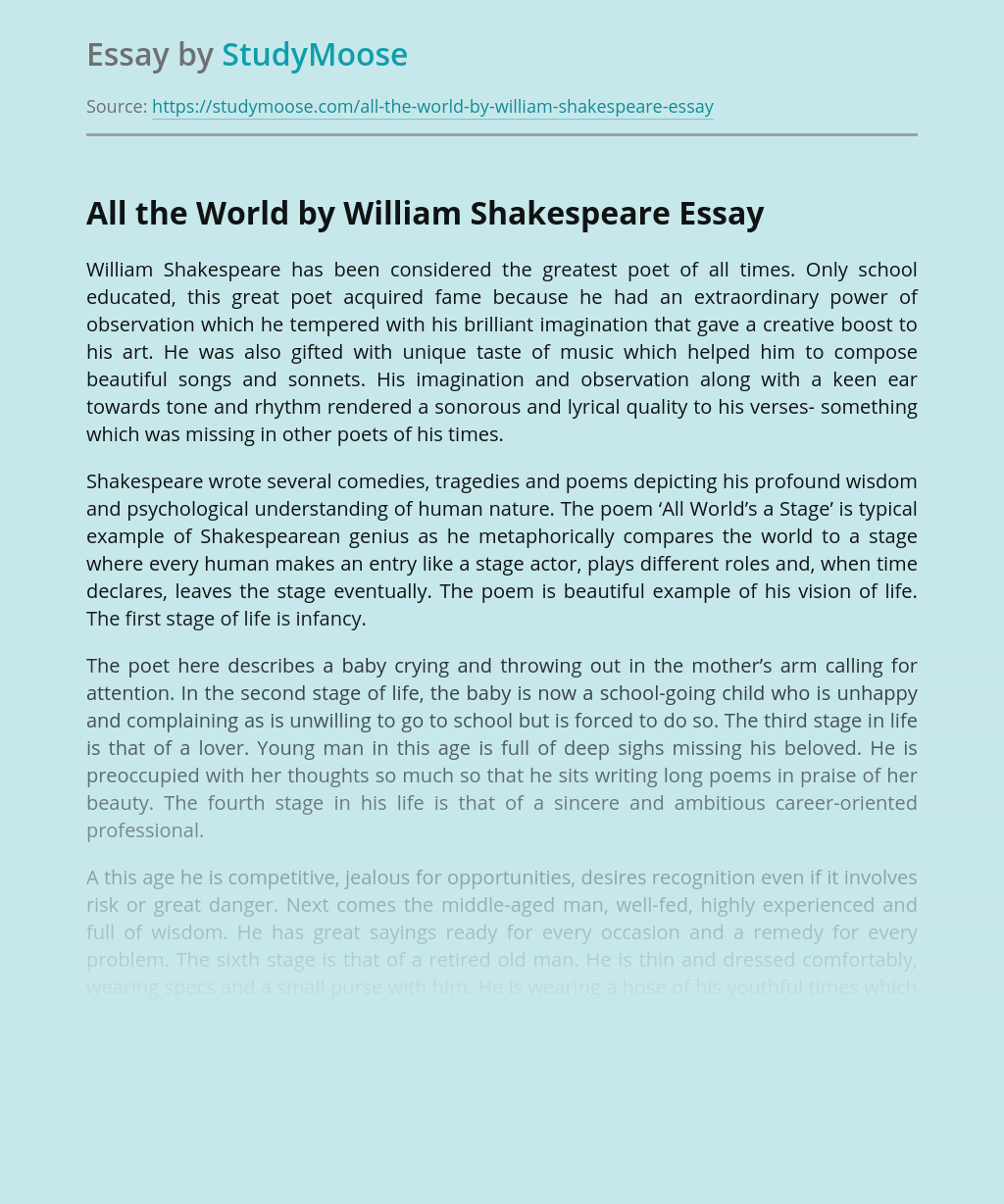 Rate this post Belonging? What does it mean to you? And what are you willing to sacrifice in order to achieve it? As the human need to belong often overtakes us and disregards morals and values in order to do what we crave so badly and connect with those around us. In Arthur Miller’s The...

Hamlet, The Metamorphosis, and Frankenstein

Rate this post Familial relations are often strained in the world of literature, especially between fathers and sons. However, these strains grow when traditional notions of fatherhood are altered or circumvented; so Hamlet has a difficult time dealing with an uncle-turn-father, and Gregor Samsa’s father is unable to truly be a parent to a gigantic...

Get Essay
Cross-Border valuation of projects

Rate this post This kind of analysis is common for companies that are operating in many countries. Groupe Ariel is one such company that is considering investing in a project in its own subsidiary in Mexico. The company manufactures and sells printers, copiers and other document production equipment in many countries. As far as, expansion...

Rate this post Marjane Satrapi‘s graphic novel Persepolis is an autobiography that depicts her childhood up to her early adult years in Iran during and after the Islamic revolution. Throughout the novel Satrapi incorporates character development, religion, and the conflict of freedom vs. confinement in order to develop a greater appreciation between two opposing eastern...

The Quiet American: a Political Warning by Graham Greene

Rate this post The Quiet American by Graham Greene is a novel that depicts a love triangle between a British journalist, an American secret agent and a Vietnamese girl in Vietnam during the Vietnam War. It came out in the mid fifties when the American government was not directly involved in the War. The novel...