In the light of Sofia’s statement above, I intend to centre my discussion on the plight of women, (the usual targets of male violence) by means of physical violence or violence in a domesticated sphere and the economic constraints of the doubly oppressed black women that depend on men, taking into account the feminist theory notions and feminists’ viewpoints. Also how Alice Walker defies the stereotypical notions of male dominance and shows the liberation of women by the end.

Focusing on the dimensions of male violence against women such as battering and rape, Kimberley Williams (feminist) comes up with the concept of ‘‘intersectionality’’ and says that “because of women’s’ intersectional identity as both people of color and women, the interests and experiences of women of color are frequently marginalised within both groups” Blacks were suppressed by the whites but within the suppressed group of blacks, came another suppressed group of women that faced violence on a regular basis.

These women were victims of racism as well as sexism.

As the book opens, Celie (the protagonist who is a coloured woman) is purely a victim: she’s repeatedly raped and impregnated by her father, her children are taken away from her, and she’s sold into marriage to a man who wants a servant, not a wife. The only person she loves, and the only person who loves her, is her sister Nettie. But Nettie is also taken away from her. Celie marries Mr. Albert to protect her younger sister Nettie from the brutality that underwent since the tender age.

Because of the imprinted ideology of the notion that the male sex is considered more superior than female sex is one of the reasons why men victimise the women by rape, battering, insults and mental victimization as well. Feminist theory puts forward that ‘‘Rape isn’t about sex! Feminism’s ideological belief is that all male-female interactions must, by definition, be viewed through the lens of power and domination. Men rape women to confirm their superiority over women. Naturally then, rape also must be seen through this distorted prism. ’ For example, when Mary Agnes pleads for Sofia’s bail, the policemen leave her molested just to confirm their authority over her. Not just rape, but there are a lot instances of domesticated violence faced by women in their own homes such as beating and abusive insults. For the men, their home becomes a sort of a creative social unit where victimisation of the women can be imposed upon without any hindrance. Kimberley Williams in her feminist theory ‘mapping the margins’ says “in a sense the home is not simply a man’s castle in patriarchal terms, but it is also a safe haven from the indignities of life in a racist society.

In many cases, the desire to protect the home as a safe haven against assaults outside the home may make it more difficult for women of colour to seek protection against assaults from within the home. ” Physical violence was a common occurrence at that time in the African-American community and received little or no opposition by those who witnessed it. Throughout the story, several women are severely mistreated by men. Their experiences were considered normal and customary because they had always been subordinated to them.

Even in more loving relationships, like that between Harpo and Sofia, he attempts to beat her because “the woman’s supposed to mind. ” Harpo and the other men in the novel use violence because they believe it is a respectable thing for a man to do to his wife. In more cruel relationships, such as the relationship Celie’s shares with Albert, Celie is beaten on a regular basis for no reason at all. “It all I can do to not cry. I make myself wood. I say to myself, Celie you a tree. ” Severe physical and verbal abuse caused women like Celie to develop detached relationships with their families, friends, and hemselves. The above narrative “she say, all my life I had to fight…. in my own house” is spoken by Sofia to Celie when she finds out that it was Celie’s idea to Harpo to beat Sofia. Not that Celie detested Sofia but the concept of constant battering was so imprinted in her mind that she thought it was the usual way to get women to behave in a certain desirable way. Sofia emerges as a strong character in the novel. She tries to combat her domestic violence by being violent herself. Because of her size and her strength, she dares to stand up to her oppressor and defies the stereotypical male dominance over women.

We see, that not all of the women in The Color Purple are meek and submissive; Alice Walker also provides a strong female model to challenge the male dominated society. Shug Avery and Sofia Butler act as models for the evolution of other characters in the novel. Both Shug and Sofia are described as powerful women but are “not like men, but not like women either. ” The bonds these characters share with the weaker female characters help to protect them as they overcome their assumed subordinate status. Sofia emerges as an anti-steriotypical woman that defies subordination.

While Celie succumbs to the dominance, other characters such as Sofia, Shug, Sqeak break away from the shackles of bondage. Celie’s narrative actually begins as a result of her victimization; her father tells her she’d better not tell anyone that he’s raping her. So Celie goes and confides in God about her struggles. But later on, she realises that the God she needs is not the one she originally envisages because in a family of men, god also does does come to rescue her. Shug Avery, then empowers Celie to believe in a non-traditional, non-patriarchal version of God to whom she can better relate.

This newfound belief liberates Celie in all aspects of her life, helping her to achieve her goal of sexual, emotional, spiritual, and financial freedom. She breaks the pattern of violence and abuse for Celie. The first and most crucial example Celie’s growth is when she announces, over dinner, that she is leaving Albert to live with Shug. “You a lowdown dog is what you is. What’s wrong, I say. It’s time to leave you and enter into the Creation. And your dead body is just the welcome mat I need. ” It is at this point in the story that Celie publicly shows her newfound confidence and respect for herself as a woman.

Without the guidance of Shug, Celie would never have been able to declare her feelings to a man she had previously been scared to speak to at all. Another reason why women may be victims of physical violence or domestic abuse is because of the dependence of women on men. It is not just the inferiority of female sex that confirm the men’s’ dominance over women but also economic constraints such as depending upon men for money and bread may also suggest the idea of women being possessed within the boundaries of economic powerlessness.

Kimberley Watson in ‘structural intersectionality’ believes that “many women of color are burdened by poverty, child care responsibilities and lack of job skills. These burdens are largely the consequence of gender oppression. Economic considerations – access to employment, housing, and wealth—confirm a woman’s dependency on a man and plays an important part in defining the experience of women vis-a-vis battering. ” But Alice Walker presents Celie in the end as a liberated character that breaks free from the chains of economic dependency and opens a garment shop and hires Sofia as her clerk.

To conclude, taking into account the ‘black feminism,’ researchers find five views and ideas of black feminism in the novel—“ (1) freedom to break from the constraining patriarchal ideology, (2) freedom to fight against male sexist oppressors, (3) obtaining freedom by financial independence, (4) obtaining freedom by education, , and (5) freedom to choose and determine sexuality,” and Alice Walker’s The Color Purple, in the end portrays women’s empowerment and rejection of conventional patriarchal superiority over women who were victims of physical violence, domesticated violence and battering due to economic constraints.

She shows the urge of freedom in the characters and that is how she inculcates ‘black feminism’ in her novel. She portrays Celie, the protagonist most prominently that undergoes metamorphosis in the end and all the other female characters defying male supremacy and dominancy. 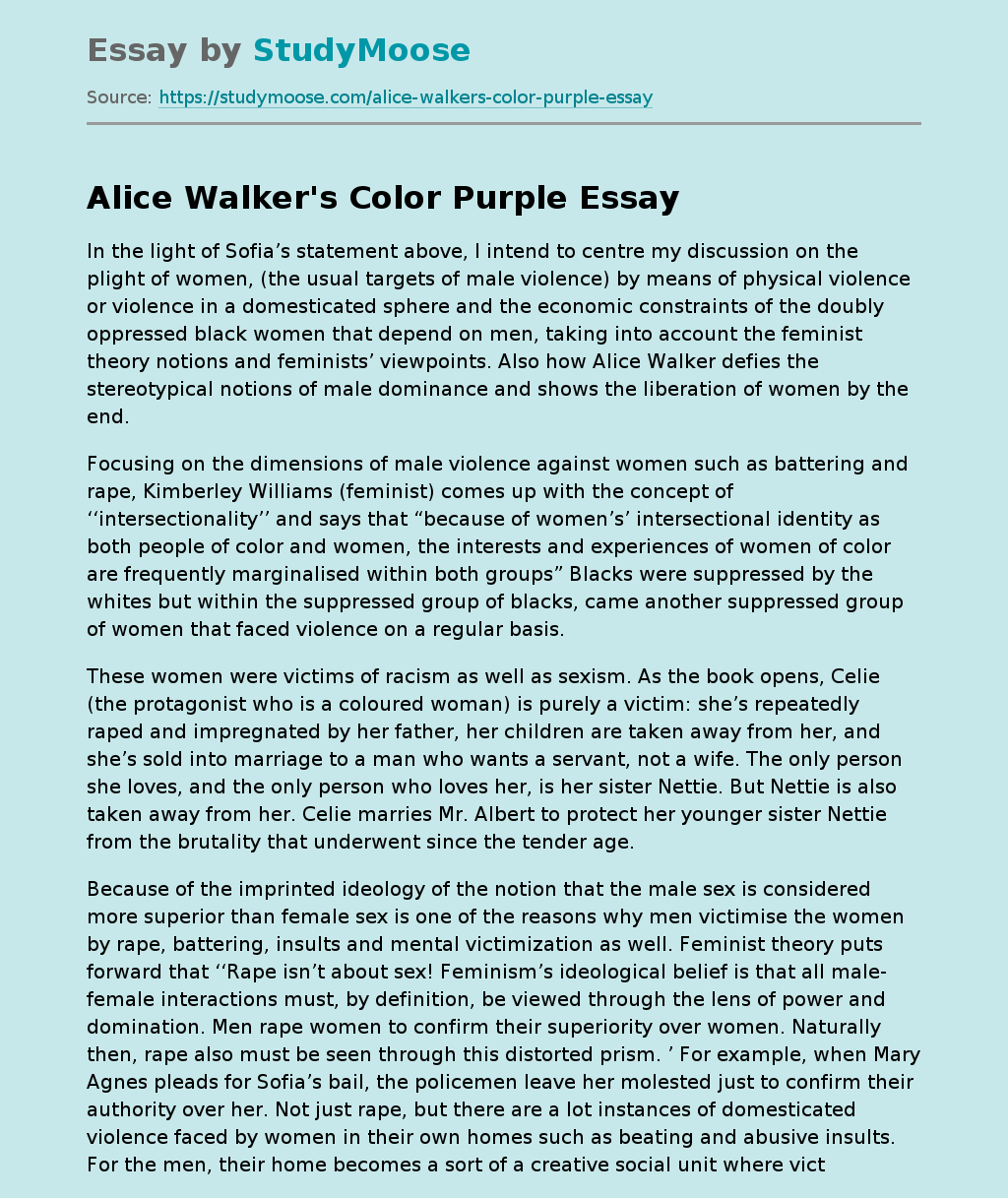