From the creative mind of Alfred Hitchcock came many a classic film, but two that stand out are the thrillers Rear Window and Psycho. These films capture the viewer and create an atmosphere so unique and fresh that you feel as though you personally know the characters; sometimes you even feel like you’re becoming the characters. Although the films have many similarities they both have completely different moods and themes. Most importantly the films can still hold up against today’s incredibly high-budget Hollywood movies.

Don't use plagiarized sources. Get your custom essay on
“ Alfred Hitchcock’s Professionalism in Making Films ”
Get custom paper
NEW! smart matching with writer

A main theme in Rear Window is voyeurism, exhibited by Jimmy Stewart’s character Jeff Jeffries. The same theme is also present in Psycho with Anthony Perkin’s character Norman Bates, but, unlike Rear Window, Psycho doesn’t use it as the backbone of the plot. Reasons for the behavior differ in the films as well. Jeff Jeffries is confined in his apartment because of his broken leg so his voyeurism is a result of his boredom and fueled by his curiosity.

Norman Bates has more of an obsession and his behavior is attributed to his character and not his circumstances. James Griffith put it best in his Film Comment article Psycho: Not Guilty as Charged when he said of Psycho, “…the film disturbs us not because of what it allows us secretly to watch, but because it makes us confront the terror of being secretly watched”(Griffith 76).

According to Cyndy Hendershot in her Journal of Popular Film and Television article The Cold War Horror Film: Taboo and Transgression in The Bad Seed, The Fly, and Psycho, “Psycho represents Hitchcock’s most explicit connection to the horror genre and his most blatant attempt to use transgression as both content in a film and as a marketing strategy”(Hendershot 20).

Although we can regard Psycho as a film of the horror genre Rear Window is more of a thriller because it’s plot elements are a little more light-hearted than Psycho’s. There is tremendous suspense in both stories, but the events in Psycho are much more shocking.

Sound is key in both films as well. Diegetic sound adds emotion while motifs create a distinct flavor. Of course, Psycho has the classic string instrument motif that has been imitated and parodied every since it’s release. In Rear Window we have the gentle, yet eerie music coming from the Songwriter’s apartment. The song adds to the atmosphere of the lively courtyard and gives the film continuity, allowing the story to flow along while we ponder and speculate. In the article Mary P. Nichols says of the Songwriter’s music, “Art can express the complex dimensions of the human experience that can connect separate individuals”(Nichols 125), explaining the meeting of he and Miss Lonelyhearts at the conclusion of the film.

Vibrant visuals contribute to the every emotion in these films. Bright colors give life to the courtyard in Rear Window and sneaky camera angles in Psycho add to the viewer’s paranoia. Psycho was shot in black and white for the small price of $1 million, but the lack of color doesn’t take away from the effect it has on the audience (Wuntch). Low angles hasten the scenes with lots of suspense and unusual perspectives make us feel closer to the characters. The extreme close-up on Norman Bates’ eye when he’s spying on Marion Crane is very personal and shows another side of the character.

Different color filters used by Hitchcock in Rear Window add to the mood. The use of the color orange in the courtyard and blue in Jeffries’ apartment contrast the two worlds. The world Jeffries’ looks out into is separate from the one that he is trapped in. Metaphors are present in both Rear Window and Psycho. Psycho has a bird motif that is present throughout the film. From the famous scene where Norman talks to Marion in the motel office to the name of the lead female role, Marion Crane, birds are a recurring theme. Hitchcock is able to use every element in the film making process to his advantage in creating an enthralling story. From sound, to color, to the lack there-of, Hitchcock produces quality psychological thrillers. “Hitchcock believed that canny art direction and set design were crucial to the mood of the picture”(Rebello 67). 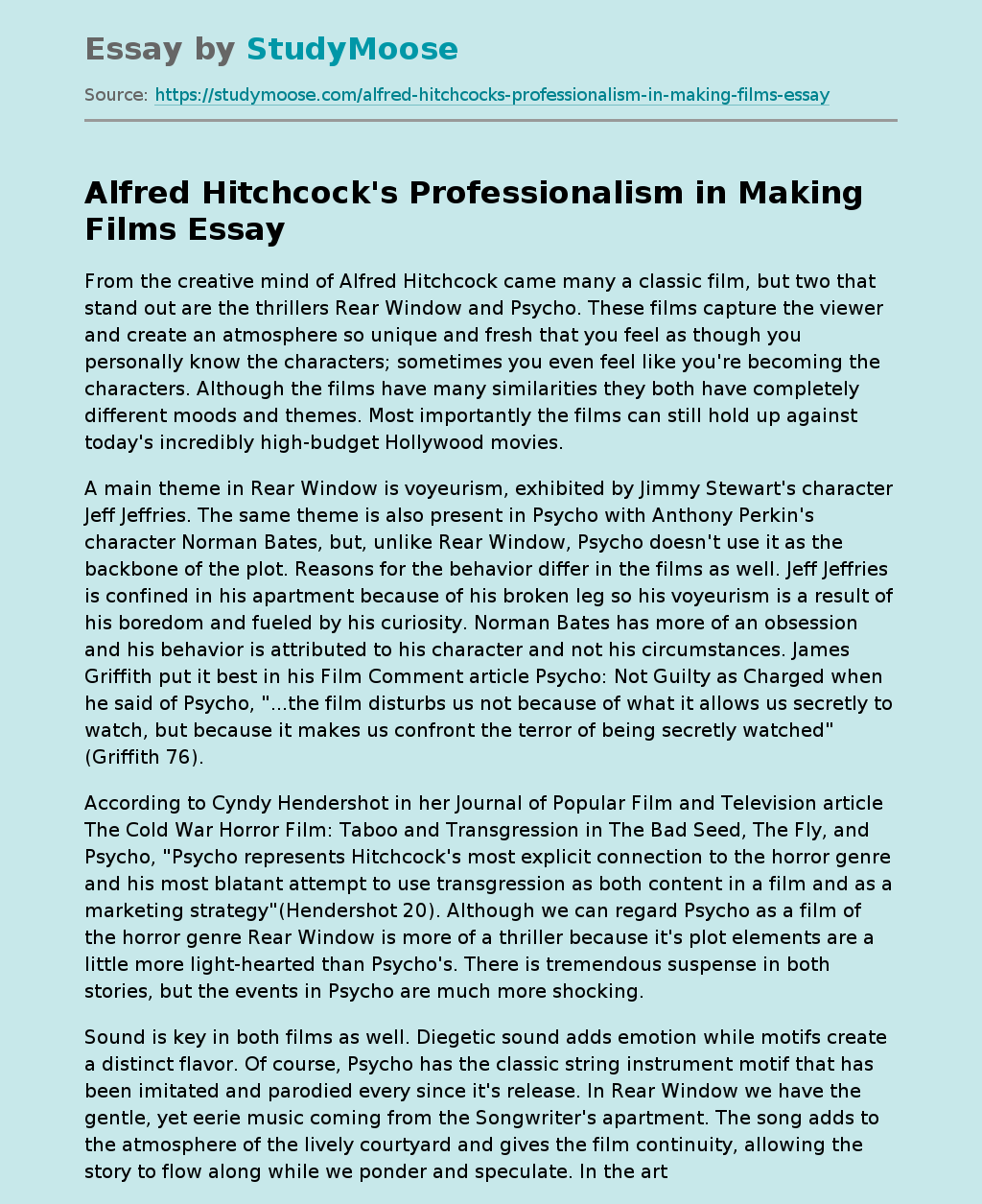