For every Hitchcock’s story come suspense, drama, terror and exhilarating scope of life’s spectacular event. Alfred Hitchcock who was an English made the word “mystery and suspense” attached to every story he has to tell. He has been a productive writer, director and an ever mysterious of a man himself ever since he was young man in the 1930’s. His passion for storytelling and direction always catch the ever hungry public for horror, suspense and drama. AH revolutionizes filmmaking with deep mystery and a shady touch.

Don't use plagiarized sources. Get your custom essay on
“ Alfred Hitchcock ”
Get custom paper
NEW! smart matching with writer

He started writing and filming since the movies was in black and white. Here are some of those who made it to the editors and reviewer’s desk along with the reference.

The story goes – Archeology Professor Indiana Jones escapes death from poison dart, lots of falling and breaking of bones. A large boulder even nearly pinned him to a pulp. This is just to get an old Indian idol for his collection. He ended up being beaten by Belloq for the prize. Belloq, his old arch enemy is always on his tail and as he is, always determined to fight to the last to any precious thing they can catch.

Confronted with many enemies and obstacles he failed to have the idol but instead getting back alive.

Back to the university he was told that an old archeological society established by the Nazi was in Cairo for a mission to lay hands on the Ark of the Covenant which Indy assumed is the real resting place of the lost Ark.  The Ark is where the 10 commandments are kept. Indy as an archeologist discovered that the Ark is keeping a powerful energy which if fall in the wrong hands could cause disaster with the world. Being in love with adventures he went away straight to Cairo picking up his girlfriend and friend on his way. Danger is everywhere from Nazi thugs in their every way to poisonous snakes on the Ark’s hiding place.

Belloq being bold and daring as Indy was hired by the Nazis to lay their hands on the Ark. Being able to get the Ark, the Nazis hired Belloq to steal the Ark from him. Belloq succeeded again in having the Ark. Together with his friends Indy who is determined with his every action launches another neck-breaking move to get the Ark back and finding himself fighting for his life again especially when he dealt with a giant German thug. The Nazis having the Ark have to drive again to Cairo to make the ritual in opening up the Ark. With the path full booby traps and enemies the Nazis are determined to stop Indy from his track doing all their things to kill him. He however survived and be able to stop the Nazis with their black intention.

This movie was now a classic but the director behind it has made history up to our modern world of cinema. Spielberg was hailed as one of the most productive and genius director of all time. And he owes it partly from the influence of Hitchcock and his style (Pallison).

The story is based in Hong Kong and the year is 1962. It is a story of love, infidelity and integrity which catapult into betrayal and immorality. Two people met at the wrong place and at the wrong time which made the film more intriguing to watch. Two married couples met and live in a neighborhood and the beginning was a friendship.

Having spouses who are always on the run for business have inadvertently discovered that their spouses have a clandestine affair. Ironically the two cheated souls met and work for the same project. Knowing they both have been deceived with their spouses, the two main characters have their very own chance of vengeance. But the vows which they promised were holding them back. In effect the drama of keeping the love back and fighting for their rights of being cheated added to the emotion in this movie.

Infidelity is the name of the game and the characters Chow Mo-Wan (Tony Leung) and Su Li-zhen (Maggie Cheung) were very much convincing and make this drama more heartfelt.

Directed by Wong Kar-Wai, who was considered Hong Kong’s cult director is one of the famous directors in Asia and now making a name in the world of directorship.  He admits his literary influences and cinematic skills from the likes of Martin Scorsese to Alfred Hitchcock.  Doing this movie, Director Kar-Wai thought that this is just an easy film thinking that there are only two main characters in the whole film. But realizing that the story relies not only on the main characters but with the details of describing the whole sentiments of the film it was developed into a subtle and one of the most romantic film ever made by an Asian director (Teo).

A psychological thriller that tells the story of a father who seems to be psychologically insane even to the point of torturing his own son for the sake of his own mad experimentation. It is a disturbing film not be recommended to be watched by the innocent mind. Playing as the killer in this movie is John Lithgow who is very effective in this movie brutally torturing and murdering children for the sake of his experiments.

Director De Palma has indeed put the proper angle for every scene to put the movie in its incredibly moving and thrilling effect. Although the movie has been rated R by many critics and disturbingly enough for the common people. This movie depicts some of the grossly-event that from time to time happening in our world today. Children are the victims in this movie and that really happens. In reality women are also the main victims because of their vulnerability.

Brian de Palma is now on his fifth decade as a director. He is the most visible American director working to such ardent, usually violent and passionate movies. He is critically acclaimed to be one of the most suspenseful and exciting director of all time because of his dedication to art in producing films that are always exciting, intriguing and mockingly curious. He is explicit with every angle in his camera, fluent in the description of movements, and stylish with his combination of elegance and violence. Admittedly getting influenced by Hitchcock, he deliberately put the audience holding their breath and letting a shriek of terror whenever a piece was delivered (Barry).

Starring Paul Newman who was once a former drunk, a private investigator and a cop who is about to retire. He now lives in with a couple who had a runaway daughter. Harry Ross (Newman) helped in finding and bringing her back but almost died when she accidentally shoot him instead. Bringing her back alive and him wounded, the couple managed to keep him as a bodyguard, a house help, and even a member of the family. Being alone and retired his bonding with the family has grown. Unknowingly, Jack (Gene Hackman) who owns the house has secretive scenarios unknown to the family.

When Jack discovered that he is dying of cancer, he asked Harry to deliver a package to a certain woman named Gloria Lamar. Being confident with his friend’s request to simply deliver a package made his world turned upside down. Unfortunately the package was discovered and contained elements that lead to blackmail and murder which involved Jack.

The sudden twist of this movie has a gripping and suspenseful events which on first viewing was such so simple and melancholic. In the later part of the movie and understanding all of the twist, the climax of the movie has been revealed.

Directed by Robert Benton. Benton was considered one of the most popular and productive film makers of the 60s, 70s, 80s and 90s. His ever changing style in making his film has made him great and it is clearly shown in his films. Together with Newman in making this film they tried to make this movie more like a Hitchcock thriller with the style of other great directors. This film has made it and considered one of the top-earner films of the modern era. Benton has always tried to copy Hitchcock style of suspense and thrilling cinematography and it does not fail in every film he made (Williams).

From the best classics that Hitchcock written or directed to the last movies in the last decade of his career Hitchcock has always been firm with his films to produce those hair-raising, thrill getting and full suspense films. He has already made a historical and symbolical symbol to filmmaking which our present film makers are now making his movies and style their reference and guidelines. From the budding director to a movie great filmmaker, Hitchcock would always come up as the “one” who made filmmaking an entertainment industry.

He started his own style in black and white cinematography and silent movie and yet he was able to bring his audience with surprise and terror. Until today there are critics who are hoping to see a trace of Hitchcock’s suspenseful part for every movie they evaluate. In the kingdom of movie industry, people knew him to be a prolific and mysterious writer without the love for popularity and lights on him.

For a movie fan who loves his movies he will always be the silent, mysterious man behind those cameras ready to frighten you out of your wits, hold on to your seats and gasp at the sudden flash of a surprise before your eyes. Before you knew it, your eyes are widened with shock and exhilaration envelops you. You are watching a Hitchcock movie and be prepared.. 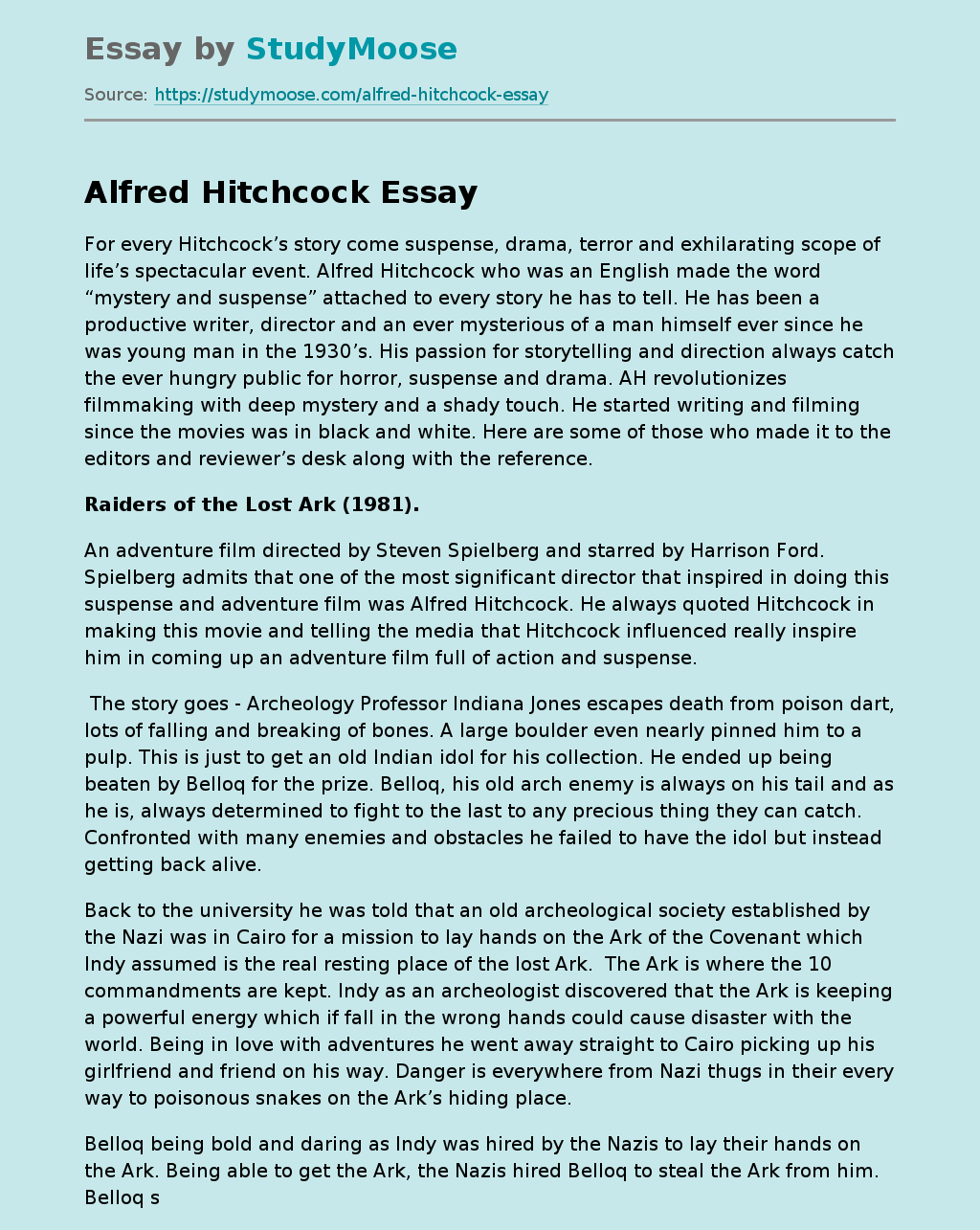