What is Alexis de Tocqueville’s assessment of the state of race relations in the US? What kinds of futures did he predicts for the different ethnic groups? Were his predictions accurate?

S conditions of new American world. Tocqueville’s book Democracy in America in 1830s which he described America as “absolute democracy” [3]. He uses comparative method in order for him to observe, compare American with Europe, as well as ethnography research achieve an insight of American political system, racial structure on different ethnic groups. Tocqueville’s assessment of the state of race relations in the United States is understand people’s lifestyles e.g. individuals from different ethnicity such as Native Americans and African-Americans.

However, Tocqueville was writing in the 1830s where slavery was abolished in the North but the “preoccupation … minds” has not changed [4] majority of white individuals has not changed their ideas about slavery so they were very hostile towards African-Americans and Native Americans. Although he argues that north were far more accepting of American-Americans to granted their freedom than the south because they still see the “black race is relegated” therefore, increase its rigors as they’re disgusted by the idea of slavery abolishment.

Tocqueville believes that democracy could be the main reason of state of race relations in American because it builds on the idea of racial differentiations. He believes that Democracy views other races as substandard. This will then contribute the ideas of the oppressions and segregation of ethnic groups like the Native Americans and African-Americans because according to white individuals they had no rights, no freedom and opinion in society. It creates a division between races, constructs racial hierarchy leads to ethnic minority groups like Native Americans and African-Americans bottom of the racial hierarchy. Consequently, Tocqueville views on state of race relations as apprehensive but, yet he believes that the “white man, European man [race is] excellence, below him appear the Negro and the Indian [4].Tocqueville supports the idea that some races such as European races were at the top because they were superior, has highly intellectual skills. While, other races like, Native Americans and African-Americans viewed as inferior because he believes that they had lower intellectual skills. Because of this Tocqueville is biased, because, he, himself is part of the white European race which makes superior. Although, he suggests that democracy destroys the mind sets of ethnic minorities which makes individuals forgets about their ancestors [African-Americans] and their descendants [Native-Americans] so, leads to ethnic groups who does not have any identity/identities.

He argues that this is what is happening in America in terms state of race relations because the white individuals has manipulated, corrupted the minds of other ethnic groups. During, the Tocqueville writing period Native Americans were seen as savages and African-Americans were seen as properties, in hard labour. He argues that both race groups were seen as dispute, dispossessions, and considered as inhuman. Ethnic groups were viewed as part of the animal kingdom he believes the reason why they were treated like an animals. For instance he describes the “European[s][ as the top] man of other races is to [make] them animals? [White Europeans] serve his purpose and when he cannot bend them he destroys them” In other words, Tocqueville implies that perhaps no-one from white race will ever sympathises with the two ethnic races, so it was acceptable for any white individual to do whatever they intended to do with native Americans and African-Americans because their race, their lives were seen as irrelevant, unimportant living in the land of America. Both ethnic minority groups did not have any rights or equalities like the white individuals did. Tocqueville see Native Americans and African-Americans (slaves) are connected to democracy because they were both socially excluded part of democracy side of society. Tocqueville argues that opinions like this then leads to democracy being based on the idea slavery of African-Americans viewing it as satisfactory. Democracy subsidises the idea of racial segregation, racial superiority and divisions of races which he suggests could be a great danger to society.

In addition, Tocqueville saw the state of race relations against Native Americans was overwrought, they had an “instinctive love of their native country attaches them to the soil that has seen them born and they now find nothing there but misery and death”. (4). In other words, Tocqueville believed that their homeland is now occupied by the white individuals until the end of their lives or, perhaps, the inevitable destruction of the Native Americans. For the reason that the idea of westward expansion meant that Native Americans had been forced to move somewhere else “move out; they go to inhabit new wilderness, where the whites will hardly leave them in peace for ten years” [4].

Tocqueville supports the idea that Native Americans inhabited North America well before the white Europeans did, they lived by their own tribal customs, norms, values, religious beliefs and laws. However, Native Americans are now seen as dispossessed through the formalities of the law “it is impossible to destroy men with more respect for the laws of humanity” [4]. Tocqueville argues that the government will not grant them their own enjoyment of Native-American leaving in freedom so they had no elite but to possess this crucial primarily for lifestyle of civilisation. This could be one of the reasons of their segregation in American- they chose not to be civilised because they had planned on keeping their own cultures, customs and traditions. Native Americans “repels civilisation perhaps less in hatred of it than in fear of resembling the European’ [4]. Although, Tocqueville implies that it is challenging for Native- Americans to acquire it- this could be because they are not used to white cultures perhaps see white customs and lifestyles as dishonour, perhaps evil this could be the reason why native Americans did not accept civilisation or seen as part of the race relations. Even if they did accept civilisation there will be prejudices against Natives American which will prevent them from becoming civilised which then obliges them to it. In contrast, Tocqueville suggests that Native Americans still had some acknowledge their identities cultures compared to other races such as African-Americans because America is their homeland therefore native Americans will do anything but to be assimilated perhaps so they can their sense of pride, and dignity.

Furthermore, Tocqueville juxtaposes the view of African-Americans in terms of state of race relations compared to his views on Native Americans. He believes that African-Americans had lost all their sense of cultures, traditions, identities and individualism because “the habit of servitude has given him the thoughts and ambitions of slave”…..[African Americans] had no longer understands the language that his [fore] fathers spoke…creasing to belong to Africa”. Tocqueville argues that it will very challenging for African American to regain their cultures and identities because they are now trapped between two societies being divided from their homeland means that they have nothing to gain in American society. Tocqueville emphasises that African-Americans knowledge has not developed properly therefore, they cannot think of anything more of themselves than to view themselves as a slave. Even when they are freed or grant their own freedom African-Americans will themselves as below the white Europeans/Americans because it what they have been taught, or perhaps they had little knowledge of civilisation which will lead to still respects them rather than despising against them .Tocqueville suggest that even if African-Americans are freed they will still face prejudices- deep racism which they will have to face in on daily basis with jobs, educations. Tocqueville questions their freedom because they are still oppressed and segregated from society just like other ethnic minority groups because even though it might be illegal to enslave African-Americans there are still white individuals who has reinforced ideas that you cannot abolished.

Tocqueville’s predictions for ethnic minority groups is that they will still face three main prejudices which will be more intangible, more tenacious than before the abolishment of slavery. This will be the prejudice of the master, the prejudice of race and the finally the prejudice of the white individuals. He argues that it will difficult for white individuals to accept ethnic minorities groups, even though, the law has changed their mind sets have not changed. He believes that it is not the interests of African-Americans but the interest of the white individuals for the reason why slavery has been destroyed in the United States. Although, Tocqueville believe that in the future black and white will mix creating an inter-racial society however, this will still leads to unsettled tensions in America because the future of white individual in American especially south of America is connected to narrow-minded whites slave owners who will see freedom of African-Americans slaves as outnumbered.

On the other hand, to contradict Tocqueville predications about ethnic groups. Native Americans one could say in contemporary Untied States Natives Americans have become more civilised as well as trying to keep their own traditions and customs. Plus, Native Americans are more accepted, and respected by the white Americans than they did in Tocqueville’s writing period. They now have their own freedom, independence and laws to support them against any racial prejudices for instance the National Indian Youth Council was formed in the early in 1961 which consists of sixty tribes, who formed their own treaty rights in disputed waters and territories, stand up for their rights such as the Native American Grave Protection and Repatriation Act 1990. Some Native Americans are even known as ‘Red power’ which is a new language that set ethnic minorities apart and against the undifferentiated white America. [1] However, to support Tocqueville is predictions of Native Americans it seems that even in the contemporary society they are still been viewed as “savages standing in the way of civilisation”.[1] As well as the Native Americans in post-modern society are being more extinct than before.

Overall, it seems that Tocqueville’s writings and ideas on race relations on ethnic groups is still being used today to show how far ethnic minority groups have improved within society even though there might be still some discrimination against them however, society has integrated with Native-Americans and African-Americans than in Tocqueville’s period. 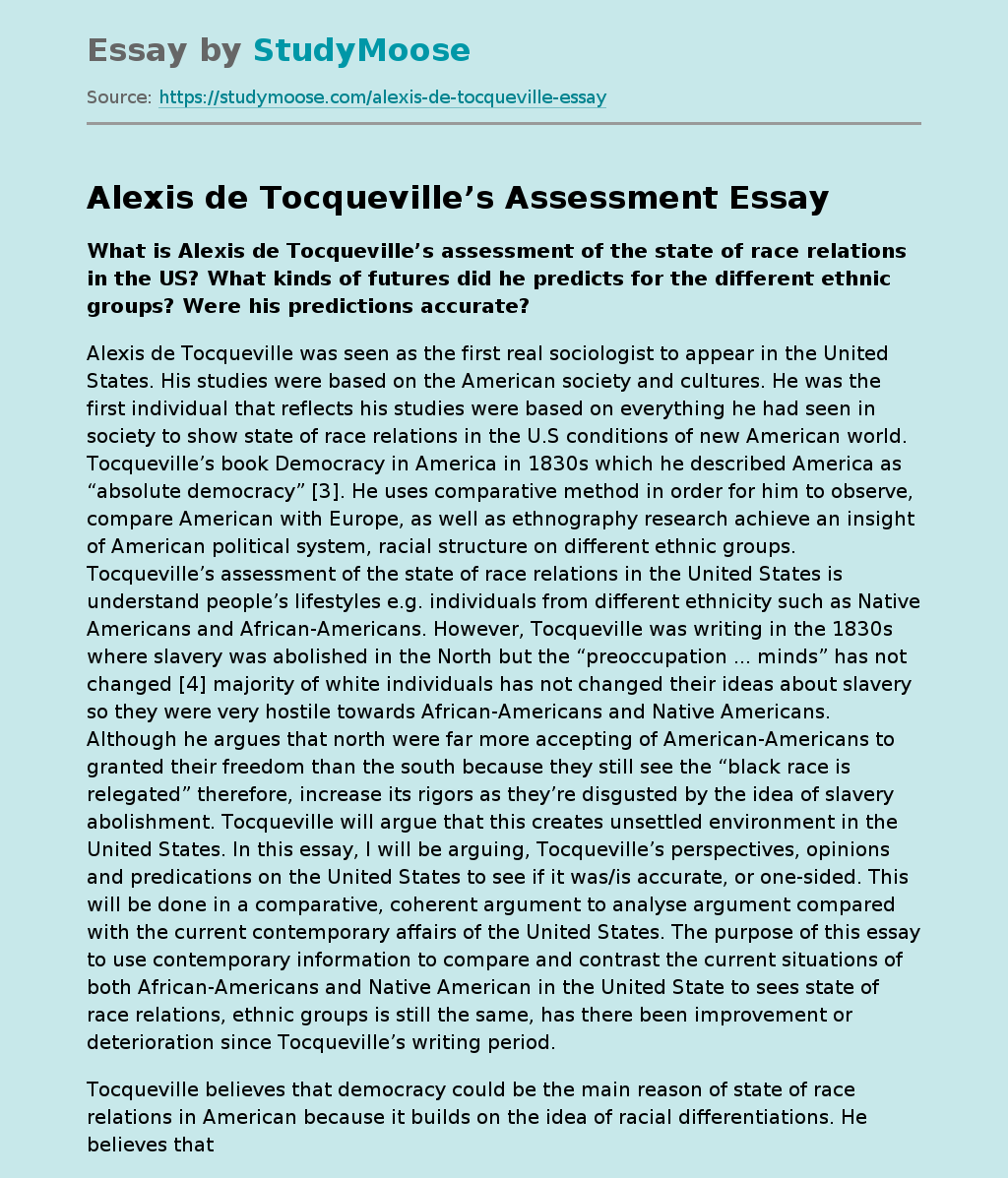