Basing his poem on an actual incident that occurred among some of his acquaintances, Pope intended his story to put the episode into humorous perspective and encourage his friends to laugh at their own actions.

A mock epic is a poem dealing with petty subject matter in the exalted style of the great literary epics. This genre is a form of parody for satirical purposes. The poem uses the trivial story of the stolen lock of hair as a vehicle for making judgments on society and on men and women in general.

Don't use plagiarized sources. Get your custom essay on
“ 18th-century high society through exaggeration and parody ”
Get custom paper
NEW! smart matching with writer

Characteristics of the ILLIAD and the ODYSSEY that the Rape of the Lock mocks include: the statement of the theme, invocation of the muse, description of the great battles, supernatural beings taking part in the affairs of men and the hero becoming immortalized in a star or constellation (Long, “Pope” 1).

In the opening lines “What dire offense from amorous causes springs, / What almighty contests rise from trivial things” (Canto I, lines 1-2), Pope states the theme of the poem: that trivial matters should remain just that- trivial.

In the lines following the invocation of an unlikely muse is clearly stated “I sing- This Verse to Caryll, Muse! Is due” (Canto 1, 3).

The entire poem is divided into five cantos and is written in heroic couplet verse. The use of the heroic couplet is typically neoclassic because it exhibits the ideals of the time. In order to write a heroic couplet the author must have complete control over his words and the story he wants to tell.

A strong sense of order is needed so that the couplets may rhyme and most importantly make sense to the reader at the same time. The heroic couplet perfectly accents the epic devices used in the poem, for, as a form of verse the heroic couplet seems to have a connotation of larger-than-life-situations in the minds of its readers. By using this style in describing such insignificant matters in his poem, Pope only supports his theme that his society places great importance on minor matters.

Pope’s elaborate portrayal of events in Canto I furthers comparison with the literary epic; it parodies the traditional epic passage describing the shields of ancient warriors. Belinda’s make-up routine is compared to the putting on of armor: “From each she nicely culls with curious toil,/ And decks the goddess with the glittering spoil” (Canto II, 131-132). Make-up, clothing, jewelry and other material possessions are this parody’s substitutes for armor and weapons. Pope closely imitates the epic form for comic effect in order to expose the questionable values of his time. “Using a vast force to lift a feather” (Long,”Pope” n.p.), thoroughly describes Pope’s reasons for his use of elaborate language.

He uses the epic’s exaggeration to mock misplaced priorities. The great battles of the literary epic are transformed into card games and flirtatious charades. The great Greek and Roman gods are converted into an army of protective but powerless sprites called “sylphs” who protect both the serious and the trivial. For all of her strife “This Lock, the Muse shall consecrate to Fame, / And mid’st the Stars inscribe Belinda’s name” (Canto V, lines 149-150). Belinda is immortalized in the sky by a star bearing her name.

“Satire is a glass wherein beholders do generally discover everybody’s face but their own” (Long, “Racine” 4). Pope uses every aspect of the mock epic to satirize the frivolity of the people around him. He takes specific scenes and uses parody to illustrate the insignificance of everyday rituals. He even uses the structure of rhyming couplets to juxtapose the ordinary with the extraordinary to reveal the society’s distorted value system. 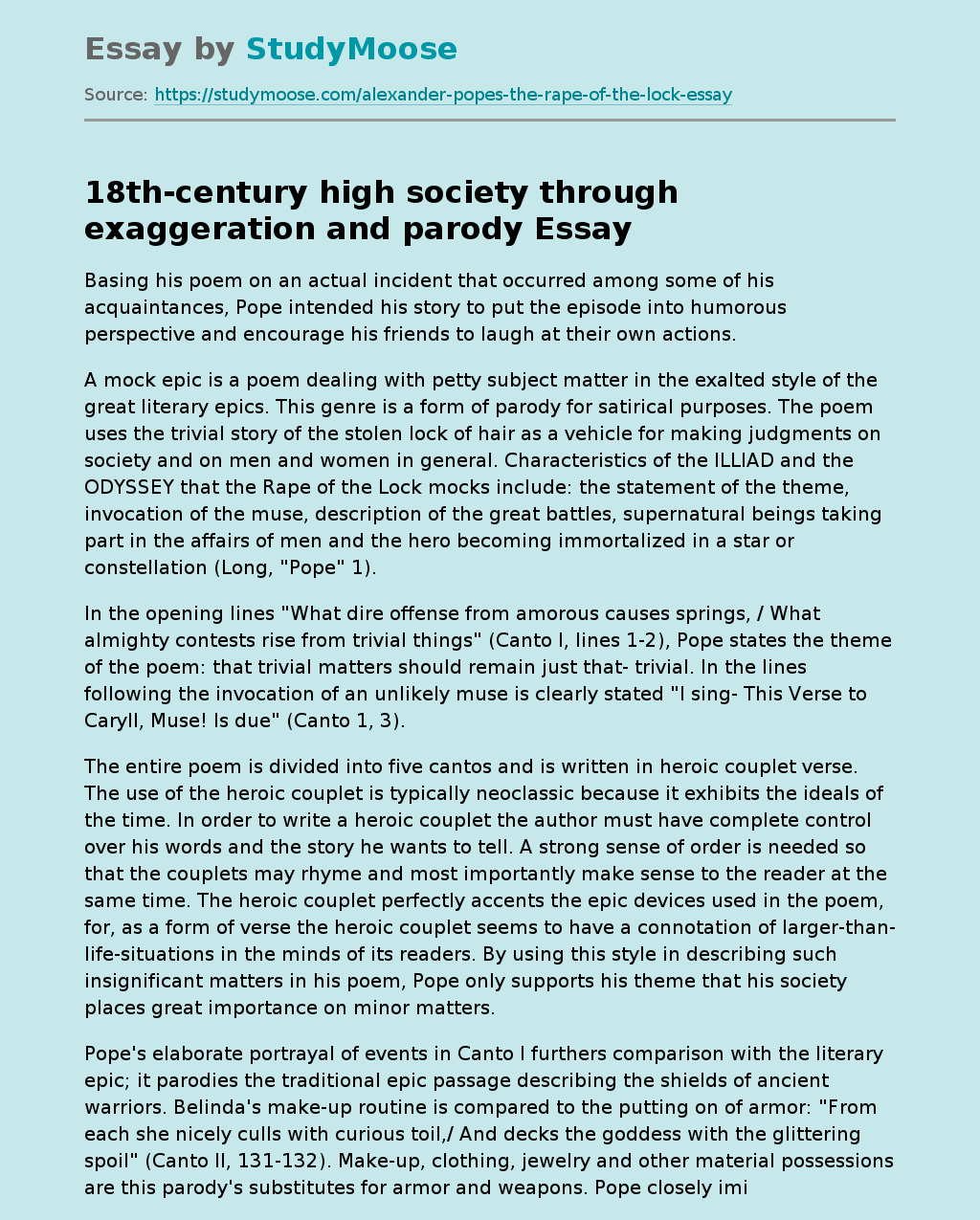