In the article “Fossil Fuels Improve the Planet” (Epstein, 2013), Alex Epstein’s main claim was that fossil fuels should be used without restriction as they provide reliable and affordable energy that improves the lives of mankind. Aiming to convince the reader fossil fuels should be freely used, he first argued that the energy provided by fossil fuels is vital to the health and well-being of mankind. He supported this by stating that processes such as purifying water, mass production of medicine and fresh food, heating and construction are vital in allowing mankind to lead healthy lives and being able to cope in harsh climates.

Don't use plagiarized sources. Get your custom essay on
“ Alex Epstein Against Future Without Fossil Fuels ”
Get custom paper
NEW! smart matching with writer

Epstein stressed that none of these things would exist in the modern world without the energy from fossil fuels. Next, he argued that alternatives like renewable energy are not effective. He asserts that renewable energy is unreliable, not cost effective and also unable to be mass-produced. He supported this by saying that even after years of investments from many countries only accounts for less than 0.

5% of the planets energy.

Finally, Epstein concluded by stating that fossil fuels are not “dirty energy”. He supported this by saying current technology can reduce waste produced in using fossil fuels to a minimum. He argued that since all processes create some waste, any process can be considered “dirty” and rejected. Epstein hence contended that mankind should focus on building better lives by reaping the benefits of using fossil fuels rather than worrying about whether processes were “dirty” or not.

Epstein supports this by listing processes such as purifying water, the mass production of medicine and fresh food, heating and construction. He states that these processes provides necessities that are key in keep sickness at bay and allowing mankind to cope with the often harsh climate, leading to what he claims to be the healthiest and cleanest living environment in human history. The evidence Epstein provides shows that the affordable reliable energy from fossil fuels provides important necessities such as clean water and medicine that is vital to the health and well-being of mankind.

This is congruent to Dennis Anderson’s points in “World Energy Assessment: Energy and the Challenge of Sustainability” (United Nations Development Programme, 2000, Chapter 11 p.394) where he reports that the presence of modern sources of energy can improve the standards of living for billions of people across the globe, especially those in developing countries who lack access to basic services and necessities similar to those described by Epstein due to consumption levels of energy being far lower than those in industrialized countries. This shows the state of people who lack access to modern energy and how their lives can be greatly improved if more energy was available to them. Therefore since Epstein’s argument uses deductive reasoning to prove that the energy provided by fossil fuels is vital to the health and well-being of mankind, since the premise is true, the conclusion of the argument is valid.

Epstein’s second argument is that alternative sources of energy to fossil fuels are not as effective. The argument uses inductive reasoning as Epstein focuses on 2 alternative sources of energy and attempts to convince the reader of his argument based on their observed limitations. The premises offered are that renewable energy such as solar and wind is unreliable, not cost effective and also unable to be mass-produced. He is able to support this with his claim that even after years of investments from many countries renewable energy only accounts for less than 0.5% of the planets energy. He also supports this by quoting examples of some richer countries that have been unsuccessful in making renewable energies usable on a larger scale even after spending large sums of money, resulting in rising youth unemployment rates as high as 50% in Spain and electrical prices doubling in the case of Germany.

These cases and facts accurately shows the limitations of renewable energies mentioned in his premises. This is supported by Professor Barry Brook in his in-depth critique on renewable energy “Renewable Limits” (Brook, 2009, TCASE 4 & 7) where he states that input for energy for solar and wind is unreliable and also shows how costly and economically unfeasible it is to make solar and wind plants reliable on a global scale. The report demonstrates this by calculating the large amounts of materials and investment needed to make each renewable energy source reliable on a global scale e.g. 1,250,000 tonnes of concrete and 335,000 tonnes of steel per day from 2010 to 2050 for wind power to be reliable. Therefore, the facts in the premises Epstein offers are true. However, he chooses to purely focus on solar and wind as alternatives to fossil fuels and not on other more promising alternative sources of energy such as hydroelectric power or nuclear. Although he mentions them in his argument, acknowledging them as able to provide more significant and reliable power compared to solar and wind, Epstein fails to go any further in depth than that.

The World Energy Outlook 2012 (International Energy Agency, 2012) showed that renewable energy is likely to grow to become the second-largest energy source by 2015, with its share of global power generation rising from 20% in 2010 to 31% by 2035 mostly stemming from hydroelectric power and nuclear power. Although the report states that this depends on continued subsidies, subsidies for renewable energy are also projected to reach $240 billion per year in 2035 from $44 billion in 2010, for 31% of global power. The report suggests that given enough time renewables like hydroelectric power and nuclear could be produced on a wide enough scale to compete with fossil fuels. This shows that the other alternatives not evaluated fully by Epstein are definitely gaining traction and support around the world and are able to produce affordable and reliable energy as well, potentially on a global scale given time. Although he claims to have focused only on solar and wind as environmentalists, opponents of fossil fuels, often only champion solar and wind power over nuclear and hydroelectric power, it is a very weak reason to not go into detail about these alternatives that are clearly gaining much traction and support around the world as shown in the source.

Hence, Epstein fails to consider the full scope of alternatives in his argument and seems to focus only on alternatives that have clear limitations to strengthen his argument. Since his argument uses inductive reasoning to prove that alternative sources of energy to fossil fuels are not effective, based on the premises provided not painting a complete picture of the issue at hand, and the fact that the alternatives ignored show more promise than the ones mentioned in the premises, his argument is weak and not convincing. 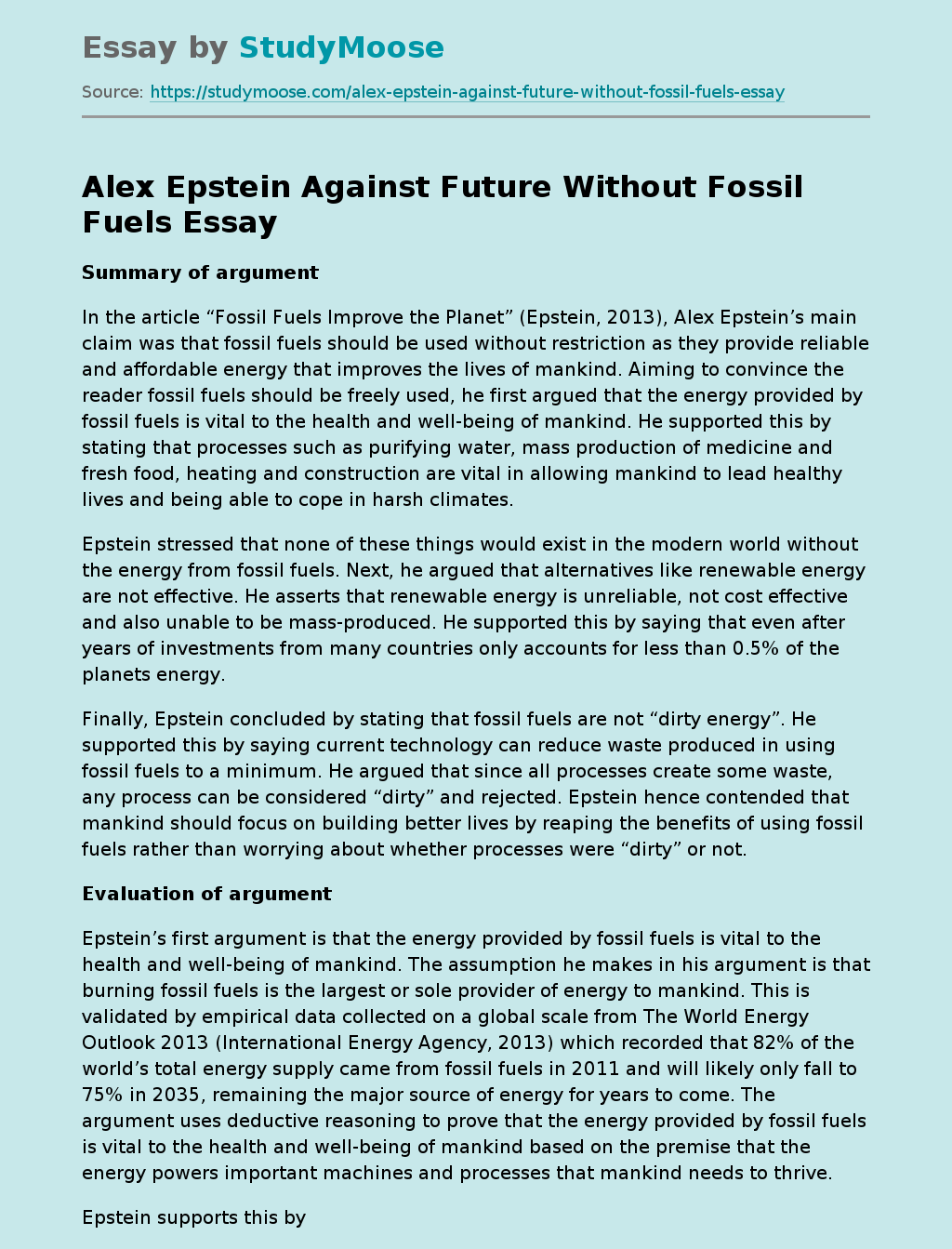