2. How did music differ before and after Bach?

Almost everyone in the piano-playing world would agree that his compositions are light-years ahead of his time, harmonically speaking. He introduced unexpected chord changes of which some were considered blasphemous because it was written for a formal choir.

Don't use plagiarized sources.
Get Your Custom Essay on ﻿Alejandro Quiroz Just from $13,9/Page

4. What is a Baroque spirit when playing music?

Baroque spirit expresses enthusiasm.
5. At the bottom of the page that discusses Baroque music performance, there are some examples of music that you can listen to. These examples often use different instruments than we are used to hearing today. What are some of these instruments? How is the sound of the music different than what we might hear today? They use instruments such as harpsichords, lots of violins, and clavichord. People today still sometimes use violins but the beats and instruments sound very different then what we hear today.

6. Who was Arcangelo Corelli? What are some of his contributions to classical music? Corelli was an Italian violinist and composer, Corelli initially he started studying music under a priest in the nearby town of Faenza, and then in Lugo. The style of execution was introduced by Corelli, which is important for violin playing. As the time passed Corelli became a “iconic point of reference” for other violinist.

7. Who was Gottfried Silbermann?
Silbermann and Bach were contemporaries and both of them worked together as colleagues and friends, both of them shared an interest and advanced knowledge of acoustics as applied to the voicing and location of organs. In their later years they would work again on the escapement mechanism for first fortepianos, Silbermann would receive the title of honorary court and state organ builder to the king of Poland and the duke of Saxony at Dresden, probably the most famous aspect of Silbermann’s instruments is their distinctive sound.

8. After listening to some of the music samples, how would you describe Baroque music to someone who had not heard it before? Choose at least one piece of music to discuss in detail. What instruments do you think the work uses? Who composed the work? What does the work sound like? 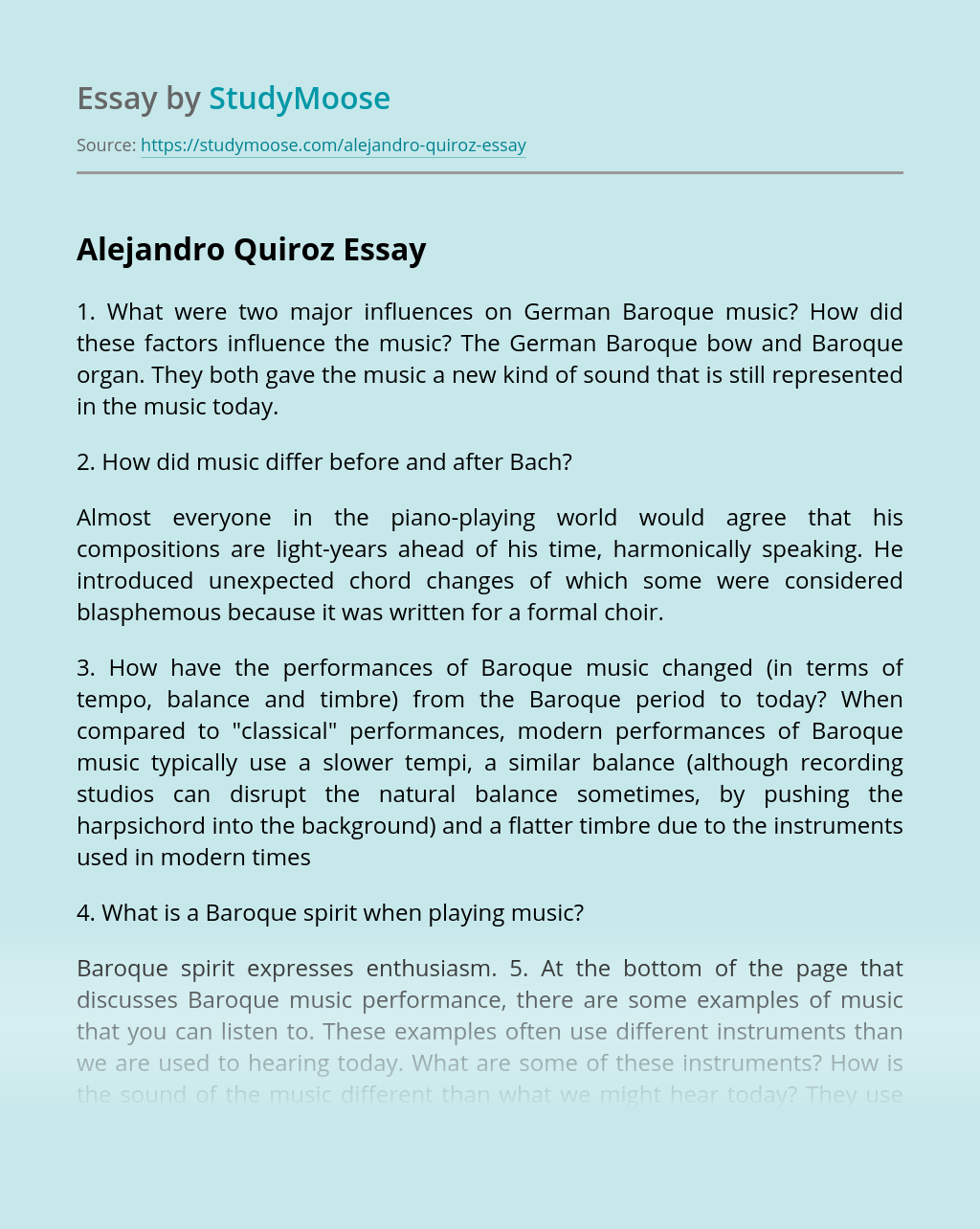 The Evolution of the Concerto from Classical to Romantic Era

Rate this post The concerto form was developed significantly from the Classical to the romantic era; producing changes within its instrumentation, form thematic material and rhythmic devices. The societal attitudes towards the composition and consumption of the concerto form also changed during this time. A concerto is an arrangement with solo works performed within the...

Rate this post The Baroque period of art was from the 1600’s to the 1700’s. This period in art history began with the Catholic Church launching an internal reformation to establish clear definitions of the church’s theologies, as well as their doctrines. A sector of the church’s reform was to educate the members. One way...

Rate this post It’s hard to make a distinction in which the beginning of the Baroque period is clearly distinguished from that of the late Renaissance. Nonetheless, Baroque art is emotional, decorative and a direct result of the Counter-Reformation movement in Europe. During the Baroque period, there was a dramatic religious split in the Church...

Rate this post When many people listen to music from earlier periods, they classify it all as classical music, when although there were many periods of music. Although the two may sound similar to the untrained ear, the Baroque style and the Classical styles of music have many differences. The Baroque Period (1600-1750) was a...