“hi everybody, welcome to the wednesday meeting, yep yep. um everybody give it up for eli, first of all, who’s been offthe meth for a whole month now, and his wife’s getting outof jail next thursday, is that right? anyway we’ve got a new speakertoday so big round of applause for this young man here.

“it’s been about a week nowI’m startin’ to get weak nowI wake up at 11:30 that’s when I start getting thirsty andI don’t know what it isall I know there’s a bottle in the fridgewith my name on itif I want it’cause I’m an alcoholic and I knowyeah hi my name is Tom I’m an addictcan’t really remember just how long I been at itI’m guessin that this happened like a pattern and a problemcause my father’s a fiend andso was mum so its somethin’ like part of my genesbut it’s hard to get clean but its hard to sustainbut at the end of it I really can only answer to meand it’s the way it is I truly learned thatso don’t give me all that.

“Channeling the universe” crapthats a load of s**t I ain’t tryna’ to pass the blamelike it’s just a part of fateand I ain’t got a part to playcause if that’s the case then I really can’t escapemight as well just start the day with a glass of chardonnaylike my dad does thinking that time can never catch usfollowing my nose kinda like my bro.

Haz doesbut I’m scared I’ll end up in a home like daz wasthat dude went mad once,but na f**k that buzzI’m looking for a little morebut s**t is rawcause its just a little short walk to the liquor store,a little more to middlemoremy mind keeps saying “this is what I’m living for” but my liver isn’t sureit’s 6 In the mornin’ we’re about to close the clubbut we know the owner so we’re there until they open upand that’s why I’m broke as f**k bank account Golden Duckblowing bucks on these drugs going nuts tryna’ sober upI woke up Friday morninglying on the floor in a one man cellhe said I punched that C**Tstablehow many lies can one man telland now I’m on probationI’m getting rehabilitationasking for some explanation.

I said”I just like getting wasted”so don’t ask why I’m stonedand look lady I don’t knowsign my forms so I can go’cause I got court at 9 tomorrowand if the judge is a b***h I could even jump of a bridgeor go get on it’cause I’m an alcoholic and I knowI f****n’ hate this placef****n’ hate this place more than f****n’ ace of bassf**k what this lady says I bet she’s smoked moresmack than I’ve ever drunk beerand then she asks me if I been high this week; “f**k yeah! “I’ve been high like a pilotwhy try to deny I wont lie iv been wiredpopping E like vitamin cyou wanna read my mind like a psychicyou really wanna know why.

I get high”cause I like it”does it really take a f****n’ Einstein to figure that outhow much more s**t can you spit out your fat mouthwho would have known you’d get addicted to crackWOWwhat a f****n’ breakthrough everybody clap nowjust give it up for jack for giving up the crackit’s been a whole week since he had a huff and snaprolled his dead ex-wife in some bubble wrapfilled a duffel bag with all her husband’s stuff and gapped, yeahit’s been a month and they got nothing backjust a lecture from some alchie and a drunken cattryna’ to tell me how to me live my lifebro cut the crapSobriety?

what the f**k is that? Cant even spell it broi f****n hate this place like the f****n’ ellen showstraight upi f****n hate this place like f****n baby face,and eric claptonnah f**k this s**t i aint even finished this s**t,ya knowi wont go and get stoned with some hippie b***h with ankle bracelets English Assignment 91106 Text type: Song lyrics Title:

Alcoholic – Homebrew This song really helped to picture the life of a man stuggling with alcoholism/being an alcoholic. The song explains how he ended up as an alcoholic, his struggles with day to day life trying to become sober, and the consequences of not being sober and giving into the temptation of alcohol.

The writer blames his parents for the way that he has acted around alcohol, “ I’m guessin that this happened like a pattern and a problem cause my father’s a fiend and so was mum so its somethin’ like part of my genes” and “ might as well just start the day with a glass of chardonnay like my dad does thinking that time can never catch us”, the writer believes that his genetics caused him to be an alcoholic, but also that his fathers habit of drinking chardonnay first thing in the morning has led him to believe it is normal.

I think it is very logical for the writer to blame his parents for this, especially the fathers bad habit of drinking chardonnay in the morning, as children are meant to learn from their parents, this is what the writer has learnt from his father.

This is all relevant to families all over the world, as in every culture children are influenced by their parents actions, and if their parents are heavy drinkers then it’s normal for their children to believe that large quanties of alcohol consumption is normal which in many cases leads to alcoholism.

The writer continues to write about the struggles of trying to be sober “ it’s been about a week now I’m startin’ to get weak now I wake up at 11:30 that’s when I start getting thirsty”, after only a week of being without alcohol, life is getting unbearable and he is starting to feel week, getting the urges to consume alcohol as soon as he wakes up in the late morning.

“all I know there’s a bottle in the fridge with my name on it if I want it” and “but it’s hard to get clean but its hard to sustain” – the writer finds it hard to continue being sober when he knows that there will always be a bottle of alcohol somewhere to turn to, if he decides he wants it. I really do feel for the writer, as he has a serious problem, and is clearly struggling with day to day life trying to stay sober.

The constant repitition of the line “’cause I’m an alcoholic and I know it” is the writer trying to justify his actions, which is common for alcoholics to do. I do sympathise and unstand the writer, as alcoholism is a disease, yet I believe he gives up too easy and gets himself into un-needed trouble which relates to the youth in New Zealand.

The youth in New Zealand begin drinking alcohol at an early age, which is some cases leads to alcoholism causing many teenagers and young adults to get into trouble with the law as the writer soon explains as he finally gives into the urges of drinking alcohol “ I woke up Friday morning lying on the floor in a one man cell” & “ and now I’m on probation, I’m getting rehabilitation”.

This is explaining the consequences of heavy drinking, which is a common thing in New Zealand and many other countries. Heavy drinking can lead to serious consequences such as ending up in jail, on probation and rehab as the writer has mentioned. I feel like this song explains the stuggles of alcoholism, which is a huge problem in many countries and needs to be taken more seriously. Alcoholism is a disease and needs to be treated like one so that sufferers of the disease get the help they need to stop them from getting into trouble. 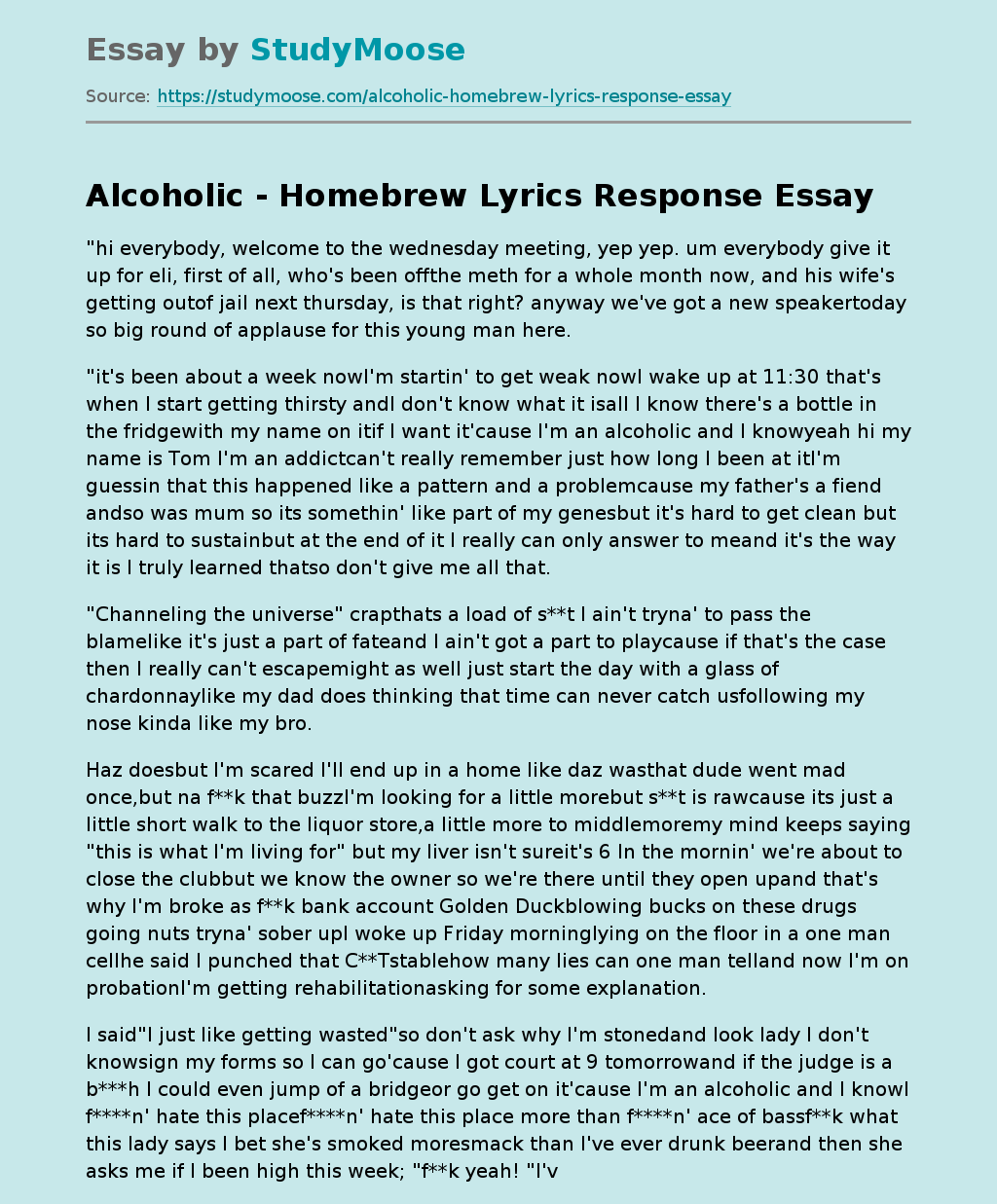