Alcohol and marijuana are two drugs commonly used and abused in the United States. Alcohol is the number one abused drug, while marijuana is number one among illegal drugs. While alcohol remains legal, and marijuana illegal, this does not necessarily mean that alcohol is better for you. There have been many arguments where people suggest that marijuana should be legal because alcohol is more deadly. On the other hand, there are alcoholics who would tell a pothead that smoking weed is bad for you.

Don't use plagiarized sources. Get your custom essay on
“ Alcohol vs Marijuana ”
Get custom paper
NEW! smart matching with writer

Both substances are very bad for your health and should not be heavily used by anyone but we do need to be a little more piteous to the people that do drugs because you don’t know what they go through in life . Although, Marijuana has such a bad reputation Marijuana is one of the most common drug today and its also arrant. But what exactly is marijuana? Marijuana is a green, brown, or gray mixture of dried, shredded leaves, stems, seed, and flowers of the hemp plants.

There are a lot of names for this drug and they are: pot, herb, weed, grass, boom, mary jane, gangster, or chronic. See more samples of argumentative essays.

others may think its cool to use marijuana because they hear songs about it and see it on TV and in movies. Some teens may feel they need marijuana and other drugs to help them escape from their problems at home, at school, or with friends.

Alcohol is a drug that is classified as a central nervous system depressant. There are three forms of alcohol, beer, wine and distilled spirits. Alcohol is one of the most commonly used drugs in the United States and has more adverse effects that most other drugs combined. There are many aspects to consider when thinking about alcohol as a drug. There are many myths surrounding alcohol, including who uses it, what its effects are on users, social and sexual situations and the amounts people drink. The vast majority of the American population uses alcohol and in many various ways and this also causes different effects.

If they were to get rid of marijuana and alcohol I think that would be very formidable. As you can see marijuana and alcohol are the most common drugs used in today’s society but does that make it right for everyone to do them? Should alcohol be illegal since marijuana is illegal or should they both be legal? Those are some of the questions you have to ask yourself because just because your friends are drinking and smoking doesn’t mean you have to drink and smoke also, jus be above the influence! 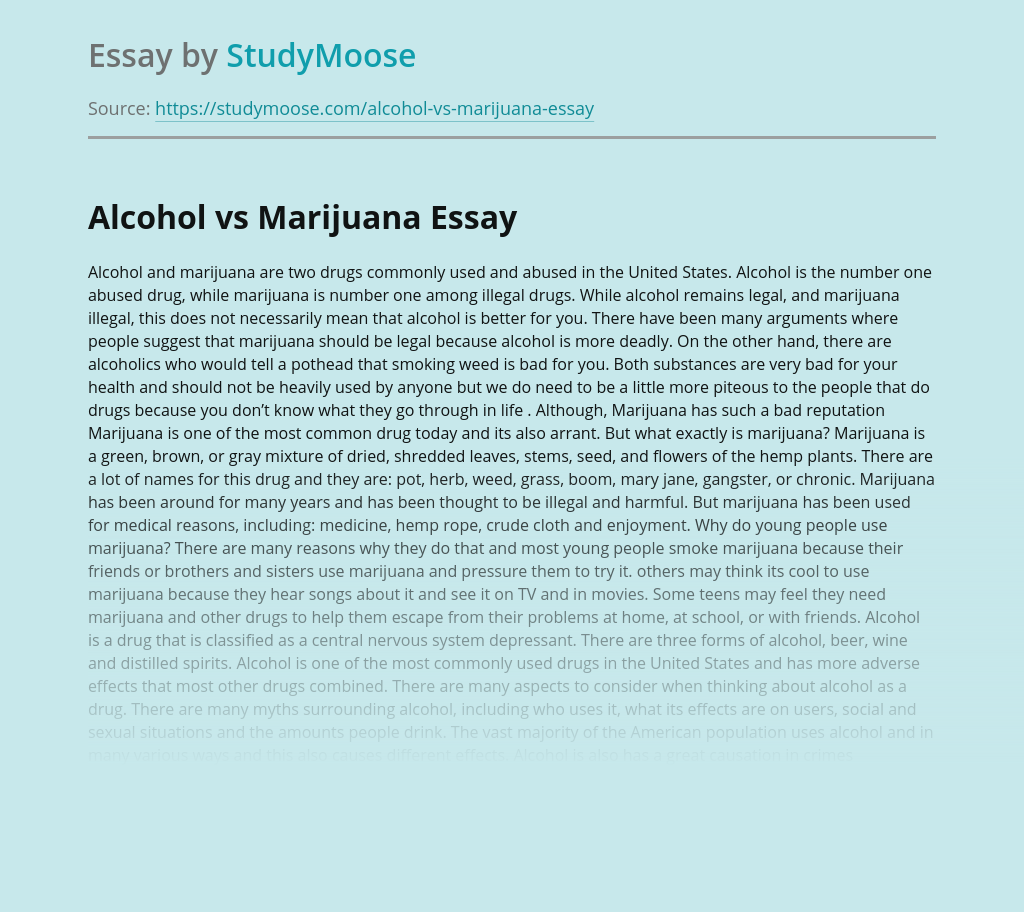