Alcohol-related motor vehicle accidents are the number one cause of death and disability among teens. Alcohol is also linked with deaths by drowning, fire, suicide, and homicide. Even if you are not drinking, but are around people who are, you have an increased risk of being seriously injured, involved in a vehicle crash, and affected by violence. If you are under 21, it is illegal to buy, possess, or consume alcohol. Teens who drink alcohol are more likely to be victims or perpetrators of violent crimes such as rape, aggravated assault, and robbery.

Teens who use alcohol are more likely to become sexually active at earlier ages, to engage in sexual activity more often, and to engage in unprotected sexual activirt more often than teens who do not use alcohol. Alcohol abuse—the excessive use of alcohol. It is estimated 25 percent of all youth are exposed to alcohol abuse at some time before they reach the age of 18. Young people who live in a household in which a family member abuses alcohol are at a high risk for neglect, abuse, economic hardship, and social isolation.

Most schools have adopted a zero-tolerance policy for students found using alcohol.

* Being Alcohol Free Maintain a healthy body Make responsible decisions Avoid risky behavior Avoid illegal activities Lesson 2: Harmful Effects of Alcohol Use * Short-Term Effects of Drinking Body size and gender. Food. Amount and rate of intake. A small person feels the effect of the same amount of alcohol faster than a large person does. Alcohol moves in the bloodstream faster in females.

Food in the stomach slows down the passage of alcohol into the bloodstream. When a person drinks alcohol faster than the liver can break it down, intoxication results.

When blood alcohol levels become too high, alcohol poisoning can occur. * Alcohol and Drug Interactions Interactions between medications and alcohol can lead to illness, injury, and even death. Alcohol-drug interactions are a factor in about one-fourth of all emergency room admissions. Metabolism- the process by which the body breaks down substances. Alcohol travels through the blood-stream to the brain. The presence of bother alcohol and medication or another drug with a person’s body can be very dangerous. Multiplier effect- in which the medication has a greater or different effect than if it were taken alone.

Alcohol-Drug Interactions: * Alcohol may slow down a drug’s absorption by the body. * Frequent drinking may increase the number of metabolizing enzymes in the body causing the medication to be broken down faster, decreasing their effectiveness. * Metabolizing enzymes can change some medications into chemicals that can damage the liver or other organs. * Alcohol can increase the effects of some drugs. * Driving Under the Influence Driving while intoxicated is the leading cause of death among teens. Blood alcohol concentration (BAC)- the amount of alcohol in a person’s blood, expressed as a percentage.

-slows reflexes. -reduces a person’s ability to judge distances and speeds -increases risk-taking behaviors -reduces a person’s concentration while increasing forgetfulness. Consequences of DWI: Harm to the driver and others Severely restricted driving privileges and/or immediate confiscation of a driver’s license. Alcohol –related injuries, property damage, and death Living with the regret and remorse from these consequences. Loss of parental trust and respect. Arrest , Jail time, court appearance, and heavy fine or bail. A police record and possible lawsuits.

High insurance rate. Binge drinking- drinking five or more alcoholic drinks at one sitting. * Alcohol Poisoning Alcohol poisoning- a severe and potentially fatal physical reaction to an alcohol overdose. Alcohol acts as a depressant and shuts down involuntary actions such as breathing and the gag reflex that prevents choking. It’s common for a person who has consumed too much alcohol to vomit because alcohol is a stomach irritant. Effects of Alcohol Poisoning: -Mental Confusion, stupor, coma, inability to be roused, vomiting, and seizures.

-Slow respiration -Irregular heartbeat -Hypothermia -Severe dehydration from vomiting. Lesson 3: Alcohol, The Individual, and Society * Long-Term Effects of Alcohol on the Body Changes to the Brain Cardiovascular Changes Liver Problems Digestive System Problems Pancreas Problems * Alcohol During Pregnancy Alcohol passes from the mother’s body into the bloodstream of the fetus. A female who drinks during pregnancy risks permanent damage to the fetus. Fetal alcohol syndrome- a group of alcohol-related birth defects that include physical and mental problems.

The effects of fetal alcohol syndrome are both severe and lasting. An FAS baby may be born with a small head and deformities of the face, hands, or feet. Heart, liver, and kidney defects, as well as vision and hearing problems, are common. FAS babies experience slow growth and coordination and have difficulties with learning, attention, memory, and problem solving. * Alcoholism Alcoholism- a disease in which a person has a physical or psychological dependence on drinks that contain alcohol Alcoholic- an addict who is dependent on alcohol. An alcoholic might display three symptoms:

Craving, Loss of control, Physical dependence, Tolerance, Heath, family, and legal problems. Stages of Alcoholism: 1. Abuse 2. Dependence. 3. Addiction. * Effects on Family and Society Alcohol is a major factor in the four leading causes of accidental death. Alcohol also plays a major role in violent crimes, such as homicide, forcible rape, and robbery. About 40 percent of violent crimes, totaling about 3 million annually, are alcohol- related. Two- thirds of victims who encounter domestic violence report that alcohol was a factor in the crime.

Nearly half of all homicide victims have alcohol in their bloodstreams. Codependents learn to ignore their own needs and focus their energy and emotions on the need of the alcoholic. Recovery- the process of learning to live an alcohol- free life. Sobriety- living without alcohol. Where to get help for Alcohol Abuse 1. Al-Anon/Alateen 2. Alcoholics Anonymous 3. National Association for Children of Alcoholics. 4. National Clearinghouse for Alcohol and Drug Information 5. National Drug and Treatment Referral Routing Service. 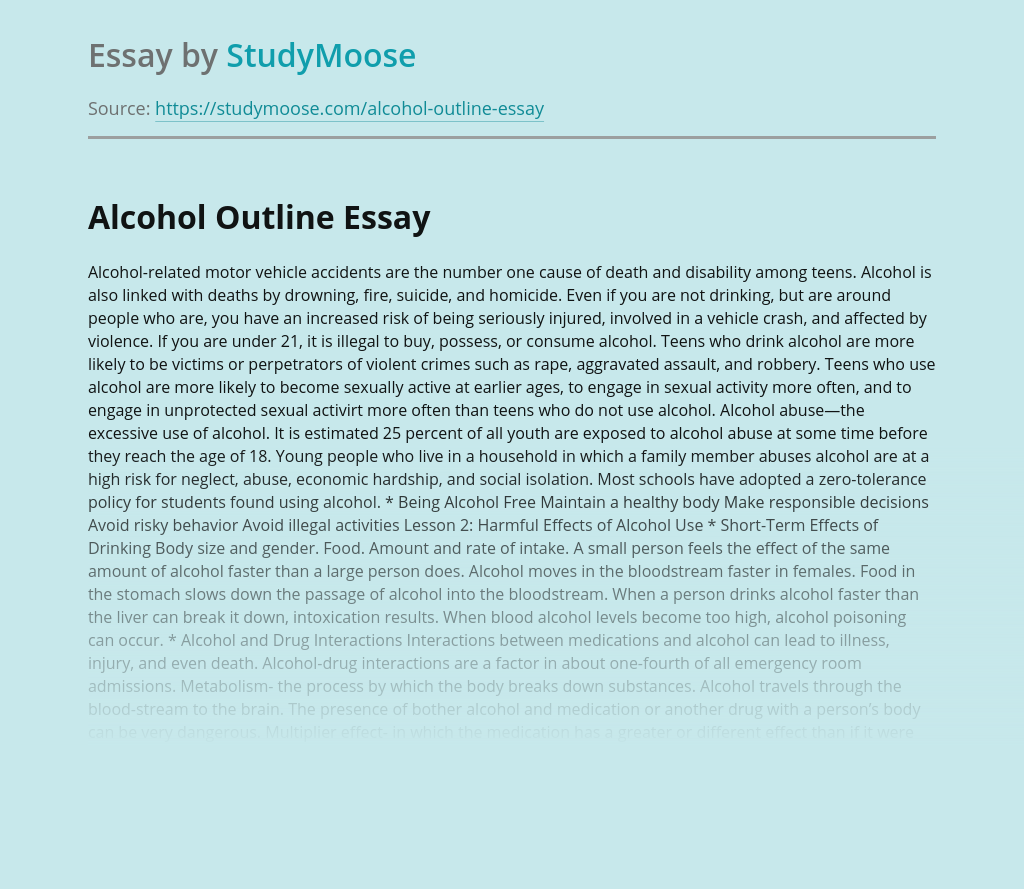