The above chart shows us the alcohol consumption by different countries. Obviously, Australia has drunk alcohol above 12. 5 per capita (liters) and this represents a large consumption population. Drinking alcohol is considered a normative behavior in adolescence, with adolescent drinkers the majority of consumers for some beverages. The often sweet taste of RTD sub-category, combined with attractive packaging, has led critics to charge that the drinks are appealing to underage youth—as well as young drinkers of a legal age who may be prone to consume them in excess.

Don't use plagiarized sources. Get your custom essay on
“ Alcohol Beverage Pest ”
Get custom paper
NEW! smart matching with writer

However, in an effort to minimize under? age binge drinking he Federal government substantially increased the excise tax by 70% on RTD’s in April 2008. This price increase has lead to a significant decline in the sales revenue of the RTD sub? category as a whole, and this decline is underpinned by the departure of the highly profitable 18? 30 year old ‘aspirational drinker’ adult market segment. So, we need to think out new strategy to get the losing market back.

The alcoholic beverage industry faces political challenges. Specifically, in international markets, we should consider like civil conflict, governmental changes and restrictions concerning the ability to relocate capital. The hot political debate in 2010 revolved around the privatization of alcoholic beverage sales. Every state has a department that sets and enforces the regulations concerning the sale of wine, beer and spirits. Companies, who fail to meet the standards of law, are fined by the local government.

Furthermore, we should be able to penetrate emerging and developing markets, that also relies on economic and political conditions, and also their ability to form effectively strategic business alliances with local bottlers, and to enhance their production amenities, distribution networks, sales equipment, and technology Economics: The economic recession that started in late 2007 had a little profound impact on the alcohol beverage industry.

This is due to the reason that during the mid? 2000’s, the RTD sub?category was the fastest growing segment in the total alcoholic beverage market (sales increased from 70 million liters to over 390 million liters per year over the 1997 to 2006 period) and the age of consumer range around 20s. So, in an effort to minimize under? age binge drinking he Federal government substantially increased the excise tax by 70% on RTD’s in April 2008. This price increase has lead to a significant decline in the sales revenue of the RTD sub? category as a whole. Because demand for alcohol is price inelastic – a 10% increase in price will reduce consumption by around 5%. Social:

Alcoholic beverages are often an important part of social events in Australia culture. Therefore, we are surrounded by the acceptance and encouragement of alcohol, such as by restaurant, television. People usually drink with friends in a party. Drinking alcohol make them feel happy. According to the research, one drink with a friend can lessen nervousness and tension—as long as the person drinking doesn’t consume more than he should. It can also let people forget the problems. Technology: We have moved towards to the 21st century and everything has changed greatly, especially for the technology.

For example, Some company have developed a technology to provide an environment in which yeast can be activated more efficiently in the fermentation process for a new genre of no-malt beer. Alcohol beverages made with this process taste crisper thanks to high-level fermentation. Besides, Australia’s liquor industry funded organization, DrinkWise Australia, in partnership with alcohol producers, will unveil a national voluntary campaign to put health warning label on majority of alcoholic beverage products in an endeavor to prevent excessive drinking in the country.

A majority of alcoholic drinks, such as beer, wine and spirits, will also sport the warning labels, targeted especially at pregnant women and teens, according to Trish Worth, chair of DrinkWise Australia. Another thing presents techonology advance is that the entrance of cans in the past. This has increased sales volume for the alcohol company because they are easier to carry and customers can bin them once they have been used. Ethical and regulatory considerations (product & advertising) • Advertising regulation

Exposure to alcohol advertising and product packaging is associated with increased intentions to drink and is predictive of early onset of alcohol consumption (Grube and Wallack, 1994; Garfield et al. , 2003; Ellickson, Collins, et al. , 2005). Although alcoholic beverages are allegedly not marketed towards under-age drinkers, teenage exposure to Australian alcohol advertising has been described as ‘significant and increasing’ (Carroll and Cramer, 1996; Casswell, 2004).

Longitudinal study of 10–17 year olds (n = 500) it was found that liking a particular beer brand before reaching the age of 18 years contributed to the likelihood of being a heavy drinker (Wyllie et al. , 1998). In 2002, the Australian alcohol industry spent 1. 9 billion dollars on such advertisements (the majority of which placed on television) (Centre on Alcohol Marketing and Youth, 2004). But the government has good control of the advertising exposure to the television, which in order not to affect children.

Besides, it requires that adults should supervise children when products or activities could be risky. • Product regulation Some alcohol beverage such as RTDs often have a sweet taste, especially when combined with high alcohol contents (8 – 12%), making it easy for young people to drink alcohol and over-indulge. Also, brightly colored RTDs, packaging and promotions can be particularly appealing to children and young people. Energy drinks combined with alcohol can increase the length of time people drink as it combats the drowsiness usually associated with intoxication.

Marketing and promoting RTDs activity falls under strict and well-established codes for responsible marketing worldwide. For instance, RTDs manufacturer has a voluntary Code of Responsible Practices for Beverage Alcohol Advertising and Marketing. The Beer Institute and The Wine Institute in the Australia also have their own codes of responsibility. The relevant agency (such as Spirit Association) also set up Code of Practice (underlying principles) for Naming, Packaging, and Promotion of Alcoholic Drinks.

Such as: • That ads should not feature children, cartoon figures, or anything that appeals primarily to persons below the legal drinking age; • That there should be no suggestion that alcohol use represents a “rite of passage” to adulthood; • That there should be no suggestion that drinking alcohol is a means to attain success; • That ads should not depict situations in which beverage alcohol is consumed excessively or irresponsibly; • That there should be prominent responsibility statements in all advertising initiatives; and • That we will place advertisements in media where at least 70 percent of the audience is of legal drinking age or older. 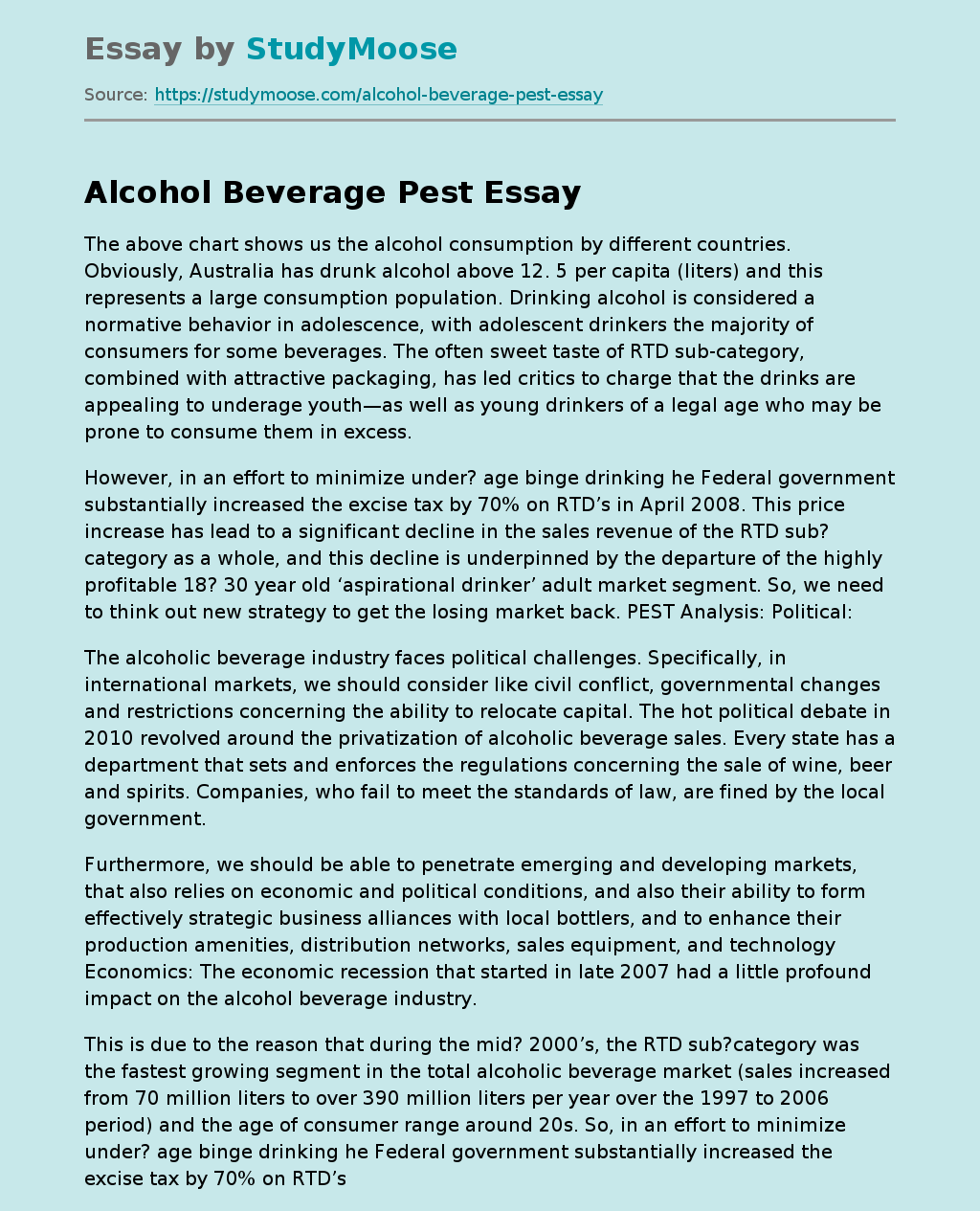