Visual Persuasion: The Role of Images in Advertising

Advertising is part of our daily lives as advertisers use numerous ways to attract the customer’s attention. Advertising can be referred to as non-personal communication on a corporation or its products that are broadcasted to viewers through a mass medium. All efforts to inform and convince must respect the principles of human freedom for them to be right. Highest ethics should be practiced when advertising to children. Advertisers should shape their subject to attract audiences of the scope and demographic structure sought.

Don't use plagiarized sources. Get your custom essay on
“ Visual Persuasion: The Role of Images in Advertising ”
Get custom paper
NEW! smart matching with writer

Advertisers should practice transparency. There should be the need for proper conduct and rapport with consumers ought to be honest and fair. . All advertisements normally use rhetoric images as well as visual effects that make these products appealing to consumers. The question is, what is the purpose for the advertisements and what makes a consumer to see the images and want to try the alcoholic product.

Advertisements are normally done on TV, magazines and the radios hence are accessible to the target market in this case of whiskey advertisement the young adults.

The advertisement industry has grown rapidly in the past years as effective advertisements has led to increase in sales for companies, hence the need for companies to study all means that an advertisement can attract the attention of the potential buyer of any product. One of the most common ways of advertising in alcohol products but controversial is the use of sex to sell alcoholic products (Carstarphen et al, 114). To analyze the advertisement of Evan Williams’ whiskey, a rhetorical triangle is used.

Also included are ethos, pathos as well as logos. The target audience for this advertisement was young males and females in their late teens, mid and late twenties.

The advertiser uses pathos in the advertisement by evoking emotional feelings especially from the men.To get the male side of the equation, the advertiser draws attention as well as interest, by the use of a striking, attractive young lady on the right side of the advertisement, in bright colors to draw attention to a bottle of whiskey that is right in the center of the page. The thing that makes the attention of people to stick is that the attractive young lady is in fact posing next to nothing despite being incredibly good looking. There is also a way to get female attention to the advertisement. This is done through showing a plain girl, seeming a typical girl during the younger years. Besides that, there is an image of the same little girl but now she has become a woman, very attractive, more powerful, and full of confidence and self-esteem. Then the only way to achieve that is by drinking Evan Williams Kentucky straight bourbon whiskey. (Williams)

The advertiser uses sexual stereotypes that include a blonde hair, with blue eyes as well as breasts that are large in size. The whole thing leads to the impression that sex sells (Carstarphen et al, 114). This is the advertiser appealing to the ethos. Also cannot see the trustworthiness of this advert writer and most likely there is a snobby attitude as it seems that the only way that people care about others is if they are good looking and the less attractive are viewed unequal. This fails to comply with the ethos such that it is not ethically right. It is also difficult for the woman who is less attractive on the right side of the advertisement to achieve similar opportunities than the one who appears sexually enticing to the audience. I believe that the advertisement is showing poor ethics hence failing to comply with the industry ethos.

Logically the advertisement is essentially sexual. There is the use of a scantily clad lady, who looks so attractive in bright colors, standing just next to a bottle of whiskey. The advertiser also tries to use a slogan that will go with the product as well as its application in a completely different situation including a woman. They also show how better it gets when aged seven years. It is degrading to the woman who appears in the advertisement since it shows her being ugly in the first image, and then again in another shot, she appears years later with less clothing and make up done, suggesting that she now looks better. The problem with it is that only few women look like that hence setting the bar too high to reach for ordinary people. I would also mention that there is nothing wrong with girl on the left as she is plain and simple. The collective responsibility of the society is drained away through wearing close to nothing in order to catch attention as well as impress. The photo on the left looks worse because they have not done the hair. The lady also wears a shirt that’s wrinkled, simple earnings as well as a simplistic vest.

The target audience of this campaign is the general public more specifically, home. The effectiveness in the delivery of the advertisement is quite successful. To me, the delivery of the advertisement is easy to relate to and because of that. I could be easily convinced do consume the product. The effective delivery of the advertisement makes its more appealing to the target audience hence helps in the achievement of their desired marketing goals.There is the impression that drinking this product will make the person to get this particular woman. There is the attraction on the female emotional side whereby there is the talk of how a young decent looking woman goes on to become attractive, the impression created here being that this product makes women become very attractive. This is appealing to consumer ethos. In the advert, the younger girl who looks less attractive seems to be less confident but in the older picture she looks more attractive. In the newer picture, she looks more vibrant and her clothing is more sexually proactive than in her older self, where she used to cover up and dint show any skin. Therefore the advert shows that a person becomes happier if they are good looking and sexually dressed unlike when they are not good looking persons

In conclusion, I think the use of sexual appeal is a terrible way of advertising. The problem is that all companies have adopted this way of advertising and this has led to consumption of alcohol even for the under aged. I have also noticed that the different angles of this advertisement are similar as sex is used to sell everything. The society also seems to have adapted to this type of advertisement and therefore no changes will occur any time soon hence sexually racy ads will continue to be seen in the magazines (Sell now, 89). Hopefully companies will one day do away with these types of ads and make ads that are suitable to our culture.

Visual Persuasion: The Role of Images in Advertising. (2015, Dec 26). Retrieved from https://studymoose.com/alcohol-advertising-essay 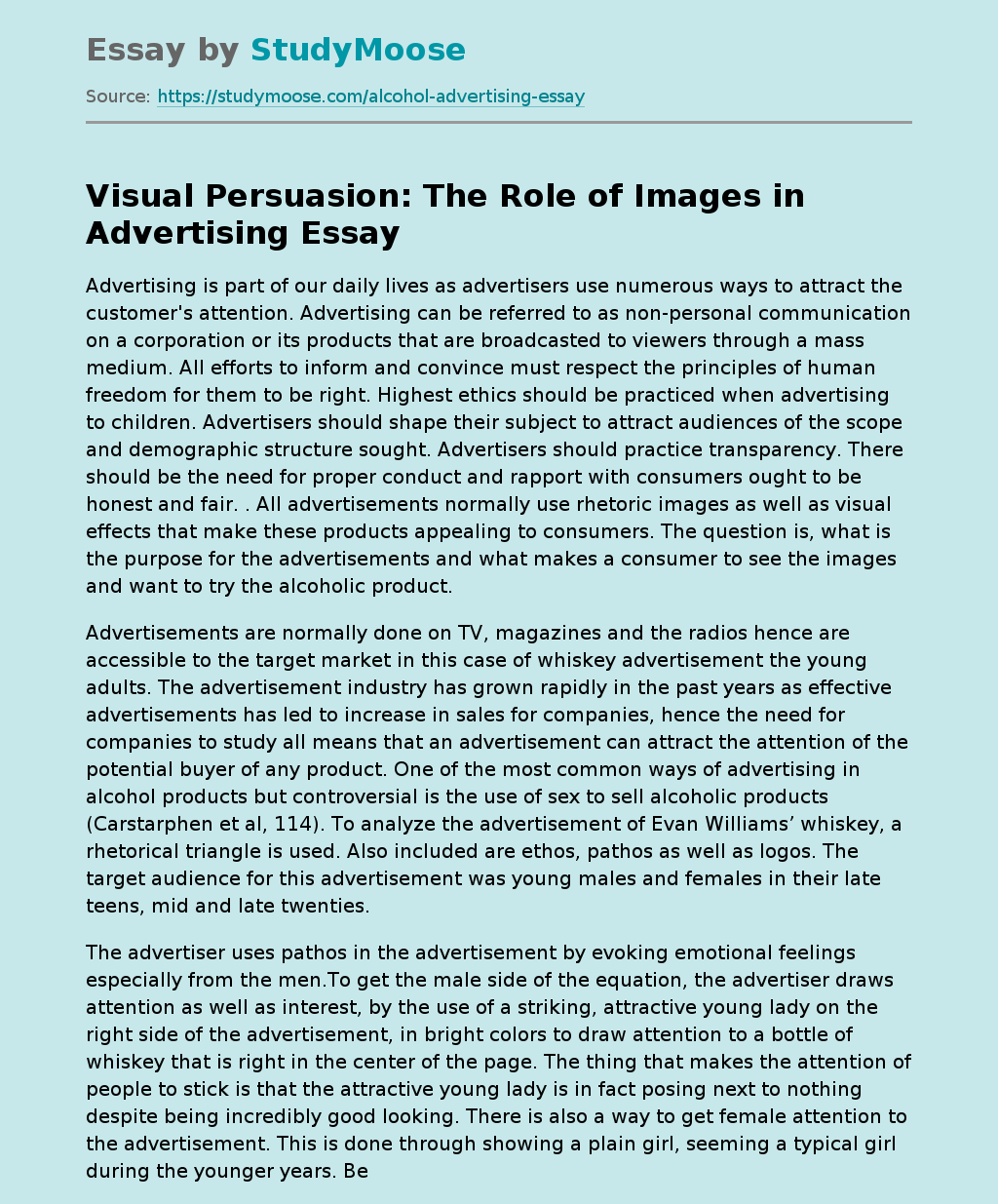