Albert Einstein As A Noble Prize

This essay will discuss about Albert Einstein’s inventions, achievements and the Nobel Prize. Moreover, it will discuss about his mistakes in his life. Albert Einstein is the 20th century’s greatest scientist. He contributed immensely to the world of science and more specifically in physics where he developed the energy law of relativity; E=mc2 and later won the noble peace prize. He advocated for the use of non-militant means to achieve peace and this later led to the formation of the Albert Einstein’s Peace Prize which is awarded yearly.

Don't use plagiarized sources. Get your custom essay on
“ Albert Einstein As A Noble Prize ”
Get custom paper
NEW! smart matching with writer

This was influenced by his belief that that people have got to start to think in new ways of preventing military contests whose results are a disaster to all concerned parties. In the field of physics, he made quite a number of inventions including the theory of relativity which states that there is relativity between masses and energy. He drew from this theory to develop atomic energy. He was a genius in this field (Schweber, 2008, PP.

39-57). These two factors-his inventions in physics and his advocacy for peace-made him so famous.

Even to date, people talk about Einstein as if he were still alive. He developed on his invention of the energy formula E=mc2 from the theory of relativity to develop atomic energy (Moltz, 2008, P. 219). He later combined this formula with the quantum theory to further advance the concept of atomic energy which led to the development of the atomic bomb. Albert Einstein the theoretical physicist developed the atomic bomb from his earlier invention of the atomic energy which borrowed heavily from the relativity formula E=mc2.

This formula which showed the relativity of mass and energy is the one that made Einstein make the atomic bomb. He discovered that smaller and smaller pieces of mass were able to be developed to huge amounts of power. This led to the modern day atomic bomb, which was a result of his many years of work on mass and its relativity with energy. His thought of developing the atomic bomb was guided by his desire to see peace prevail in the world. This is a cause he so strongly advocated and he had the idea that the atomic bomb would end conflicts without much of military combats.

After he was banished from Germany in 1933, he fled to the U. S where developed the atomic bomb which the military would later use in the Second World War. His E=mc2 formula from the theory of relativity has been assisting students of science to find solutions for scientific tasks that would otherwise have been impossible to solve. The formula has further enabled students make more advancements to Einstein’s earlier ones basing on the E=mc2 formula. Teachers can nowadays engage their students in leaning using different methods but the concept of energy still remains the same.

The E=mc2 formula can be changed using different letters or characters to suit the environment but Einstein’s concept remains unchanged. Albert Einstein’s development of the atomic bomb was a blessing to the American people and more specifically the military which was being overwhelmed by the war which was taking place in most parts orf the world. The military of the U. S. resulted to the atomic bomb as their last option to win the war, but they left a trail of deaths which haunt many people even to date.

The two atomic bombs which were detonated in Hiroshima and Nagasaki killed many people and it can be said that it was Einstein’s own mistake. To invent the atomic bomb was the greatest mistake that Einstein ever made in his entire career and life as a scientist. Although he had invented the bomb for a good cause, it was used for all the wrong reasons and the blame can only be directed to him without regarding who made the mistake. The bottom-line is that he is the one who is responsible for inventing the atomic bomb, whose mention sends shivers along many a people’s spine.

Albert Einstein is arguably the greatest scientist the world has ever seen in the 20th century (Moring, 2004, PP. 12-73). He was a genius in science, particularly in the field of physics where he helped shed light on some areas like the relativity of mass and energy. His inventions are very useful in today’s day to day activities. The concept of atomic energy that he came up with serves to supplement the already existing sources of energy which are inadequate. For all his inventions it would be fair to say that he did both good and bad things. His invention of the atomic bomb was the worst thing he ever made in life.

Although he had made it for a good purpose, it was used for the wrong reasons; to decimate thousands of people during the Second World War. The Americans descended on the Japanese using the atomic bomb and the effects are felt up to date. It may be argued that had he not invented the atomic bomb, the Second World War would have continued unabated and many more people would have been killed (Abraham, 1982, PP. 32 79). This should not, however, be used as way a of justifying the killings that happened as a result of the atomic bombs that were used in Hiroshima and Nagasaki.

Albert Einstein As A Noble Prize. (2016, Sep 10). Retrieved from https://studymoose.com/albert-einstein-as-a-noble-prize-essay 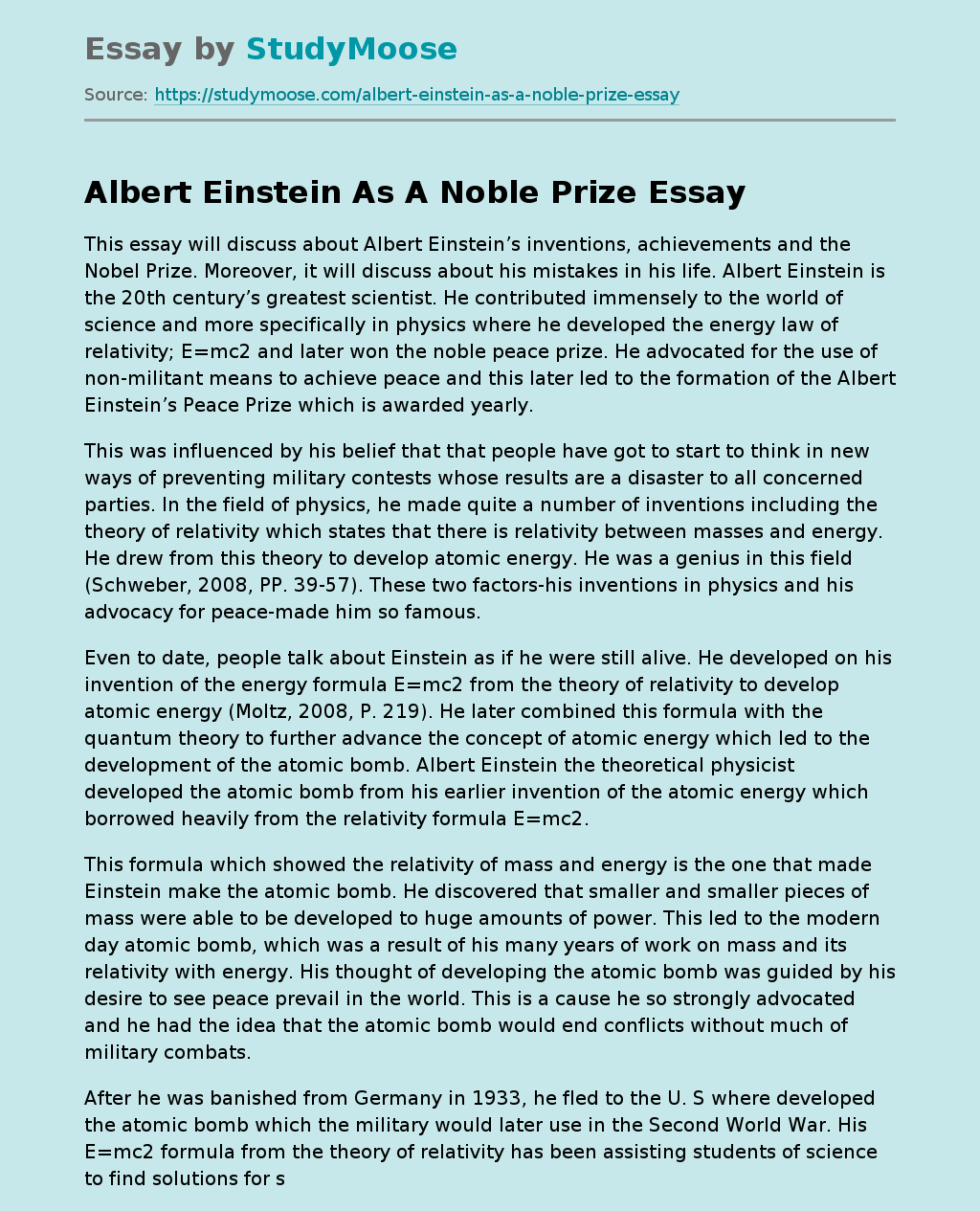