This paper will discuss Alan Mulally and the role of leadership and how it affects organizational performance. Alan Mulally is currently the Chief Executive Officer for Ford Motor Company, a position that he has held since 2006 (Hellriegel and Slocum, 2011, p. 543). This paper will discuss the leadership style of Alan Mulally and explain how his actions fit a particular leadership style by listing examples. His goal setting process will also be discussed along with how the process helped Ford Motor Company increase its performance.

Mulally’s communication elements will also be assessed along with the effectiveness of his leadership style to determine if it should change or stay the same. Discuss the role of leadership and how it can impact organizational performance.

Organizational performance can be impacted greatly by their leaders. In order to understand how much impact leaders can have, one must first understand what leadership is. Leadership, as defined by Harvard University business professor D. Quinn Mills, is “a process by which one person influences the thoughts, attitudes, and behaviors of others.

Leaders set a direction for the rest of us; they help us see what lies ahead; they help us visualize what we might achieve; they encourage us and inspire us. Without leadership a group of human beings quickly degenerates into argument and conflict, because we see things in different ways and lean toward different solutions. Leadership helps to point us in the same direction and harness our efforts jointly. Leadership is the ability to get other people to do something significant that they might not otherwise do.

Organizational performance is a reflection of its leaders performance and ability to lead. It is important for leaders to have the company’s best interest at heart and that they are not only out to achieve personal gain. Leaders have to have the ability to motivate their followers and encourage promising results. The case study showed that Alan Mulally had the right attitude and the ambition to lead. Mulally cared about his customers and employees and was passionate about his business and the work that he did.

A leader has to make a commitment to his or her vision, to the organization, and to the members of the organization. A leader can’t be committed one day and uninterested the next. People will judge a leader by his or her commitment, and will commit themselves no more than the leader does. A leader assumes a considerable amount of responsibility—not just for the mission that he or she urges others to accept, nor just for the organization he or she heads, but for his or her followers, their lives and efforts, as well (Mills, 2005, 14). Discuss Mulally’s leadership style at Ford Motor Company and provide examples of how his actions fit this style. Mulally’s leadership style can best be defined as Transformational Leadership. This leadership style involves anticipating future trends, inspiring followers to understand and embrace a new vision of possibilities, developing others to be leaders or better leaders, and building the organization or group into a community of challenged and rewarded learners (Hellriegel and Slocum, 2011, p. 328). Transformational leadership allows the leader to influence their followers and make them a part of the transformation as well.

Mulally has many aspects that makes him a transformational leader. He came to Ford Motor Company with a vision for the future of the company and began implementing it day one. He solicited input from his employees by holding meetings with his employees every Thursday morning. He believed that each department contributed to the companies performance as a whole. Transformational leaders challenges and motivates others as well as cares about the success of their followers as well. Alan Mulally is a true Transformational leader for these reasons and many more. Discuss how goal setting helped Ford improve its performance.

Goal setting is an important part of a company’s success. Implementation is an even more important step. Excellent goals can be made, but if action is not taken then they don’t mean anything. It’s the action that makes the true difference and can actually make a change in performance.

When Mulally came to Ford he created a new set of goals and a revised definition for the company. There were four goals total, and they were labeled as “Expected Behaviors.” These goals were listed on one side of a plastic card while “One Ford,” the revised definition of the company was listed on the other. The four expected behaviors are Foster Functional and Technical Excellence, Own Working Together, Role Model Ford Values, and Deliver Results. The new definition of the company, titled “One Ford” was listed as One Team, One Plan, and One Goal (Hellriegel and Slocum, 2011, p. 545).

“Ford’s financial independence is largely due to a new operational discipline that Mulally has installed, as well as some timely strategic moves he initiated. So while GM suffered the ignominy of seeing the Treasury Department’s auto task force depose chairman and CEO Rick Wagoner, and Chrysler has declared bankruptcy, Ford stands alone as an independent company and, potentially, a Detroit survivor” (Taylor, 2009). This shows that Mulally brought a different mindset to Ford Motor Company and has helped it avoid drastic financial troubles as its other American born competitors GM and Chrysler. Assess Mulally on each element in communication openness including message transmission, trust, agendas and goals.

Alan Mulally came to Ford Motor Company with change on his mind. In order for change to be effective, communication is the key. Alan Mulally is a leader that leads by example which is also important in the realm of communication. In many cases your actions make a bigger difference than your words.

As far as the elements of communication openness goes, Mulally was very effective with getting his point across. Mulally communicated his goals by listing them on a plastic card and labeling them as “Expected Behaviors.” He communicated his agenda by holding Thursday morning meetings with his direct reports and 12 functional areas of the company. Mulally builds trust from his reputation from Boeing and his openness of company happenings. Mulally is open with his employees about what goes on in the company and feels like everyone should be in the know. Evaluate the effectiveness of Mulally’s leadership style and recommend whether he should continue with this style, or use a different style.

I believe that Mulally has a remarkably effective leadership style and that he should not change a thing. Mulally holds meetings every Thursday morning at 8:00am with his direct reports, discussing their four profit areas. After that he has presentations from 12 functional areas of the company. Mulally believes that everyone has to be involved and has to know what is going on (Hellriegel and Slocum, 2011, p. 545).

Mulally doesn’t grind his employees with questions to humiliate them. Instead he looks forward and tries to create a plan. He also doesn’t allow Blackberry devices or side conversations in the meeting room (Hellriegel and Slocum, 2011, p. 545). This alone shows that Mulally has Ford’s best interest at heart and he wants all of his executives to take their jobs seriously. 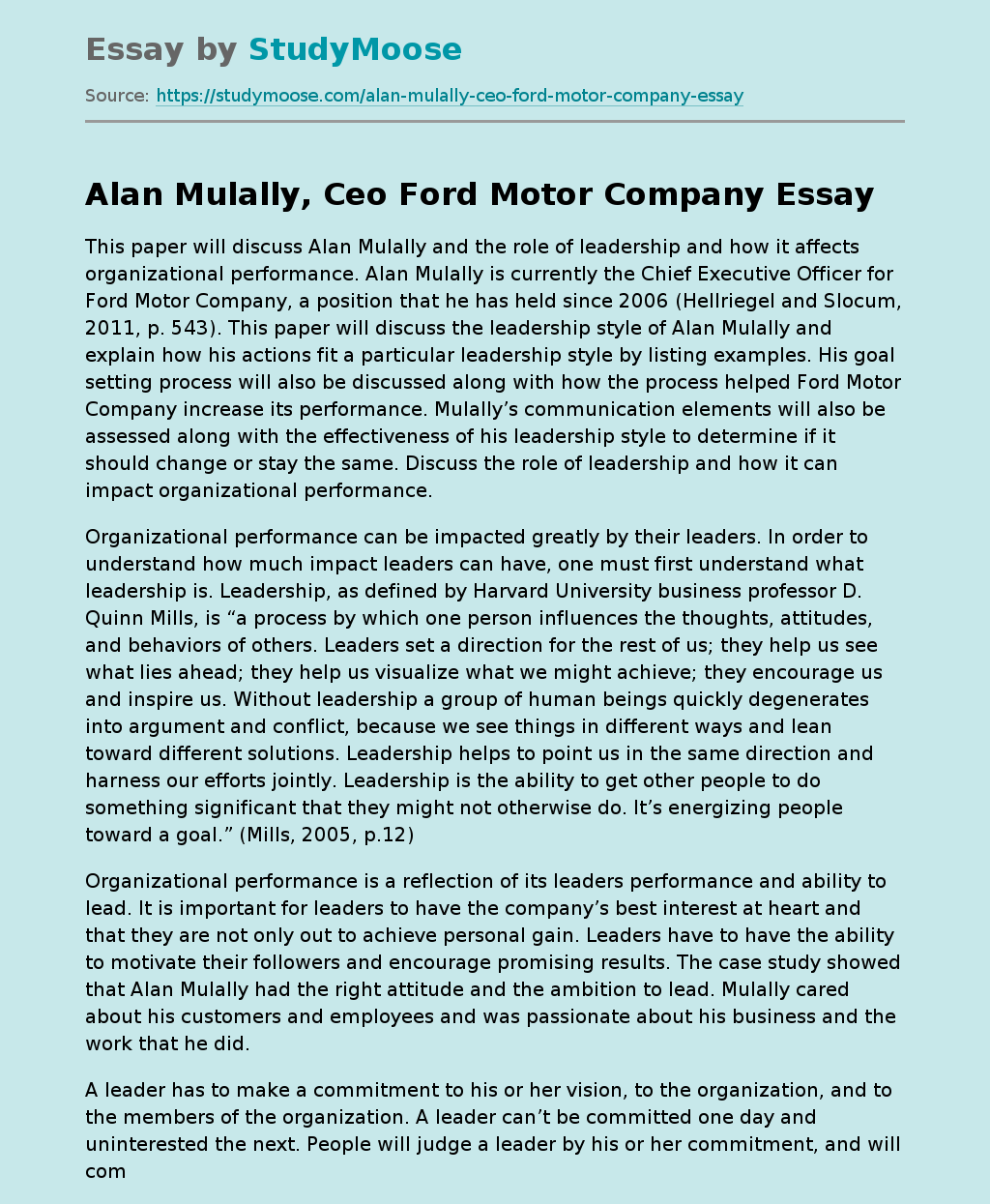