Air Transat is a Canadian airline based in Montreal, Quebec. It was founded in 1987, and is owned by Transat A.T. Inc. According to Air Transat’s website, their mission statement is:

“Air Transat is Canada’s leading holiday travel airline. Every year, it carries some 3 million passengers to nearly 60 destinations in 25 countries aboard its fleet of Airbus wide-body jets. The company employs approximately 2,000 people. Air Transat is a business unit of Transat A.T. Inc., an integrated international tour operator with more than 60 destination countries and that distributes products in over 50 countries.

“Transat A.T. Inc. is an integrated international tour operator with more than 60 destination countries and that distributes products in over 50 countries. A holiday travel specialist, Transat operates mainly in Canada and Europe, as well as in the Caribbean, Mexico and the Mediterranean Basin. Montreal-based Transat is also active in air transportation, destination services and distribution.

Air Transat presents its products and services by stating that is a leading holiday travel airline that is owned and operated by Transat A.T. Inc. The types of customers served are international passengers within the 60 destinations that they operate in. Air Transat geographically covers 60 destinations in 25 countries. One of the ways Air Transat is distinguished from its competitors within the industry is by being give the world’s Best Leisure Airline two years ago in July 2012.

According to Air Transat’s website, their vision statement is:

“At Transat, we recognize the prime importance of the environment, host communities, cultural diversity, and our relationships with our employees, customers and partners. At Air Transat too… Then, Air Transat is committed to reducing its ecological footprint, and has adopted an environmental policy.”

This vision statement does not focus on the future they see in their vision with host communities, diversity, employees, customers, and partners. However, it focuses on the environment. It has done that by creating an environmental policy, which is committed to doing the following according to Air Transat’s website:

1. Complying with all applicable municipal, provincial, federal, and international legal requirements, exceeding compliance wherever practical and possible. 2. Certifying our environmental systems and performance to the highest standards, such as ISO14001, IENVa, LEED, ICI ON RECYCLE and Fly-360-Green. 3. Conserving natural resources, such as energy and water, and preventing pollution in our operations, buildings, and supply chains through source reduction, re-use, recycling and control. 4. Continuously improving our environmental performance by setting and reviewing objectives and targets, and by training and involving our employees and stakeholders whose activities have a significant environmental impact. 5. Collaborating with all of our key stakeholders (employees, suppliers, communities, governments and industry groups) regarding environmental, sustainable development, and corporate social responsibility initiatives and issues.

Surprisingly, I did not find a strategic objectives statement on Air Transat’s website. There were no statements regarding how they will put their mission statement into action, or how their goals will be achieved. However, there is a page that lists and summarizes all Air Transat’s awards, rewards, and recognition.

The definition of PEST analysis according to businessdictionary.com is:

Air Transat could benefit from the change in consumer behavior resulting from the aging population in Canada by targeting the elderly population through advertising and promotions. For example, they could offer retirement packages, and certain promotions for specific destinations or at specific seasons of the year. Air Transat would need to conduct extensive market research about this matter to take into consideration that most retired people are on a fixed income or might not be healthy enough to fly etc.

With the increased use of technology, wireless Internet is not only important for business traveler but also for leisure travelers. Even though it is not that common for aircrafts to offer wireless Internet during their flight, it being launched. Air Transat should consider offering this service, as it might be an attractive feature for many travelers.

According to investopedia.com, the definition of Porter’s Five forces is:

“Named after Michael E. Porter, this model identifies and analyzes 5 competitive forces that shape every industry, and helps determine an industry’s weaknesses and strengths.

1. Competition in the industry
2. Potential of new entrants into industry
3. Power of suppliers
4. Power of customers
5. Threat of substitute products”

The threat of new entry into the airline industry is very weak due to a few factors including very large capital required, major airports are highly congested, slow growth rates and with many reputable airlines already, brand loyalty may not be easy to establish due to the competition. This force is likely to remain weak.

Competitive Rivalry is ranked as high because there are a high number of airlines operating both domestically and internationally with very competitive prices that Air Transat will need to constantly try to match. The fixed cost is very high such as the cost of oil, which cannot be controlled to a great extent. There is also a low product differentiation meaning that even though Air Transat is a leisure airline, there are still many other airlines that offer service to the same destinations at similar prices. Most airlines offer some type of frequent flyer program, which causes passengers who are members of these programs to be loyal to their airlines. This force could become even higher due to the increased competition.

Bargaining power of suppliers is Moderate. Airlines are usually in a long-term contract with airline manufacturers, which also limit drastic increases in prices during that contract but because there are only two airline manufacturers; Boeing, and Airbus. They have a lot of power to make changes that Air Transat would be bound to accept. Labor my also be an issue because positions such as pilots, aerospace engineers, managers, and marketers may require high salaries and may not be easily found in the market. However, the salaries for labor in the airline industry are standardized over similar airlines. This force is likely to stay the same.

Bargaining power of buyers is weak. Individual flyers, travel agencies, and online portals can all easily switch to different airlines due to low switching costs. However, the pool of customers is very large ranging from individual customers to large organizations. This force is likely to become weaker over time.

Threat of substitutes is moderate within the airline industry because there are numerous airlines that offer service to the same destinations as Air Transat with similar prices, which does not limit the chance of customers switching to different airlines. However, that kind of standardization over the industry does not make other airlines more attractive than Air Transat. Threat of substitutes outside the industry is low because many destinations cannot be reached in a timely manner without flying, specially international ones. Flying is faster and safer than road, rail, or marine. I believe this force will become weaker over time.

Since Air Transat is well established in Canada, they have the chance to grow internationally beyond Europe. They can also take advantage of the current growth in the aging population in Canada by targeting that market and researching different ways to attract older customers. They could create a frequent flyer program specially designed for seniors. With Air Transat’s sold reputation, they could also have contracts with European organizations to provide them services. Air Transat could take advantages of the new developments in technology by providing wireless internet on their aircrafts and also by launching a new type of aircraft for European destinations such as the double decker plane that Emirates airlines launched.

The main threat is the price of oil increasing is the highest cost for airlines now. A sudden spike in the price of oil could have negative impacts on Air Transat causing it to terminate service to one of their 60 destinations. There are other threats such as safety concerns due to the fear of terrorist attack, changes in government regulations and environmental issues.

The airline/aviation industry overall is a great industry to be in for existing airlines, but a very hard one to get into for new airlines. Air Transat has a lot of potential to grow in the European market, and even farther. 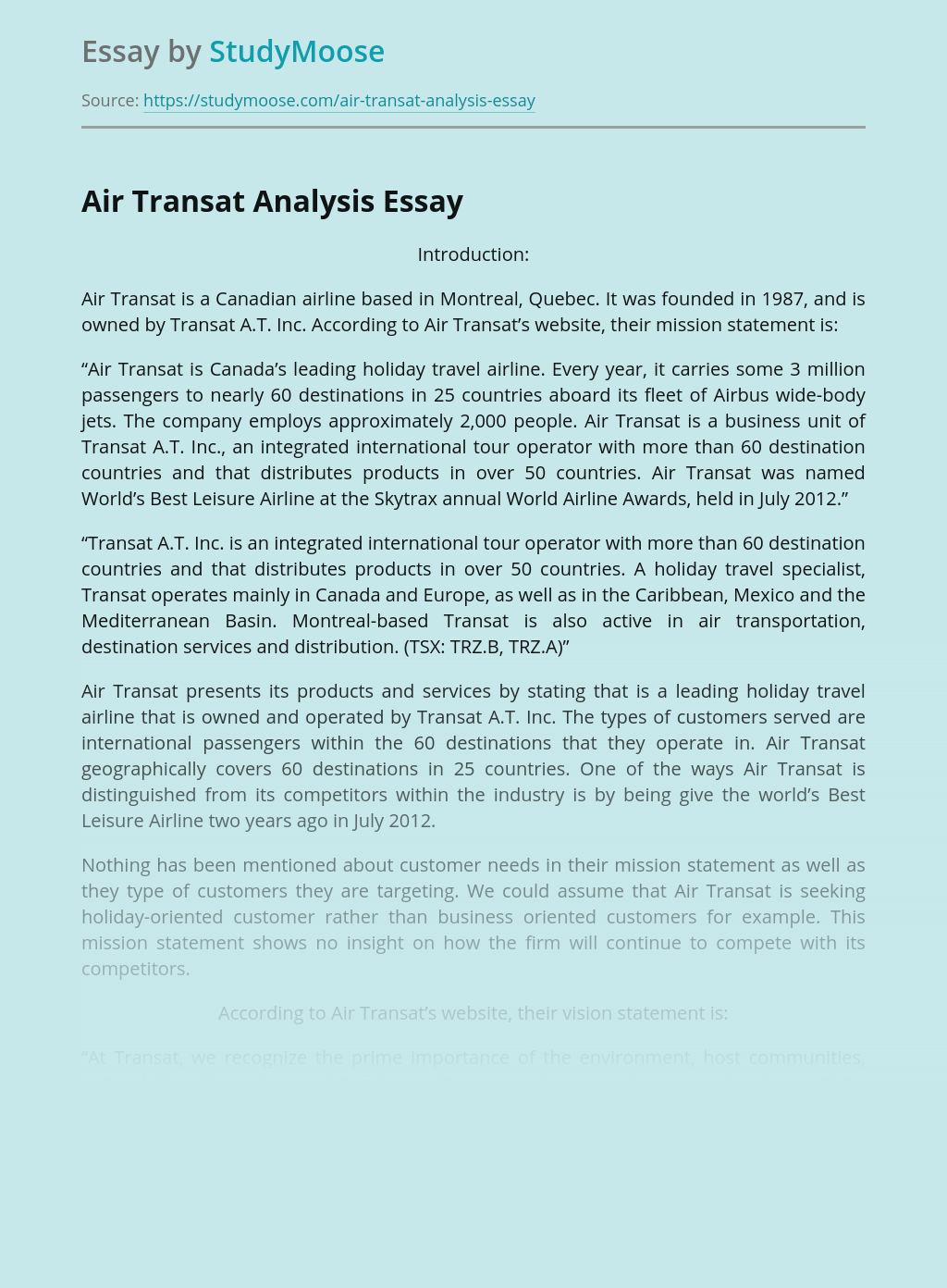