Hong Kong is one of the busiest cities in the world. It is not only prominent as an Asian commercial center, but also famous for its air pollution, which haunts the lives of thousands of Hong Kong people and wastes billions of dollars of the government and the private sectors every year.

It is an unchanging fact that air pollution in Hong Kong not only results in a waste of massive amounts of money, but also results in deterioration on the overall health standard of the Hong Kong population.

Don't use plagiarized sources.
Get Your Custom Essay on Air Pollution: Causes, Problems, and Solutions In Hong Kong Just from $13,9/Page

For the part of solutions, I will focus more on the issues of the Government and what the public can do to help to eliminate the problems of air pollution, so that Hong Kong can continue to prosper in the coming future

The causes and problems:

These diesel fuels used account for 70% of the total distance traveled on the roads. It also states that in Hong Kong, 98% of RSP and 85% of NO2 from vehicular sources come from diesels. Besides, commercial trucks in Hong Kong, like truck, and lorries are on the roads all the time. They contribute to 55% of the overall RSP and 43% of the NO2 in Hong Kong. Thus this large proportion of air pollution particles from the emission of vehicles causes Hong Kong to be one of the busiest cities, as well as one of the most polluted cities in the world.

It is easy for people to notice the outdoor air pollution in Hong Kong, but how about indoor air pollution? It is estimated that people spend 90% of their time indoors. In Hong Kong, most of the indoor places are air-conditioned, which means, there is a high possibility that the air is poorly ventilated, especially when a large group of people are crowded together in small places. Examples of the indoor pollutants are, VOCs from paints, paint thinners, and glues for construction of furniture and buildings; environmental tobacco smoke from smoking; carbon dioxide from human breathing; radon from decayed components of some types of cement blends; formaldehyde that comes from new furniture and renovation materials; RSP from sanding wood, operating equipment and printing; harmful bacteria from ventilation, air conditioning systems, and the ozone.

These cause many different health problems, such as irritation and respiratory problems, coughs, acceleration of the reoccurrence of asthma, skin rashes, headaches, legionnaire’s disease and eye irritations. Prolonged exposure to these indoor air pollution sources may even cause brain damage, leukemia and cancer. Although every person in the community is pronged to these different effects of indoor air pollution, some people in the community are more vulnerable to these exposed threats of life.

They are the people with respiratory diseases such as asthma and chronic bronchitis, children and the elderly. Children are more at risks than adults because children’s lungs are still developing and that their airways can be more easily obstructed when irritated. They are also closer to the ground than adults and so closer to the emissions of the vehicles and the heavier pollutants. As for the elderly, their lungs and their ability to resist irritants and diseases are deteriorating and thus more vulnerable when exposed to the different pollutants mentioned above.

1 What does the Government plan to do?

The government in these recent years has sought out a number of methods and policies to tackle air pollution caused by vehicle emission. Firstly, according to a news release from the Government News & Information System, 2000, it is said that the Government has new action plans to encourage the introduction of environmentally-friendly hybrid vehicles or those powered by natural gas or fuel cells. In addition, these initiatives will be implemented in the next few years, hoping to reduce the emission of particulates in the urban area by 70% and nitrogen oxides by more than 19%. Secondly, in the same news release, it is said that the conversion of LPG taxis is greatly supported by the Government with a grant of $40000 for the taxi drivers to buy LPG taxis. There is also a low pump price of LPG and will save about $35000 of the running cost a year. Thirdly, in 1995, the Government set up the Environmental Protection Department to measure the air pollution in Hong Kong.

The air pollution is measured by the Air Pollution Index (API), and is used to report the air quality in different districts so as to warn people with respiratory problems to prevent places that are highly polluted. (Aidia et al, 2000). Fourthly, there are about 40000 medium and heavy diesel vehicles in Hong Kong and are all subjected to ongoing operational trials and that the Government intends to provide free installation of catalytic converters which can reduce up to 50% of the particulates emitted for all old diesel engines.

Fifthly, the Government intends to reduce the benzene content in petrol to less than 1% in 2000, reduce the sulphur content of motor diesel to less than 0.035% in January of 2001 and to introduce ultra low sulphur diesel, with less than 0.005% of sulphur, initially in the franchised bus fleet. (Yeoh, March 2000). Lastly, according to The Planning, Environment, and Lands Bureau in 1999, it is decided that there will be a smoky vehicle control program and introduction an advanced smoking test by a chassis dynamometer to check the smoke emissions of smoky vehicles. From the same source, it is also said that the police will be equipped with portable smoke meters to spot smoky vehicles.

2 .What can individuals do?

As for indoor air pollution, there are different ways to deal with those dreadful particles. According to Borwein (2000), there are six ways to deal with the problem of indoor air pollution. It is always good to install indoor air cleaners. This can help to filter the dust particles, the molds, and tobacco smoke in the air and maintain the quality of the air indoors, particularly in bedrooms. It is very also important to have exhaust fans, gas stoves and clothes dryers vented properly to the outside of the flat so that the polluted air will not linger inside the house, causing the quality of indoor air to decrease. In additional, it is also necessary to wash and dry the filters and evaporation trays of dehumidifiers, refrigerators, air cleaners, and air conditioners to prevent the dust from staying there and lower the workability of these electrical appliances.

It is advisable to clean the flat frequently and keep it free of dust so that allergies and respiratory problems can be prevented. Also, we should try to bear in mind that we should never smoke indoors, especially when the place is not ventilated well. This is to prevent irritations to our respiratory systems and that prolonged exposure to tobacco smoke can cause cancer. A significant action to take to tackle indoor air pollution is to try to ventilate the indoor places that we go. It is also crucial to bear in mind that if necessary, stay away from the construction sites, decorating flats, and rooms.

3.Other things that can be done:

Thus, in my opinion, to halt air pollution in Hong Kong, there are a few things that the Government can do. First, students in every stage of education should be taught the sense of citizenship. Second, the Government can organize more large-scale public functions and activities to educate people in a large extent. Third, employers of drivers of trucks and lorries can help to set regulations for preventing drivers from using diesel from the mainland which is of a lower quality and results in the emission of much more polluted in the region of Hong Kong. Fourth, every person in Hong Kong should be responsible for protecting the breathing environment. If anyone sees a smoky vehicle or idling engines in the surrounding district, they should report it to the Environmental Protection Department so that the authorities can act as quickly as possible. Finally, the Government can try to consider the implementation of BioDiesel in Hong Kong. This kind of BioDiesel is made from converted used cooking oil and greasy tap waste. It contains no sulphur and emits much lower levels of toxins and harmful particulates and is less harmful to the human body than ordinary diesels.

It is an unchanging fact that the living standard of the world is improving and the air quality is declining, especially in Hong Kong and the surrounding territories. If we as citizens of Hong Kong do not try confront the threats of air pollution seriously and do not try to cooperate with the issues of the Government, our living standard, our health standard and eventually our economic standard will surely deteriorate to nothing in no time. 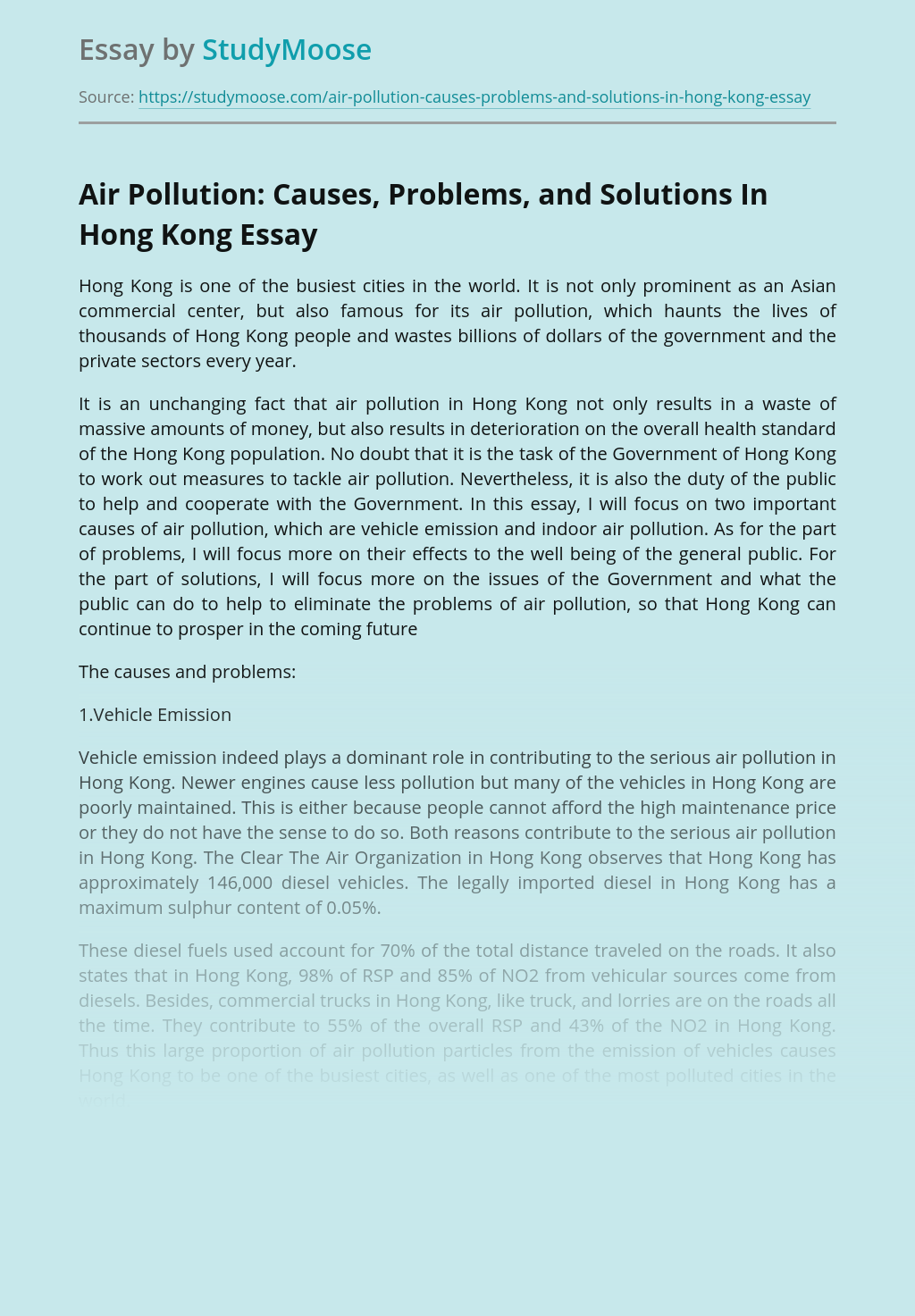 Marketing Report of the Amul Company, Including the Swot, Tows, Ifsa, Efas

1.0 Introduction 1.1 Background of the Industry The dairy industry plays an important role in the socio-economic development of India. The dairy industry in India is instrumental in providing cheap nutritional food to the vast population of India and also generates huge employment opportunities for people in rural places. The Department of Animal Husbandry, Dairying,... VIEW ESSAY

Culture refers to the norms, values and conceptions which influences an individual’s behavior. They are usually not tangible things though they greatly affect or influence the reactions or response of an individual to certain circumstances. Different communities have different cultures which are usually expressed through the various artifacts and symbols as well as ceremonies and... VIEW ESSAY

Ahmed Arroyo Cruz Modern&ContempWestCiv Politics and the Nation State The nation state is the concept that the people, or the majority of people living in a state, are aware that they share the same, or a similar culture to everyone in the state. It is a form of political organization characterized by having a clearly... VIEW ESSAY

Throughout my life I have always loved making other people feel happy and loved. I always feel amazing while I am volunteering, especially for children because it has changed their lives in amazing ways as well as my own. I often volunteer for A Kid Again, a company that is devoted to bringing children and... VIEW ESSAY

Statement of Problem Bed, Bath and Beyond (BBBY) currently has $400 million more in cash than they need for ongoing growth and operations requirements. While the company is financially sound analysts and investors worry about the company’s capital structure decisions. Investors do not want to see that much cash on the books and worry that... VIEW ESSAY