A full service network carrier’s business model is typically based upon the operations of a hub-and-spoke route network (Vespermann & Holztrattner 2010). Air France-KLM group currently operates the largest network between Europe and the rest of the world. The network is coordinated around the two intercontinental hubs of Roissy-Charles de Gaulle and Amsterdam-Schiphol airports. These two hubs are organised in waves known as banks, combine connecting with point-to-point traffic. Air France-KLM group has a fleet of 573 aircraft which serves 253 destinations in 105 countries worldwide.

Created by the merger of Air France and KLM in 2004, the Air France-KLM Group focuses its activities in 3 main areas: passenger, cargo and aeronautical maintenance. The passenger business is Air France-KLM’s main activity, contributing some 80% of the Group’s revenues. As a FSNC, the Group offers all type of route network including short, medium and long-haul.

In which, the short and medium-haul network is a cornerstone of the Group’s development as its profitability has seen a significant deterioration since the 2009 crisis.

Therefore, Air France-KLM is now offering new services to Business and Premium Economy customers together with new catering. Passengers now have access to catering inspired by the service on long-haul flights. Air France and KLM also continue to improve their levels of in-flight service. The Economy class will be innovated and upgraded with new in-flight entertainment systems. While the Business class offers its passengers a high standard of comfort and greater privacy with a redesigned World Business Class cabin including new seats which convert into fully flat beds, a choice of meal tray and time of meal service based on their individual needs.

To facilitate and improve the airport experience for customers, Air France and KLM are developing the use of new technologies to enable boarding autonomy and streamline the baggage drop-off process. In June 2012, the two airlines decided to enhance their program for their frequent flyer customers by offering more reward ticket seat availability on the Air France and KLM European network and increasing the opportunities to earn miles.

The Group is also one of the founding members of SkyTeam, which enables it to extend and consolidate its reach across 187 countries. The cargo business is the second of the Group’s activities, representing some 11% of the total revenues. Air France-KLM has a market share of 29.6% in 2012 amongst the Association of European Airlines (AEA) and 6.6% at global level. During the financial year, the Group transported more than 1.4 million tons of cargo of which 66% in the passenger aircraft and 33 % in the dedicated cargo fleet, to a network of 251 destinations. In 2012, the new commercial strategy was deployed worldwide to improve efficiency and adapt to market conditions, and satisfy customers through more effective contractual conditions, adjusted customer segmentation, the implementation of a stronger key account team aligned with the organization of customers and the rationalization and simplification of the product portfolio. The acquisition of a 25% equity interest in Alitalia enables the Group to step up cooperation with the Italian airline and reinforce its presence in the Italian market, the fourth largest in Europe. Aircraft maintenance is the Air France-KLM Group’s third business.

This activity generates more than one billion euros of revenue with third-party customers. Aircraft Maintenance is an attractive market despite the growing constraints which was led by the economic crisis, continued with the reduction in flight schedules, route closures and the early retirement of the oldest aircraft. Also aircraft, engine and equipment manufacturers are developing their after-sales services on this market by offering clients increasingly-integrated maintenance solutions. AFI KLM E&M is well known as the number two global player in the multi-product MRO area by total revenues. AFI KLM E&M’s primary task is to guarantee the airworthiness of the Group’s fleet and oversee regulatory compliance. With 75-year-plus track record, AFI KLM E&M has the large-scale human, technical and financial resources it needs to carry out the job in terms of maintaining the group’s fleets, and of being a flagship player in the global marketplace. Air France-KLM group has one of the largest fleets in Europe with 605 aircraft, in which 573 were operational, the detail is as shown below:

At December 31, 2012, 40% of the total Group fleet was fully owned, 22% under finance lease, and 38% under operating lease. The Air France-KLM Group’s pro-active fleet aimed at ensuring a fleet scaled in line with traffic growth and achieving technical consistency, while reducing its environmental impact. 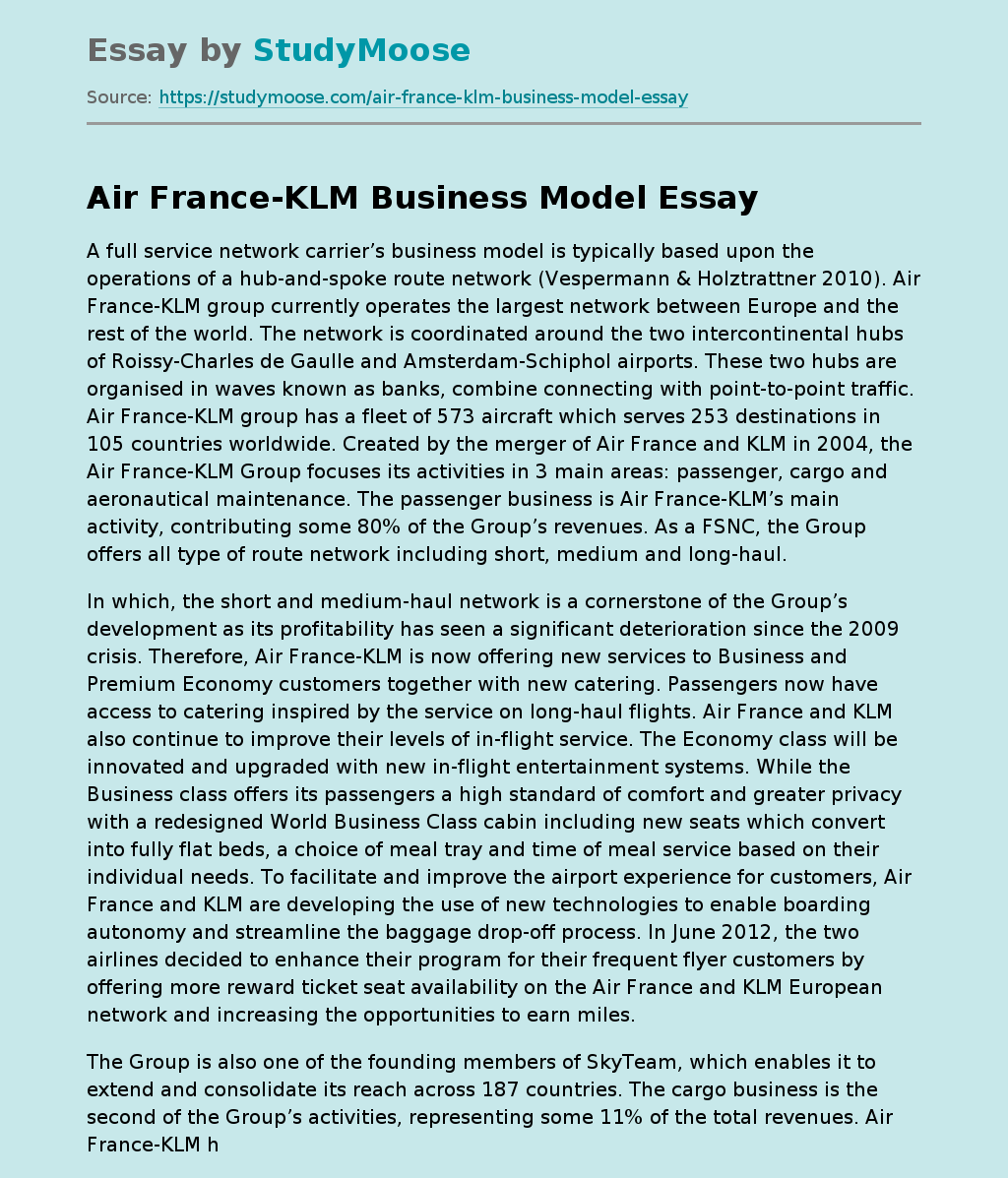