Year’s back, regional air routes were limited to only few airlines such as Bangkok Airways, Thai Airways, Phuket Air, and Air Andaman. Prime Minister Thaksin Shinawat announced the opening of Thai air routes by 2002 and this has influenced many airlines to enter the market especially lower cost airlines. At that time, Air Asia Malaysia was known as one of the most well-known budget airlines in southeast Asia and was operating in many Asian countries. After long on going negotiating processes with local companies, Air Asia Malaysia agreed to enter the partnership with Shin Corporation Public Ltd on November 12, 2003 to form Thai Air Asia Limited.

Don't use plagiarized sources. Get your custom essay on
“ Air Asia Company ”
Get custom paper
NEW! smart matching with writer

Using an effective and catchy slogan of “Now everyone can fly”, Thai Air Asia has completely changed the new ground of airline industry.

Travelers no longer were looking to fly expensive airline an expensive choice of transportation, rather one of the economically justified ways of traveling to international and domestic destinations. Air Asia considered advantages over other airlines in different ways.

For example, AirAsia experience of being in this industry for long time contributes to the already established service standard, operational expertise, and infrastructure readiness. Meanwhile contribute experience; bargaining power with suppliers was another advantage. According to the survey conducted by www.lowcostairline.org, the travellers ranked Air Asia as 8th number of the most favourite LCC (low cost carrier. Next, Shin Corp, local partner is very powerful business entity, which has high-diversified portfolio and strategic business units in media industry. This enables Air Asia the competitive edge to create awareness of the brand with budget airline industry as a whole.

Air Asia is inspired by the LCC business model of Southwest Airlines inspired Tony. Southwest Airlines established in 1971 that had been profitable every year since 1973. This model (LCC) adopted by Europe after liberalization of aviation industry. EasyJet (London) and Ryanair (Ireland) are the largest low cost carriers in Europe and they follow the same business model.Air Asia was established initially by DRB-Hicom Bhd early 1996, Asian financial crisis in 1997. Government reviewed Tony’s proposal to start a low cost carrier and refused to issue a new license and had requested Tony to buy over an existing airline. Tune Air set up by Tony and his investors bought AirAsia from DRB-Hicom on Dec 2001 for a token sum of RM 1, with its 2xBoeing 737-300s, a tinny route network and almost RM 40 million in debts. Tony Fernandez (VP, Times Warner Music, SEA), from music industry had RM 1 million in hand (mortaged house and sold off Times Warner Share Options) to pump into Air Asia. Air Asia’s LCC runs short destinations (less than 3 hours) and are low cost no-frills carrier serving routes in Asia.Air Asia was re-launched in January 2002, with prices lower than bus ticket for local destinations and even was giving away free tickets.

First day of operations started with RM 1 promotional price. Air Asia started with routes from KL, then from Johor (Senai Airport) in 2003. By Dec 2002, profits of RM 19.4 million with the stated revenue of RM 113 million and, 1.1 million passengers and most debts settled. They came out to measure cost cutting such as: Fuel consumption being cut by half, and landings are doubled with the tyres. Safety and service were given same priority as cost cutting measures. Problems raised were resolved within 24 hours as a KPI. AirAsia has many subsidiaries likes of Thai AirAsia, Air Asia Red Tix, Viet Jet AirAsia, and Indonesia AirAsia. Meanwhile, Air Asia associate companies are Air Asia X, Tune Money and Tune Hotel.

To be the largest LCC in Asia and serving the 3 billion people who are currently underserved with poor connectivity and high travelling fares.

To be the best company to work for whereby employees are treated as part of a big family To create an ASEAN brand which is recognised globally. Attaining the lowest cost (everyone can fly with AirAsia). To maintain the highest quality product and to use technology for enhancing service.

Summary of the case company

Air Asia is inspired by the LCC business model, which Tony Fernandes’s inspiration. The business model their strategies have played a key role in the success of AirAsia business. Commencing in 1996, within fifteen years, AirAsia managed to expand its operations to many local and international destinations with a slogan of everyone can fly. During serving years, AirAsia manage to intense competition with other airline industries by giving low fares, provide promotions, using technology to reduce cost and serve better, customer care and so on. These strategies helped them to growth rapidly and hit high revenue amount. Despite successful strategies, AirAsia is facing some challenges and problems from customer side and inside organization where it places AirAsia in declining state. As a leading LCC in the region, they need to provide high customer care and service, balance competitive low fares and profitability (although difficult to maintain due to rising fuel price), managing flight cancelation or delay, Asia heavy regulated travel rules and maybe more. Lastly, every company has their kind of challenges and problems they are facing whether they are hidden or visible and whether known or not.

There are many problems that customers are facing and need be addressed with proper solutions. As we researched articles, news, and comments (customer feedbacks and comments) about these problems, flight delay, customer service and hygiene were the main concern of AirAsia customers. Other problems like no providing wheelchair even paid the fee, denied boarding due to invalid reasons, damaged baggage, and oversold air ticket have been mentioned as well.

Flight delay is a serious problem for AirAsia customers. The flight schedule problems have a high gap compared with others in terms of assurance (Amiruddin, 2013). As we reviewed customer feedback, this issue was many customers concern as well. For example, a customer said Very disappointed with AirAsia services! Flight delayed for 3 hours. They announced when all passengers came to gate! We would highly appreciate text message indicates flight delay schedule!

In terms of empathy in AirAsia, the highest gap is regarding the customer service and the customers expect that service personals find ways to solve their problems/complaints but their perception is low and the service personnel do not meet their expectations (Amiruddin, 2013). As a recent feedback from an AirAsia customer, I guess their maximum guests for the queue is 99 customers at a time in the live chat. So more than that, you cannot connect to live chat with customer service. But how many millions of customer Air Asia has? If you miss the screen chat when the conversation started, you cannot resume your previous chat and shows “thank you for contacted live chat”. Connecting to staff chat takes usually another hour.c) HygieneAlthough hygiene is a factor that should be cared by customers as well but still it is AirAsia responsibility to offer clean services. One the customer shared the hygiene concern that cut price Airline, never cleaned. Sticky armrest, dirty seat tables most cases of Bali belly are caught on these planes, and their staffs should try the hardest. For the price, can’t complain.

How is the company trying to solve these problems

For the big companies like AirAsia, they try their best to minimise the problem in order to not lose their customers but sometimes it is really difficult to offer high quality service unless cutting budget from other parts. For delay or flight cancelations due to circumstances beyond their control, like unexpected incident, weather, air traffic control, security guests or any other non-carrier related reasons, they assist guests for meal and hotel. Guests shall pay all costs. If the circumstances within their control, like flight deployment/adjustments, aircraft maintenance, aircraft rotation, crew, they will provide light refreshments or adequate meal and potable water. If the flight delay is over 6 hours, they will provide hotel for passengers. If flight delay is more than 3 hours, they give below options to customers: Change the flight to another of our scheduled services, which has available space without additional charge. Retain fair value to the customer credit account. They offer hotels when flight delays over six hours. Refund the value to the customer’s bank account or debit/credit card if they choose not to proceed with their trip.

For solving customer’s problem, AirAsia is partnering with Salesforce revamp customer care across eight countries. As part of the revamp, AirAsia will deploy Salesforce Service Cloud, Sales Cloud, Marketing Cloud and Community Cloud for providing a 360-degree view of customer cases for their service agents across the countries. This new cloud-based software is available in eight different languages, and will be used to provide customers (guests) with self-service options powered by a knowledge database (Mitchell, 2018).

What is the basis (important facts) of its strategy

Now when people want to take airplane to travel to other places, AirAsia almost will be their first choice for the covered destinations. Basically when you say customers about low cost, their perception is low quality service. AirAsia strategy is to target customers who are looking for low fares to travel. So, these customers do not expect any extraordinary services, but only low fare and fast flying flights. Even with that, AirAsia provides good services to their customers in order to attract them. They pay much attention on customer safety although they are LCC. They use Streamline Operations to fasten service for the customers. It also provides a no seat assignment service for customers which customers find their seats comfortably. Many packages, loyalty programs, and promotions are provided for customers in order to get their satisfaction for the flight service. 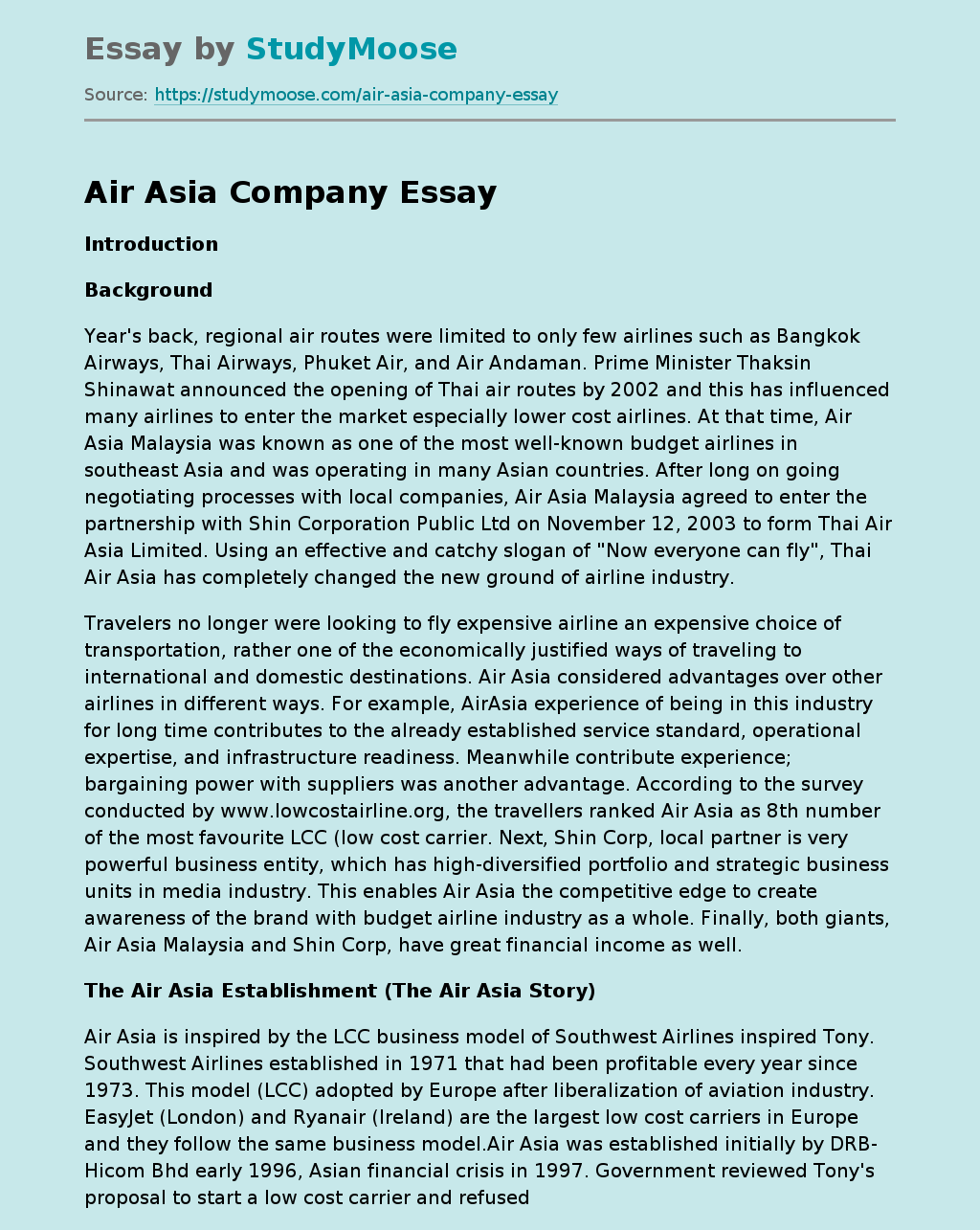