Agrippina the Younger, the wife of Claudius and mother of Nero, was one of the most famous women in Roman history and one of the greatest influences on Nero’s reign. She was an intelligent woman that was willing to do anything to help her son, Nero, inherit the throne. However, Nero thought that she was too powerful during his reign that he was the one to plan her death in 59 CE. Agrippina was born in Ara Ubiorum, Rome on November 6, 15 CE.

Turn in your highest-quality paper
Get a qualified writer to help you with
“ Agrippina the Younger ”
Get high-quality paper
NEW! AI matching with writers

Her parents, Agrippina the Elder and Germanicus Julius Caesar, were both grandchildren of Augustus. Agrippina had many other siblings.

When she was thirteen, the emperor Tiberius arranged her marriage to Gnaeus Germanicus Ahenobarbus, which occurred in 28. The following year, her mother and her oldest brother were arrested and exiled for plotting against Tiberius. Afterwards, both her mother and brother passed away. In 37, Agrippina gave birth to Lucius Domitius, who was also known as Nero. Then, Gaius Caligula, her brother, became the emperor.

He made Agrippina along with two other sisters honorary Vestal Virgins. He raised their status by adding their names to the annual oaths of allegiance to the emperor.

Caligula accused Agrippina and his other sister Livilla of having affairs with M. Aemilius Lepidus, whom he chose as his interim successor. Also, in 39, Agrippina joined a plot to assassinate Caligula. Therefore, Agrippina and Livilla were exiled to the Pontian Islands, off the coast of Southern Italy. While she was in exile, Agrippina’ husband died in 40 CE. In 41, Agrippina’s uncle, Claudius, became the emperor. Therefore, he brought her and her sister back from exile. Agrippina got married to Claudius in 49. Her goal was to make sure that Nero inherits the throne. Thus, she convinced Claudius to adopt Nero in 50 AD.

Agrippina eliminated all the potential enemies that will try to prevent Nero’s ascension to the throne. During the reign of Claudius, she received the title “Augusta”, becoming the first woman to be honored while her husband is alive and the second woman to be honored during her lifetime. Also, her name was attached to a colony for discharged veterans at oppidum Ubiorum. Unfortunately, Claudius died in 54 AD, and Agrippina was accused of poisoning him in order to make Nero the emperor. Nero inherited the throne in 54 AD. Agrippina had a lot of power during the early years of Nero’s reign, and she ruled most of the empire.

Nero had many conflicts with his mother during that time because she was bossy and tried to control him. She did not approve of his affair with Acte, a freedwoman. Since Nero was not obeying her, she started supporting Britannicus, his stepbrother and Claudius’s son. This led Nero to have Britannicus killed in 35. Then, Nero chose his mistress, Poppaea Sabina, over his mother. He forced Agrippina to move out of the palace in 55. Agrippina became too powerful during Nero’s reign that he constantly tried to reduce her power. Finally, Nero began to plot Agrippina’s death.

He attempted to sink the ship that she was on, but Agrippina survived and swam ashore. He sent assassin to her villa, where she was stabbed to death on 59 CE. Agrippina was cremated that same night after her death. Agrippina the Younger was very important during that time. She was one of the few women who were recognized while their husband was alive. She was determined to make Nero the emperor, and therefore, she eliminated all the people that will stop him from taking the throne. Even though she was responsible for the death of many significant people, she was still a powerful woman. 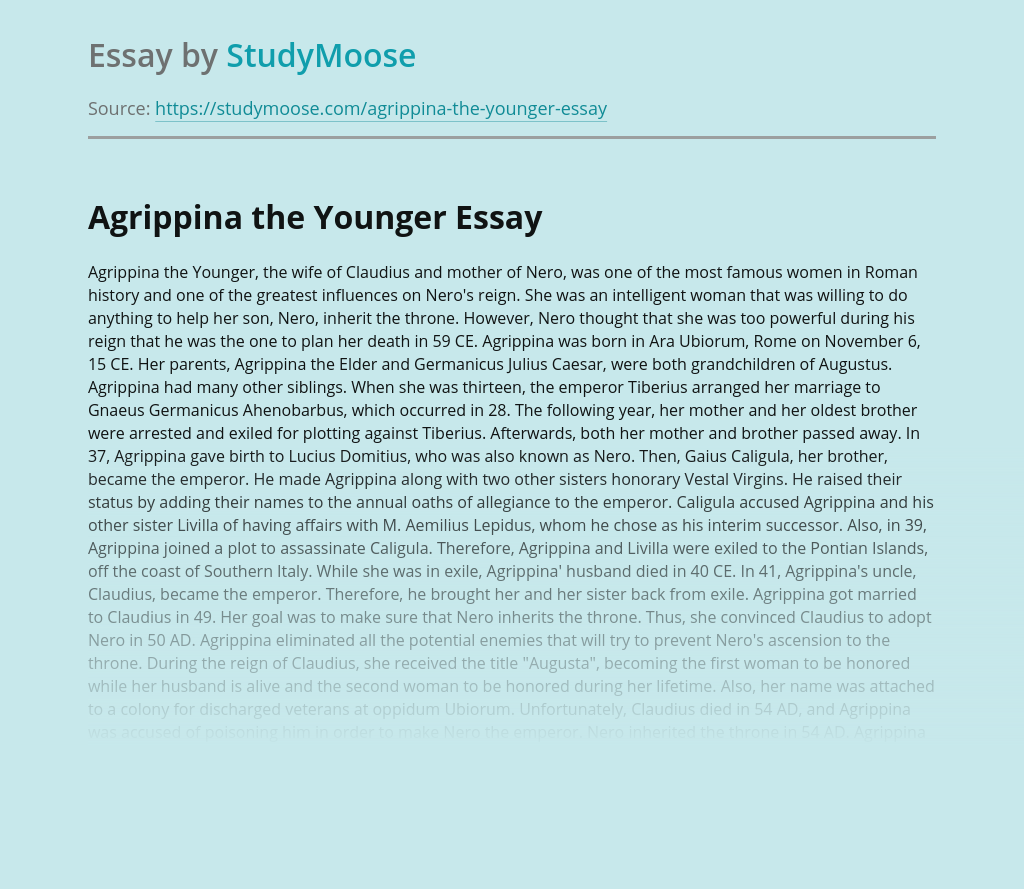 Turn in your highest-quality paper
Get a qualified writer to help you with
“ Agrippina the Younger ”
Get high-quality paper
Helping students since 2015
Stay Safe, Stay Original