In this essay, however, the term `agricultural revolution’, is used to refer to the, roughly, one hundred years after 1750.

In fact, the term itself is somewhat misleading, as the word `revolution’ means a full circle, or a cyclical return to an original starting point, whereas in this context the term is used to indicate a series of connected events occurring in linear fashion, and according to some historians, stretching back some centuries before 1750 and being part of, and central to, the industrial revolution.

Don't use plagiarized sources. Get your custom essay on
“ Agricultural Revolution, Productivity And Economic Growth ”
Get custom paper
NEW! smart matching with writer

What did the `agricultural revolution’ consist of

As is often the case, the answer is multi -causal, but there are several recognisable factors that can be pointed to. Firstly, and the most contentious by dint of the difference of opinion amongst historians, the removal of common property rights to land, or `enclosure’.

The enclosure process of denying access of cottagers and labourers to the farmlands and `commons’ of the parish, and the rights of use of those lands by private acts of Parliament was a serious blow to the rural poor who relied on the commons for a major part of their livelihood. The gathering of wood and kindling for fuel, the cutting of turfs and peat for the same purpose, along with the natural resources of vegetation and game, plus the grazing rights for what, if any, cattle they may have had were all taken away.

It is important to point out that whatever the impact that enclosure had, it was mainly regional in effect, only around a quarter of the country’s wastes and commons were involved, and while there can be no doubt that people in certain parts of the country were affected, some seriously; it was in no way a national phenomenon and its importance greatly outweighs its effects. It is worth noting, however, that another aspect of enclosure meant the `rapid accession to the cultivated area of large tracts of commons and waste, and for the common fields a rapid conversion to the conditions necessary for more efficient farming’.

So that while enclosure was important in preparing the ground for a more efficient means of producing food, without which the population could only reach a certain size, as according to the theory that land being a fixed resource, there was a natural population ceiling that only allowed growth when a certain food/person ratio was achieved,6 enclosure in this sense, refers to `official’ acts of forced Parliamentary enclosure, whilst enclosure amongst small farmers as a matter of consent and mutual benefit had been going on for some time.

Of equal significance is the impact of new technology and ways of thinking which turned an essentially organic and backward peasant economy into a progressive and successful industry. “For many years the agricultural revolution in England was thought to have occurred because of three major changes: the selective breeding of livestock; the removal of common property rights to land; and new systems of cropping, involving turnips and clover. All this was thought to have been due to a group of heroic individuals, who, according to one account, are `a band of men whose names are, or ought to be, household words with English farmers: Jethro Tull, Lord Townshend, Arthur Young, Bakewell, Coke of Holkham and the Collings.'”

These men are seen by some, as having a major part in the transformation of the English agricultural system from a `peasant subsistence economy to a thriving capitalist agricultural system, capable of feeding the teeming millions in the new industrial cities’.’ The dual effect of enclosure and the new ways and systems of working both contributed to the same end, but in different ways. Enclosure had turned some, but not all; cottagers and labourers, into wage earners alone, without the supplementation that access to the common land might bring to their standard of living.

While the new efficiency of farming methods meant that less man power was required to produce greater quantities of food than previously, this in turn meant that the levels of agricultural workers as had been previously required, were required no longer.

A consequence of falling agricultural wages and standards of living was the increasing dependence on the demeaning system of poor relief that operated at this time.9 The poor were effectively tied to the parish, which controlled the system of relief, so were thus denied the opportunity to travel elsewhere to find work. The vagaries of the `Poor law’ system contributed to making a bad situation worse for those caught up in its complexities.

This along with high food prices, especially during the Napoleonic wars, as well as the widespread depression at the end of those wars, due to amongst other factors the massive demobilisation of an army that was no longer required, all contributed to the rural riots and unrest that took place especially between 1816-1831.10

So how were the rural poor to respond

Any legal or official form of redress was denied to many, if not all of the agricultural labouring class. Given that any opposition to Parliamentary acts of enclosure were to be heard in London, and that the majority of the poor never went effectively beyond their own parish boundary, meant that such acts were often passed without any opposing voices heard by the commission responsible. Also, it would be a rare workingman, (it would invariably be a man) who could afford either the time or the expense of travelling to the capital from where ever in the country he happened to reside.

Given that literacy, and indeed articulacy, was a rarity amongst the poor, it would be a rare man who faced with a room of M.P’s or commissioners could state the case effectively, or creditably, for either himself or the villagers he claimed to speak for. That left only one other course of action, protest.

The history of the `agricultural revolution’ is littered with several phases of unrest, riot and revolt. From the Luddite movement from around 1810-1815, to the Welsh `Rebecca’ protestors, the Galway `Levellers’ and the `Captain Swing’ riots and destruction of the 1830’s, there has been a series of lower class, agrarian rebel movements.

In the case of the Luddite’s and the `Swing’ protests these took the form of the destruction of property, acts of vandalism against the machines that were seen as the destroyers of livelihoods, and of the need for labour. Other forms of protest were also utilised, as in the case of the opposition to enclosure. But it is in the `Captain Swing’ riots of 1830-31, that is seen as the rural poors ultimate and possibly inevitable, reply to the plight and distress they invariably found themselves in.

“The first threshing machine was destroyed at lower Hardres, near Canterbury in East Kent, on the night of 28 August 1830. The precise date is worth recording, as the breaking of machines was to become the characteristic feature of the labourer’s movement of 1830, which, starting in Kent, spread over a score of counties in the next three months. And yet machine breaking, while the most significant, was only one of the numerous forms that the labourer’s movement assumed. Arson, threatening (or `Swing’) letters; wages meetings; attacks on justices or overseers; riotous assemblies to extract money or provisions, or to enforce a reduction in rents or tithes -or even of taxes -all played their part.”12

While `Swing’ protests were violent, the only target for the labourer’s ire was mechanical or inanimate, hayrick burning, or the smashing of machines. Not a single instance of death or extreme injury was recorded in the accounts of the time; various persons may have been roughed up, or run out of the parish, but none seriously. In fact, some accounts of the later protests were said to be almost festive in aspect!

This did not appear so to the authorities however; whose response to anybody caught or otherwise implicated was typically harsh, with imprisonment, transportation, and in some cases death, being the result. In common with earlier protest movements, the `swing’ rioters were a movement without any recognisable leader; the very anonymity of signing threatening letters with the pseudonym `swing’ was a guarantee of that. Because there was no one to point to or accuse, the very name `swing’ took on an elusive, almost supernatural aspect to it, adding an air of fear and mystery to the letters, the recipients of which, could have probably attested to.

Although spread across several of the Southern counties, the unrest was not part of a national movement, the whole `swing’ phenomenon was strictly regional in nature and application, and as such, was not likely to have any lasting effect, not lasting much beyond 1831.

Regardless of the actions of the rural poor, the `agricultural revolution’ could not be undone, the new methods that utilised less manpower to produce more food than ever before could not be cast aside, nor would the mass of the populace who were not affected by them allow them to be. The changes the `revolution’ brought, allowed Britain to feed and support a significant increase in its population that it would not otherwise have been able to. The fact that this was achieved with a much smaller workforce enabled the surplus to be diverted to the towns and the factories to kick-start another `revolution’, but this time an industrial one. 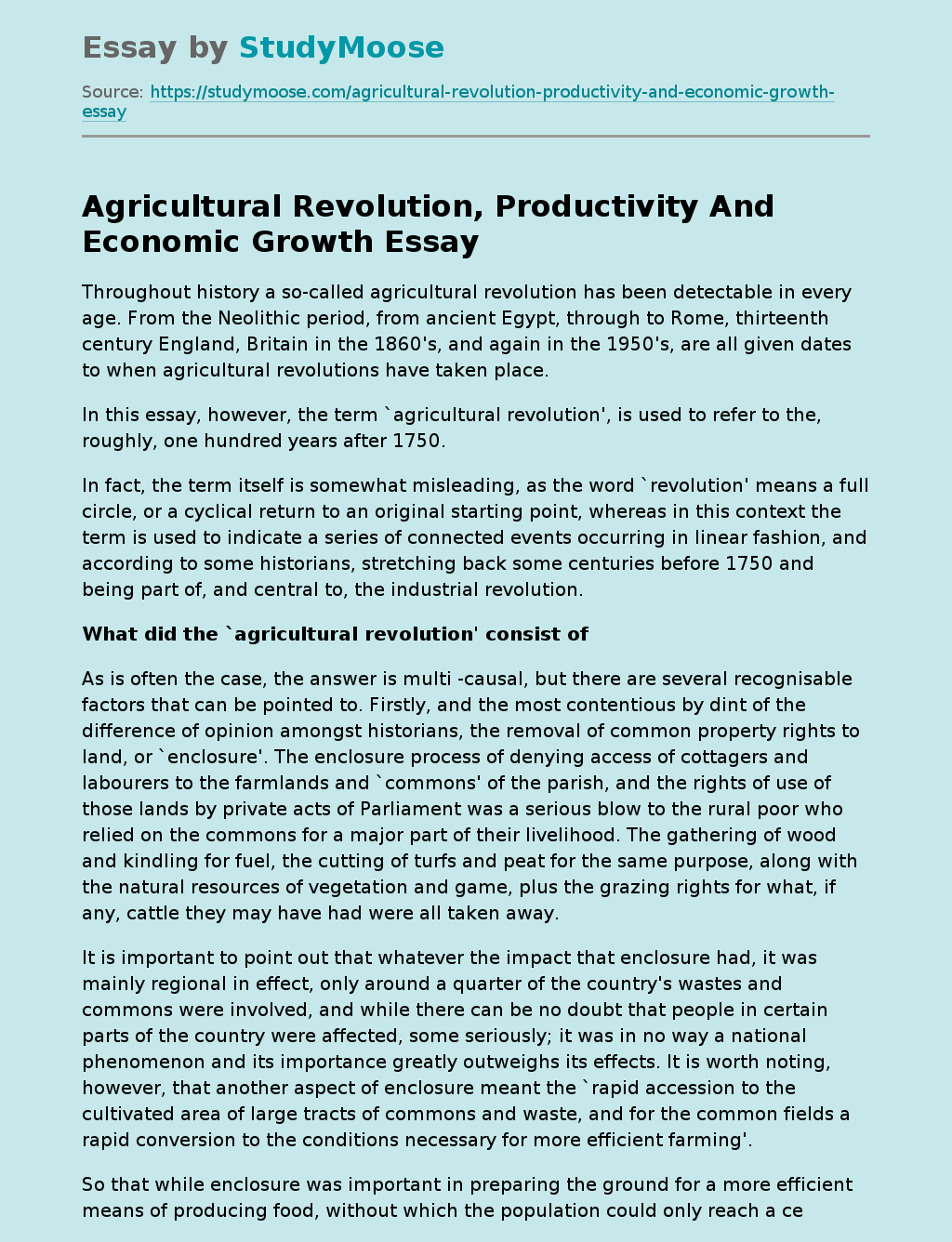