Agricultural and Industrial Revolution The agricultural revolution occurred between 1750 and 1900. It was a drastic change in the methods of farming. Farmers changed the way they grew their crops and used land. In the beginning of the eighteenth century, farmers had stripes of land on which they grew their crops on. This system the farmers used had many disadvantages. There was some space wasted where the strips were divided, the drainage system was poor and farmers had to leave their land unused for four years so the soil could regain its nutrients.

Don't use plagiarized sources. Get your custom essay on
“ Agricultural and Industrial Revolution Essay ”
Get custom paper
NEW! smart matching with writer

By the nineteenth century, farmers used the Norfolk Crop Rotation System (Field). In this system each area of land was split into four sections. Every year the crops would be rotated so all the soil wouldn’t lose all its nutrients. The Industrial revolution occurred between the 1800s and 1900s. It was a change from hand tools and handmade items, to products that were produced by machines. Farming became more efficient and prices of goods dropped as more items were manufactured.

Life generally improved. As new inventions were being created, more factories followed. The revolution also brought some consequences to society.

Machines were brought in and farming became more efficient. Farmers did not have to use hand tools and because of machinery farming became easy for them and more crops were produced in a short time.

The industrial revolution was the result of many fundamental changes that transformed agricultural economies into industrial ones (Field). One positive consequence of the agricultural revolution was the crop rotation. Crop rotation was a method of farming the farmers used, where they divided one piece of big land into four quarters and planted different crops on the land. Every year they would rotate the crops. This way the soil did not lose all its nutrients and more crops were produced. This improved farming for the farmers. Another consequence of the agricultural revolution is that it increased food supply.

More crops were being planted because of the amount of space the workers had. No space was wasted and therefore more was planted and more was being produced. After the beginning of the revolution some mechanical devices were being introduced, like the seed drill. This helped the workers in farming. Farming became more efficient. A negative consequence of the agricultural revolution is that agriculture ties the people to the land and concentrates them in the most fertile areas; and this puts a lot of stress on the local resources.

Fresh water was needed and it got contaminated by waste from lots of humans and livestock. When the land was turned into farmland it destroyed all the natural wildlife. Since the smaller fields were made to larger ones, at that time the large fields needed few workers. This lead to, many workers losing their jobs. Bibliography Field, Allison. “The agricultural and industrial revolution. ” 11 April 2001. School History. Accessed on 29 Oct 2007. Available at:http://www. schoolhistory. com/agriculturalrevolution. htm McKay, Buckler. “Industrial Revolution. ” History of western Society. 1993. 692 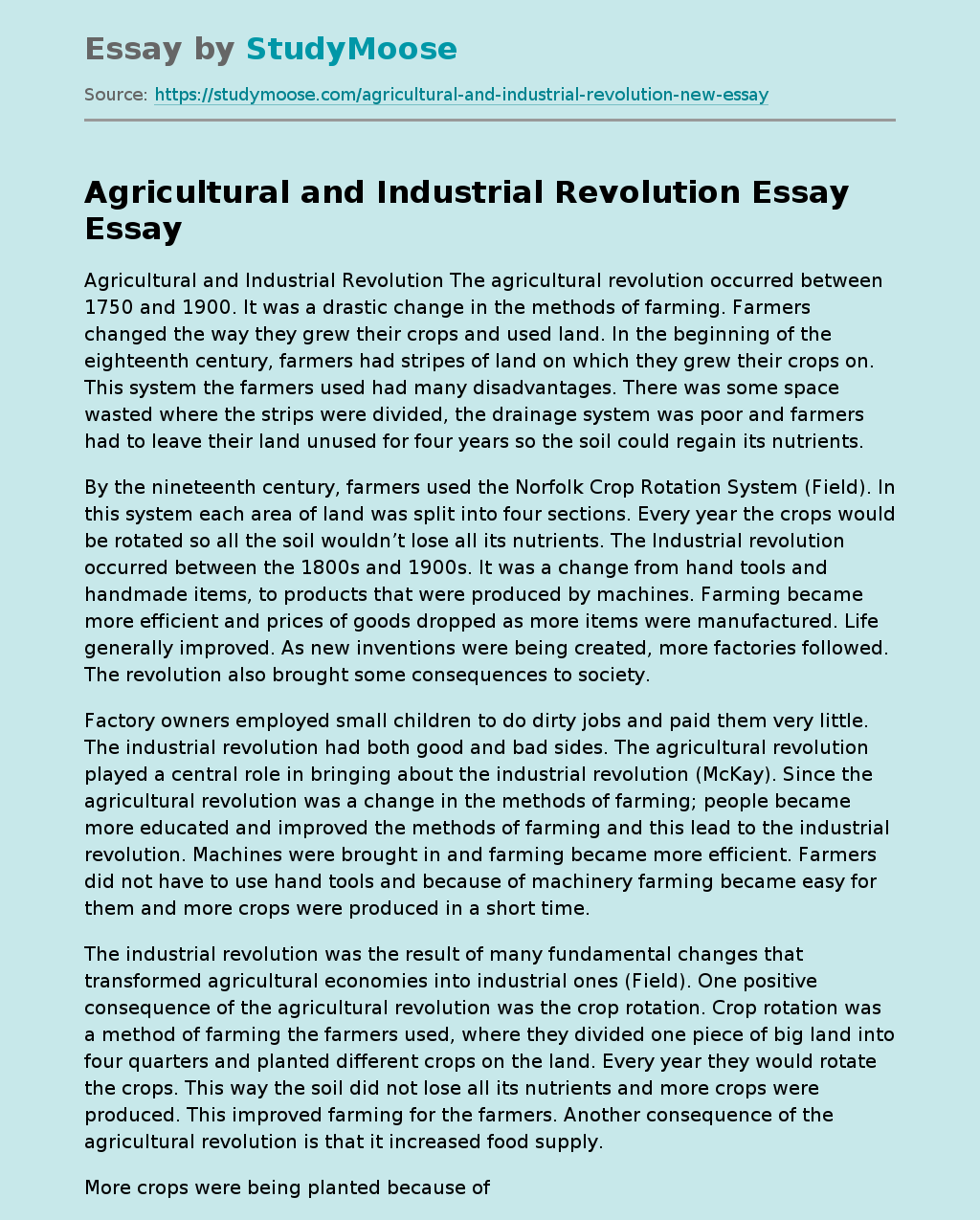