In Act 1 Scene 3, Othello is asked to defend and justify the accusations placed on him by Brabantio regarding his daughter, to which he replies, “Rude am I in my speech and little blessed with the soft phrase of peace”. This suggests that he possesses little talent in language and only feels himself capable of military talk. However, his speeches that follow thoroughly contradict this notion, and, through the use of various literary devices and expressive and powerful language, Shakespeare reveals to the audience that Othello is, in reality, very much removed from his earlier descriptions as, “and old black ram” and a “Barbary horse”.

Don't use plagiarized sources. Get your custom essay on
“ Would you agree that ‘There is an evident contrast between Othello’s description of his language and the language itself’ ”
Get custom paper
NEW! smart matching with writer

Firstly, it is evident that Othello uses highly articulate, intelligent and fascinating language in order to convey his feelings and past experiences. Othello says, “Till now some nine moons wasted”, which shows that his proficiency in words enables him to convert a very ordinary idea of months passing by, into a rather romantic and attractive image. Another example of this can be found in, “I will a round unvarnished tale deliver”, suggesting that he has no intention of disguising any details and that he will speak openly and plainly about the situation.

In this sentence, the words appear to be smooth and almost glide when spoken aloud, which gives them a somewhat rhythmical quality and may reflect the use of the word, “round”.

Othello uses extremely vivid and eloquent language when describing his exciting adventures and the exotic things he has witnessed, which helps to captivate and mesmerise the audience.

An example of this is, “Of hair-breadth scapes i’th’imminent deadly breach”. This portrays to the audience that Othello has been very close to death and only narrowly escaped this fate, with the plural “scapes” suggesting that it has happened more than once. The inversion of words is also apparent in Othello’s speeches, and is perhaps used as a means of giving particular words more emphasis than others. “Wherein of antres vast and deserts idle” is a good example of this, and is literally depicting vast caves and unoccupied deserts.

However, by placing the adjective after the noun, the true immensity and emptiness of the areas is stressed and enforced. The word “draw” is used twice in relatively close proximity, which is often frowned upon and seen as a poor use of language in other situations. However, in this instance, it is used deliberately as a way of portraying the magnetic effect that Desdemona has towards Othello. He also uses the word “beguile” intentionally, as it was a word used by the Duke earlier to suggest that Desdemona had been enticed from her true self. A further way in which Othello demonstrates his fluency and ability in language is by reflecting, through his own speech, what Desdemona once said in reaction to his life stories.

Here, Othello seems to be echoing what Desdemona said to him after he had finished his tale, which shows how truly amazed and astounded she was by it. The repetition of the words “strange” and “pitiful” also highlight her astonishment.

In the final lines of Othello’s speech about his life adventures, he sums up how the relationship began between Desdemona and himself.

“She loved me for the dangers I had passed,

And I loved her, that she did pity them.

This only is the witchcraft I have used.”

These concluding lines are beautifully balanced and certainly reflect the expertise of the speech maker, with the repetition of “loved” showing the couple’s mutual affection for each other and the fact that no such witchcraft was used, contrary to previous allegations.

Aside from the wonderful language that Othello uses in this scene, there are also countless literary devices that help to really bring the language alive. Firstly, Othello uses alliteration, which is a useful device as it generally alerts the audience and puts greater emphasis on the words used. “Broil and battle” is an example of this, and it is interesting that even the words have a strong texture to them, making them sound harsh and sharp, like the definitions of the words themselves.

Othello also uses rhythm as a device within his speeches, which often creates quite a poetic, flowing effect.

“Her father loved me, oft invited me,

In these lines, there is a specific rhythmical pattern, which accentuates the verbs, perhaps reflecting the sense of eagerness and impatience that Brabantio felt towards hearing more of Othello’s stories.

He also uses a great deal of repetition throughout his speeches, which again, place more consequence and prominence on words. One instance of this can be found in, “the battles, sieges, fortunes”. It is significant that Shakespeare has chosen to use three words consecutively, as it is known that words in threes get more emphasis. Othello therefore uses this to underline the immense number of battles, sieges and fortunes he has witnessed and experienced in his lifetime. He also repeats the word “of” frequently when listing all of the remarkable events he has encountered and survived through in the past. This, similarly to the previous example, lays emphasis on the wide range of different and frightening experiences he has had.

A further literary device employed within this scene is personification and the use of metaphors.

“She’d come again, and with a greedy ear

Devour up my discourse…..”

Here, it is evident that Desdemona’s ear is being personified, to make it seem like it is alive and literally consuming Othello’s speech. Clearly, this is not the case, but this image vividly portrays to the audience the extent of Desdemona’s fascination and enthralment with his stories, that she is hungry and enthusiastic to hear more.

A good metaphor used in Othello’s speech is, “Rough quarries, rocks, and hills whose heads touch heaven”. The hills did obviously not touch heaven, but Othello has used this image skilfully to illustrate just how tall they really were and call attention to the vast variety of landscape in his former homeland.

Lastly, there is evidence of irony in one of Othello’s speeches, when he is talking of the alleged witchcraft and drugs he has used in his wooing of Desdemona.

“…what drugs, what charms,

What conjuration and what mighty magic”

Othello deliberately says this to alarm others and trick them into thinking that he has actually used potions and magic in order to gain Desdemona’s affection; only to later destroy these thoughts by telling them the innocent truth. Irony is a very intelligent literary device, which confirms Othello’s eloquence in language.

In conclusion, it is apparent that Othello’s initial description of his language vastly contradicts what is subsequently displayed to the audience. His words are well-crafted, expressive and articulate. Furthermore, numerous literary devices are used in order to intensify the already beautiful language and communicate events and images in a way that captivates the audience and manipulates our opinion of him.

Would you agree that 'There is an evident contrast between Othello's description of his language and the language itself'. (2020, Jun 01). Retrieved from https://studymoose.com/agree-evident-contrast-othellos-description-language-language-new-essay 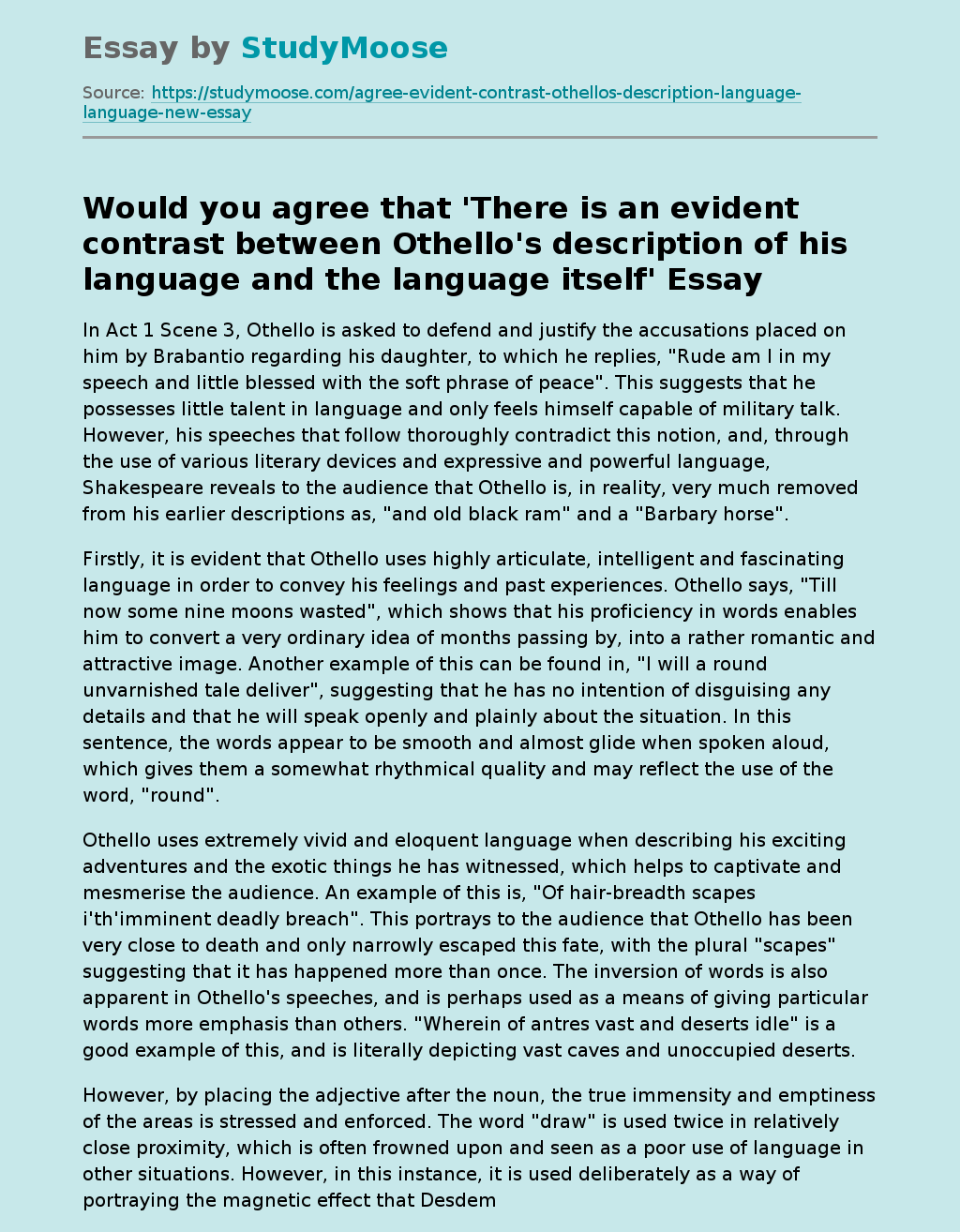