AGRA FORT Also renowned as the Red Fort of Agra, Agra Fort is located near to the Taj Mahal gardens on the banks of River Yamuna. The real specimen of architectural marvel, this fortress was constructed in the 15th century. The construction of this mammoth structure started during 1565 during the Great King Akbar and continued the developments up to the period of King Shah Jahan, the grandson of Akbar.

The fort, in a length of 2.5 km marvelous enclosure walls, is built in red sandstones and encloses many monuments which are real architectural wonders.

Don't use plagiarized sources. Get your custom essay on
“ Agra city ”
Get custom paper
NEW! smart matching with writer

Many exquisite palaces such as the Shah Jahani Mahal, Jahangiri Mahal and the Khas Mahal, and audience halls named Diwan-i-Am and the Diwan-i-Khas are enclosed in the fortress. Other monuments include the Fish Pavilion, the Nagina Masjid, Garden of Grapes and the Pearl Mosque.

FATEHPUR SIKRI Fatehpur Sikri is a town located about 40 km away from Agra and is one of the renowned World Heritage site by UNESCO.

The city was built during the period 1571 to 1585 by great Mughal emperor Akbar. The city in red sandstone was built to celebrate the birth of his son Salim and also to honor the Saint Sheikh Salim Chisti.

Fatehpur Sikri was the capital of Mughal Kingdom for few years, during which the city reached at the pinnacle of its developments. The architecture of the city is a mixture of Islamic and Hindu styles of constructions. There were places complexes and Mosque complexes in the city.

TAJ MAHAL One of the Seven wonders in the world, a must see place in India, Taj Mahal is situated majestically in Agra.

It is acclaimed as one of the three World Heritage Sites in Agra and is the living specimen of romantic love life of Shah Jahan and his favorite beautiful wife Mumtaz Mahal. Located at the bank of majestic River Yamuna, the Taj Mahal is a masterpiece of architectural design and excellence in finishing. Ustad Isa, the renowned Persian Architect, led the construction.

The most famous marble structure in Agra, in fact the most beautiful and fascinating monument all over India, completed the construction in 1653 AD. The Mughal King Sha Jahan built this as the final resting place for the queen Mumtaz. It is believed that it took nearly 22 years to complete the grandeur palace. There are 22 small domes over the Taj Mahal, denoting the 22 years and the verses of holy Koran are inscribed on the domes.

The place is one of the many tourist destinations in Agra. The place is sacred to the followers of Radha Swami faith.

The prime attraction of the region is the memorial of Swamiji Maharaj. The structure is a blend of mosque, temple and gurudwara architecture. Built in white marble the construction of the lofty structure started on 1904 A.D. and is believed never to be ended. 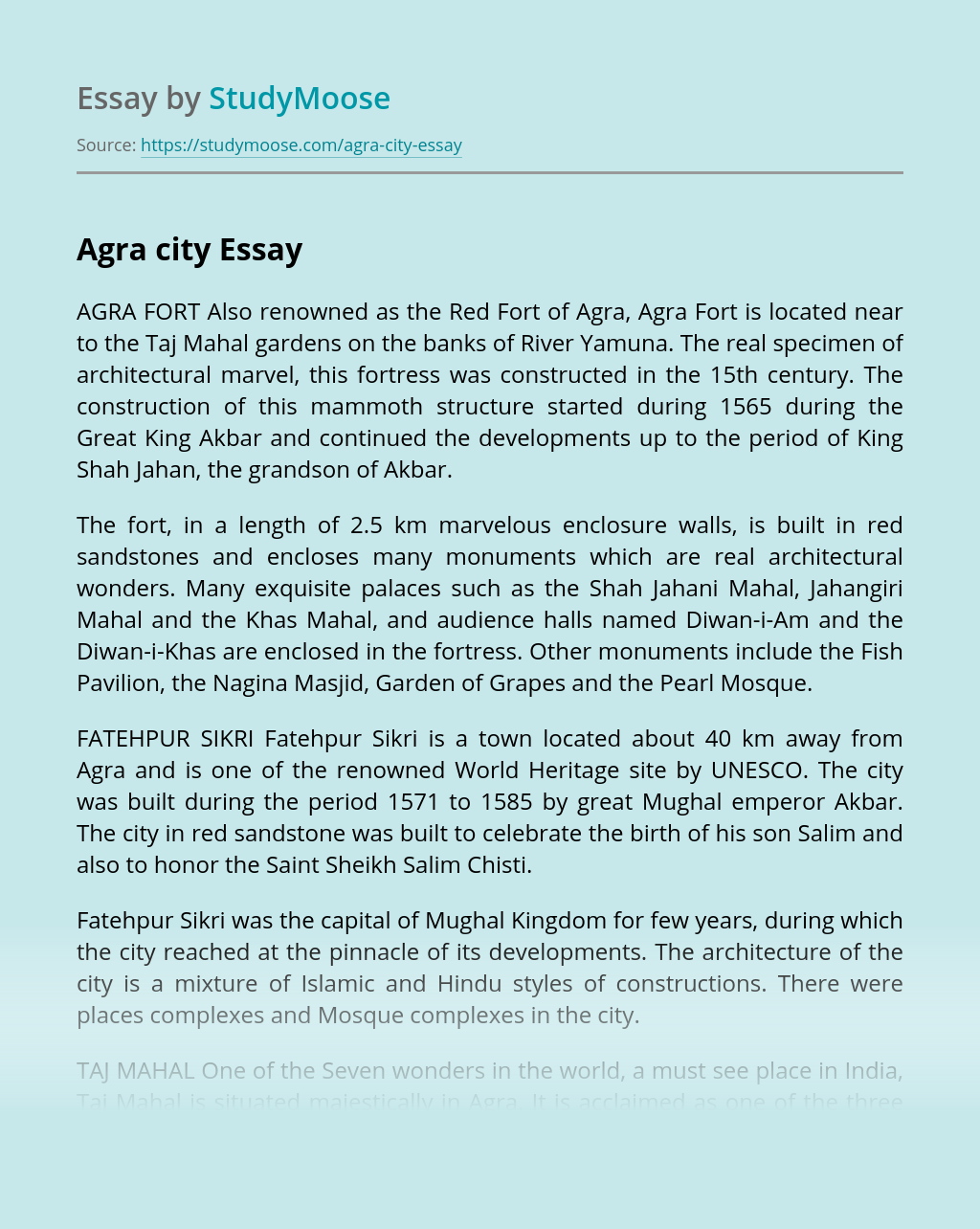