The aging process involves many changes. These changes can be difficult for some. Changes include physical and cognitive development including primary and secondary aging, intelligence and memory, health and biological factors, relationships, personality, and transition factors (grief and loss issues, and retirement). I will address the above using scholarly peer reviewed journals. A study was conducted by Khodr, B. , Howard, J. , Watson, K. , & Khalil, Z. , testing the effect of antioxidant therapy on sensory neurovascular function and tissue repair.

Both primary and secondary aging were observed.

Don't use plagiarized sources. Get your custom essay on
“ Physical and cognitive development ”
Get custom paper
NEW! smart matching with writer

Primary aging was characterized as the decline in sensory neurons (vision, touch, and hearing). Secondary was the link between the primary aging and lack in tissue repair (Effect of Short-Term and Long-Term Antioxidant Therapy on Primary and Secondary Ageing Neurovascular Processes, 2003). As an adult gets older the body’s senses and ability to repair itself diminish. The finding showed that vitamin E greatly increased sensory neurovascular function and tissue repair. This proves that nutrition can help the aging process to some extent.

Another study was conducted testing the cognitive development of adults aging between the ages of 60 and 102. The factors tested where, perceptual speed, episodic memory, semantic memory, category fluency, letter fluency, and global cognitive factor (Genetic effects on old-age cognitive functioning, 2013). The results of the study showed that memory was greatly affected, following perceptual speed and global cognitive ability being effected the least. (Genetic effects on old-age cognitive functioning, 2013). As an adult ages so does the brain.

This effects memory making it harder to retain new information and sometimes can lead to short term memory loss.

Also, motor functions slow down making it difficult to react quickly when needed. Biological and health factors were tested with the self-perceived health of old persons. Self-perceived health, functional ability, cognitive function, depression, and social participation were evaluated. The results showed that the adult’s ability to function, their depressive state, and age, directly affected how they perceived their own health.

Throughout the two years that they were studied, the elderly adults slightly changed their self-perception as their health declined. Some of the subjects also suffered from chronic conditions. In general, the subjects felt that chronic conditions were part of aging, but when the symptoms became severe, their self-perception declined. The overall cognitive and physical functioning were good and symptoms of cognitive decline and depression were little to none (Associations of psychological, functional, and biological factors with age changes in the self-perceived health of old persons, 2012).

In summary, health and biological factors are expected to decline when aging, but if the symptoms become severe this can greatly affect the personal mental and physical state. Relationships change and develop as we get older too. A study was conducted with older adults aged 55 to 85 testing their networking size, gain, or decline within a 16 year period. Results showed that as the elders got older their relationships with people and size of friends and family interacted with declined. Their level of health and increase in age directly affected the size and level of interactions.

Personality is also affected as we age. A study was conducted with elders between the ages of 60 and 86. Their level of engagement in family and community roles related to conscientiousness, agreeableness, and emotional stability were evaluated twice over a two and a half year period (Concurrent and prospective relationships between social engagement and personality traits in older adulthood, 2012). The results showed that the subjects who were socially agreeable, were more outgoing and open to meeting others.

Personality and social engagement varied over time and person-to-person. The study concluded that relationships have more meaning in later life than when younger. Also, a person’s personality can help us foresee their social engagement in later life. Another study addresses aging and personality, finding that a person’s level of openness to experience can affect their level of resilience in later life (Personality and reduced incidence of walking limitation in late life: Findings from the Health, Aging, and Body Composition study, 2012).

Transition is also a factor in aging. Grief, loss, and retirement are part of the aging process. Many elders have to deal with loss of loved ones, a spouse, losing a job and going into retirement, and transitioning into community based care. Also, transitioning from good health to poor health is also common when growing older. In a study done in Europe, a group of elderly women and men ages 50 and up were evaluated on their ability to transition to and from self-employment. As they got older, their work performance would decline causing disability status.

Out of labor force” were higher for those elders that suffered from some form of disability. Older women who developed disabilities due to aging, were less likely to stay working (Transitions to and from self-employment among older people with disabilities in Europe, 2012). The whole aging process is an enormous transition that takes getting used to. For some it’s easy and for others it’s difficult. Some seniors develop substance abuse or depression when they aren’t able to transition effectively. As stated above, aging is a process which has many aspects.

As we get older there are changes in both physical and cognitive development, health and biological factors, relationships, personality, and transitional factors. Our level of health greatly affects our mental health, relationships with others, personality, and level of resilience. As their health declines so does their willingness to socialize, which effects their personality directly. As stated above, many accept and are aware that the body goes through changes as we age, however when the state of health declines and becomes severe, this has a direct affect on all aspects of aging and the persons self-perception of aging. 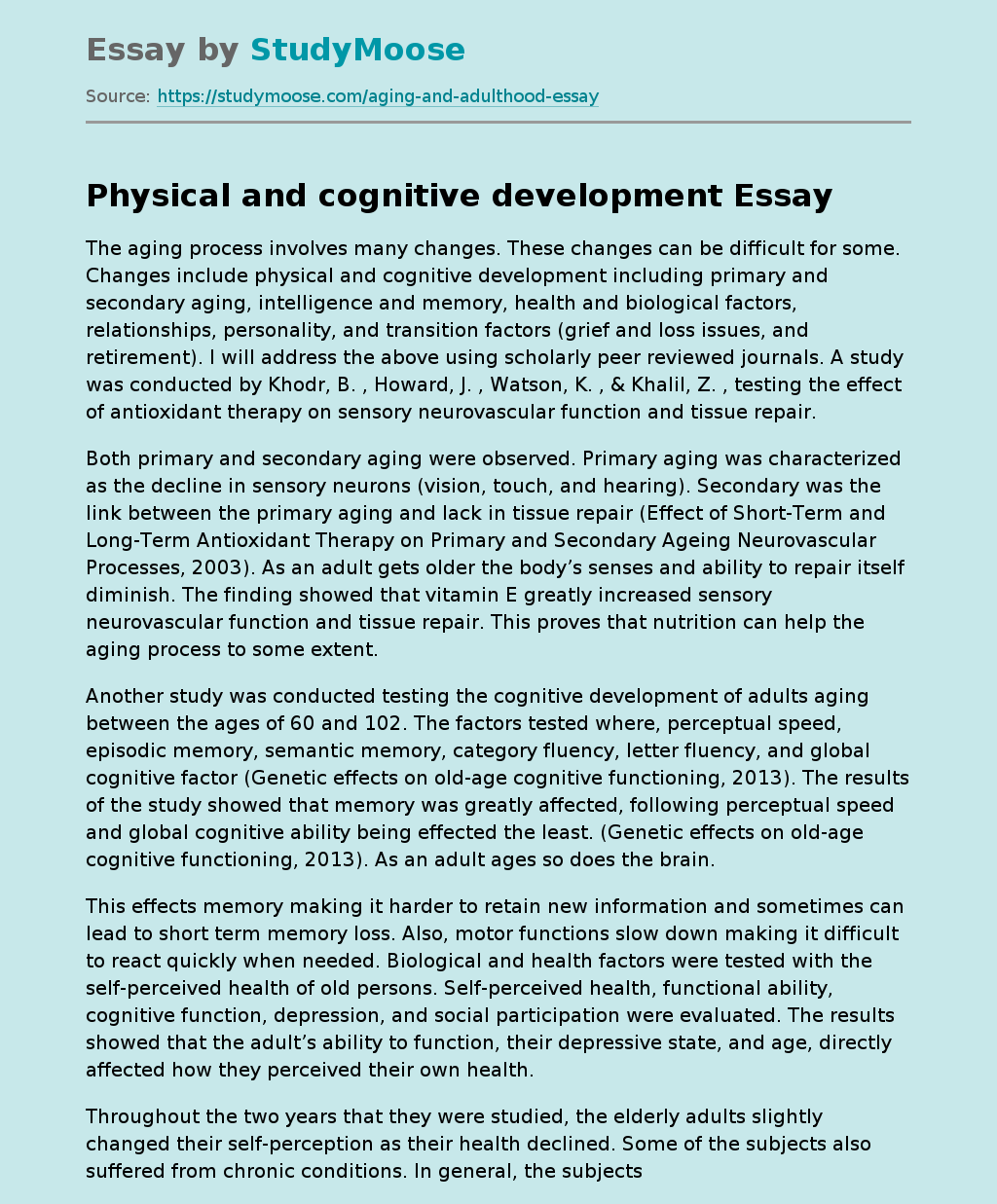