Agents of Socialization and the Influence They Had On My Life

Are we only what we learn from the agents of socialization or can we beat the odds stacked against us? The agents of socialization are some of the most influential situations that occur in our lives. They are our families our schools our peers and the mass media. Family is there to nurture the young child and provide for basic need and to teach values and beliefs. School comes along to enhance our world as we encounter those who are different then we are and where we start to learn that social attitudes and behaviors are vastly different by class and status.

Don't use plagiarized sources. Get your custom essay on
“ Agents of Socialization and the Influence They Had On My Life ”
Get custom paper
NEW! smart matching with writer

School is where we meet our peers and friendships occur, this is also I time of growth as we tend to move away from the values and beliefs of our family and start to look at the world as larger social construct. Last comes the media to imprint on our psyche what they want us to believe is the global social norm.

So who am I and how did I get here? I am a survivor of a dysfunctional family where physical and sexual abuse was normal and emotions we never to shown. I was raised by a father who due to his past and his army carrier led the home with an iron fist. My mother was an emotionless cold woman who I don’t believe know what it was to nurture a child. I was the youngest of 5 and as I would finds out later in life, a mistake according to my parents.

My sibling treated me like a second class person. I was talked over and always left to my own devices. With no real guidance, I was most time left to fend for myself. When time came to start school I was lost.

School, a place I thought I would be able to use as an escape from my family. Nothing could have been further from the truth… I, as I would learn from the other kids, came from the wrong side of the track. This was all the information they needed to bully me about every little thing possible. My clothes, my hair, my weight, and the fact I was poor and so on. Teachers even treated those of us who were socially out cast differently. 2nd grade I was mocked in front of the entire class because I was not able to read. I was put in a class for “special” kids which just made life through school very difficult. By the time Jr. High came around I was the weird loner kids that people would mock in the hallways. The bullying so bad I was taken out of school and taught at home. Of course this made it difficult to obtain any real friends.

Friends were few and far between. The ones I did have were the outcasts just like me. We were poor and from the same area. The consensus between us was to escape the reality of the world around us. One can imagine that led to a lot of drinking, drug use and sex. So throughout my teen years and early twenties my life was pretty much a drug induces come that I wasn’t able to get out of till the day I found out I was going to be mom. A couple other girls I hung out with found themselves in the boat but unlike them, who ether had abortions or gave their babies away; I let the little creature grown in me to change my life fever. Nine month later I found myself a single mom with no friends. I now face a world where being a single mom was widely look down upon.

This all bring me to today. Today I am still a single mom of 3 wonderful girls ages 21, 14 and 7. There was I time I found myself going down the road of my past. I had problem with anger and depression. But I took the steps needed to break that chain. I still suffer from PTSD and anxiety but I learned what I need to do to keep myself in the place I am in right now. I am proud to say that because of my drive to fight what these agents of sociology tried to make me I beat the odds.

Agents of Socialization and the Influence They Had On My Life. (2021, Aug 10). Retrieved from https://studymoose.com/agents-of-socialization-and-the-influence-they-had-on-my-life-are-we-example-essay 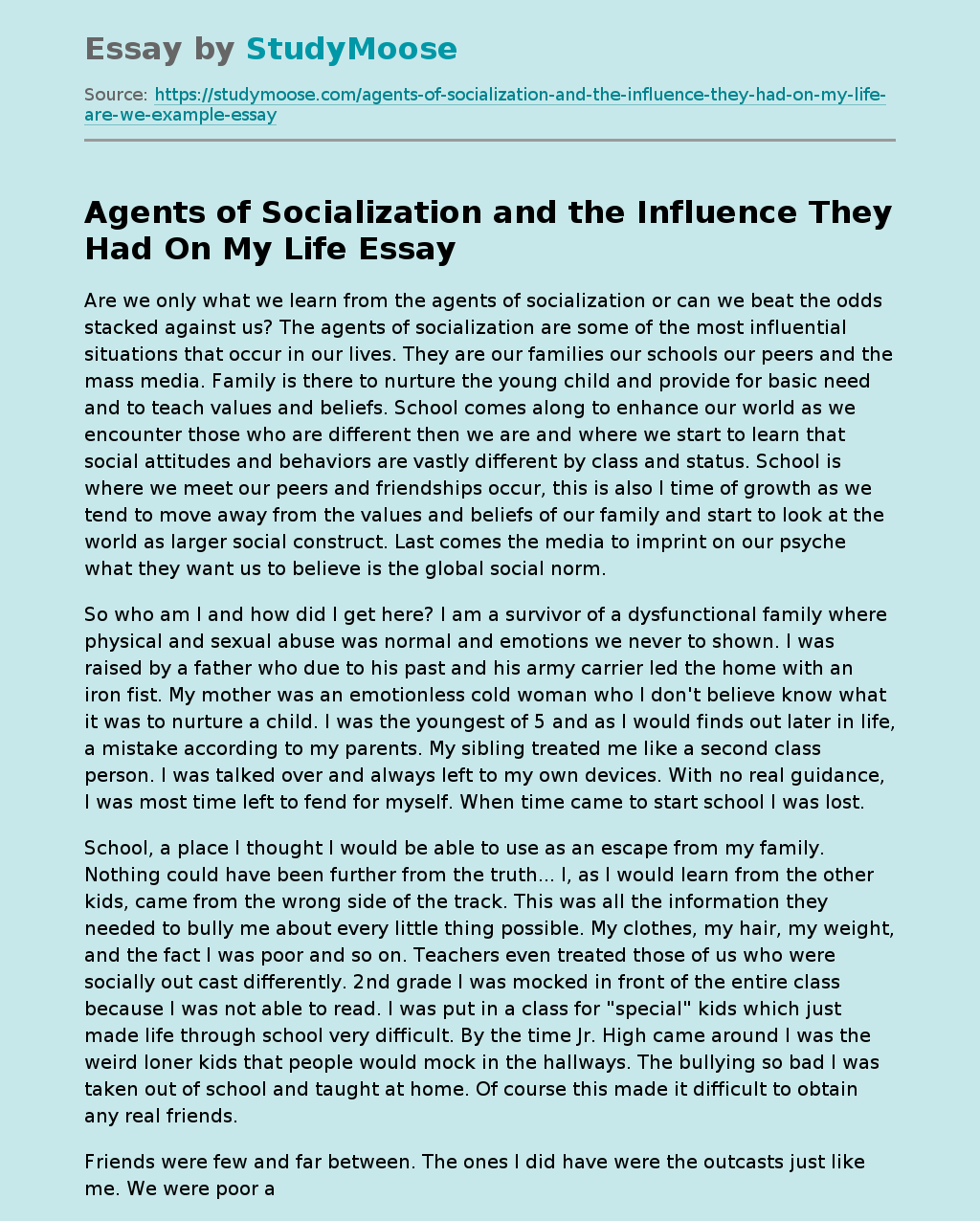