No two people exactly the same, so people develop at different rates. “The fact that every person is different and develops at his own pace doesn’t make the creation of policy any easier.

” (Greenblatt 22). It would be extremely difficult to make a solid age of responsibility since everyone is different. Any age decided upon would be unfair for some people and perfectly fine for other. There is also the fact that there is no upper limit to the age of responsibility. There are copious amounts of older people whose minds are fading; they can’t recognize it themselves and they don’t always have someone there to recognize it for them.

These people are equally if not more dangerous than someone under the age of responsibility because they are not always capable of making sound judgments and there is a strong possibility of them being under the Influence of some form of medication and/or alcohol.

It is a well-known fact that women generally mature faster than men physically, emotionally, and mentally. Does this mean that women should have a lower age of responsibility than men? No, because this fact is a general statement based on the analysis of a few individuals and couldn’t possibly represent everyone.

Some women mature slowly and some don’t mature at all, while some men mature quickly, and some mature at a normal rate. Due to the individuality of people and the many factors that affect growth and maturity there is no way to make a solid, fair age of responsibility.

The average twenty-one year old isn’t fully done growing and maturing. Research shows that the average twenty-one year old’s brain isn’t even fully developed yet. “Texas State Representative Jerry Madden says he’s sympathetic to the argument that ‘the brain isn’t fully developed until 25, and that’s when people should be allowed to do certain things.’” Doctors also say that puberty usually isn’t finished until twenty-five. Twenty-one year olds are also prone to make bad choices and still have a childish lifestyle.

I have an older cousin who just had his twenty-first birthday in July; he just sits around his mother’s house smoking marijuana and drinking with some of his older cousins and uncles who also chose to live that life. This is not any rare or special case; you can see it in almost any neighborhood: Oakland, Oak Park, and even Elk Grove which is supposedly a “better neighborhood”. The prefrontal cortex of the brain, which allows to make important executive decisions, has yet to completely develop In most people under twenty-five, ergo they are incapable of making completely logical choices, though they may seem logical at the time. The average twenty-one year old is incapable of making intelligent executive decisions, so it is completely illogical to have the age of responsibility at twenty-one years old.

Twenty-one year olds generally haven’t earned the full respect of society that comes with age. A large majority of rental car companies will not rent to people under twenty-five, or if they do then they charge them with an extra fee. The choice to not rent to people under twenty-five doesn’t go without reason, according to the Association for Safe International Road Travel, “Nearly 8,000 people are killed in crashes involving drivers ages 16-20”. Their age group is usually still learning to drive and so they make mistakes that can get themselves or others injured. Everyone deserves respect, but some people get more respect or better treatment based on their age, appearance, and personal relationships with people.

Unfortunately for people around twenty-one years old, they usually make bad first impressions on older people because of their age and appearance. A lot of twenty-one year olds are still figuring out who they are so they dress very wildly; most older people don’t consider this and treat them with less respect because of how they dress. A lot of older people also believe they are superior to the younger generations because they have more life experience and are therefore better than everyone younger than them. Younger adults haven’t under the trust of society and it’s not necessarily there fault, it’s just who they are.

The current age of responsibility, twenty-one, is a completely random number. The choice of that particular age isn’t logical or even consistent with any other milestone ages or any type of research. Twenty-one year olds aren’t trusted by society in general, they aren’t fully developed in the section of the brain where it really matters, and people don’t magically become mature at a specific age. Twenty-one is not a good age of responsibility. 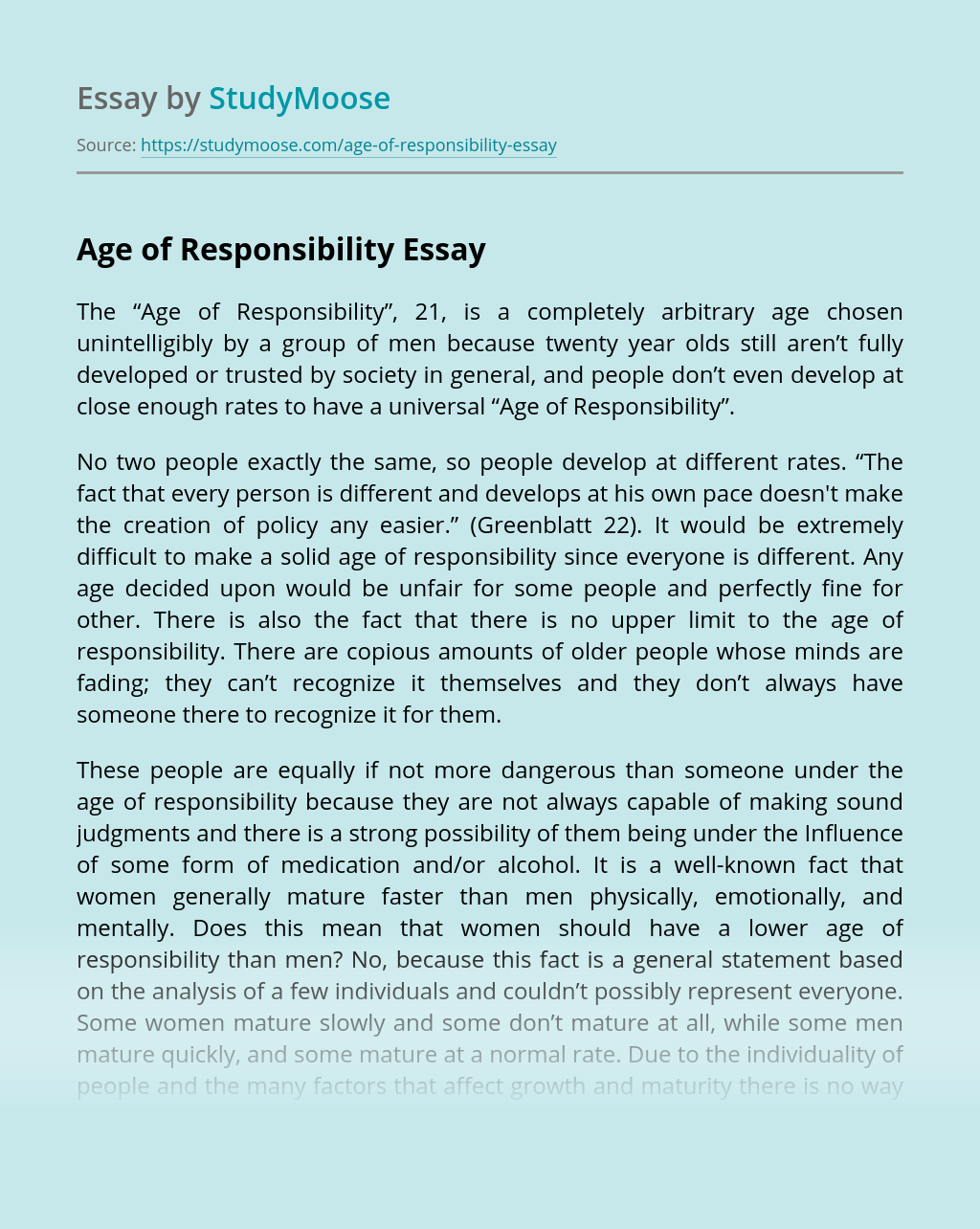 Don’t waste time
Get a verified writer to help you with Age of Responsibility
Hire verified writer
$35.80 for a 2-page paper
Stay Safe, Stay Original