Age 1392Why can't we save my village from these ruthless

“Why can’t we save my village from these ruthless bandits?” “Gothel you should understand that my Kingdom of Corona doesn’t need this useless village, and we are far better off without it,” said the king in a demanding voice. “But your majesty that’s the village I grew up in, it’s because of that village that I’m here now,” I argued back. That’s when I knew that the king had no interest to save my village, so I looked to the right and started pleading to the queen.

Don't use plagiarized sources. Get your custom essay on
“ Age 1392Why can’t we save my village from these ruthless ”
Get custom paper
NEW! smart matching with writer

“Queen, at least you can understand my reasons to save my own village, I asked. The queen got up from her throne and started walking towards me, as she got closer and closer, I could hear the sound of her crystal heels colliding with the polished tiles, when I looked up I saw the normally jolly queen with a frown on her face, that’s when I knew that I would be forced to watch the destruction of my village.

The queen approached me and spoke “Gothel, I am sorry that we can’t save your village, and I know an apology won’t make up for it, so please let me offer you gold that will last till the end of your days. This time I lost all my hope, to think that even after loyally serving the royal family for all these years would be forgotten, I got up from kneeling and turned around and slowly started walking towards the exit door, while I was walking, I could hear a slight whispering from the king and queen, I ignored it and started to focus on my way out.

After spending a couple of days in my chamber, I came up with a plan to avenge my village. That night I decided to leave Corona, as I exited from my chamber I saw two royal guards standing in front of it., I knew that the selfish king would try to punish me for my actions. Without thinking it through I stormed out from my chamber,

“Hey, you there, where do you think you’re going at this time?” Interrogated one of the guards. I stood there still, as not a single word came out from my mouth.

“ANSWER HIM WOMAN!” another guard yelled. At this point I had no choice, but to answer them.

“I’m just going out for a midnight stroll,” I answered. I doubt they bought it, but lying was my only choice. The guards started muttering to each other, so I assumed that they had forgotten about me. I left the premises.

After walking for what seemed like an eternity, I finally reached the back exit of the palace, as I walked out the door I heard the depressing cries of a young child. I walked over to where the cry was coming from and found a skinny, brown haired boy, I didn’t know whether I should help him or not, I tried to ignore him and walk away, but I suddenly remembered the daunting sight of my village getting attacked, I couldn’t resist the urge to help him, so I ran back towards the boy, as I was running, I could sense an incoming arrow so I ducked. The arrow missed my head by a hairline. Shocked, I tried to set my eyes on where the arrow was coming from, but I had to quit searching for the archer, because I needed to get the boy to safety. I approached the boy and asked quietly, “Boy, do you want to live?”

“Then please don’t make any sound, okay?” I whispered. I quickly grabbed the boy’s small hands (which were covered in tears). I tried to get cover for the boy so he wouldn’t get shot by the arrows. After searching, I found a mossy boulder he could take cover from. As I tried to make our cover less noticeable, I heard a sound of another arrow gushing through the air; it missed. Fortunately, I was lucky enough to see the trail of the arrow, as I followed the trail with my eyes. I set sight on the king holding a golden bow with crystal coverings. I thought to myself about what I had done wrong. Was trying to save one’s village from destruction such an unforgivable sin? That’s when I knew that I couldn’t let these monsters have this boy, so I made the decision to bring this boy along with me.

“Boy, what is your name?” I asked him while glaring into his glowing green eyes.

“My name is Flynn,” he replied.

“Okay Flynn, right now we must escape from these arrows, what do you say that we go on an adventure?” I questioned him. At that point, I knew Flynn didn’t live an ordinary life, because I could see his face lighten up just from the word adventure. I knew what his answer would be, so I grabbed his arm and took off into the Elven Forest.

After hours of strolling through the woods, Flynn and I successfully crossed the Elven Forest. I looked down at Flynn and saw his red exhausted face.He was way too young for this trip. The further we walked the redder his face got.

“Come on Flynn, you can do it,” I encouraged him while walking forward. But there was no reply, I quickly gazed at him and saw his red exhausted body, passed out on the leaf-filled forest ground. I sprinted towards him and tried to get him to the nearest water body. I looked around and heard the force of water clashing together; a waterfall. I hastened over there whilst carrying Flynn. I quickly tried to decrease his temperature with the water, but it wasn’t working. Just then a short, old woman with a large head, waddled towards me whilst using a stick for her balance.

“Flynn, he turned all red and hot, and his temperature wasn’t going down even when I gave him water,” I replied while panicking.

“I see,” the old woman muttered. With her walking stick, she waddled over to Flynn and grabbed his head, then let go of it and positioned her hand almost like if she was trying to kill an unlucky fly which had gotten trapped between her palms. The woman then squished her hands together, in a flash Flynn’s body turned back to its original colour, and his temperature went down to normal.

I immediately asked, “Wait, what did you do?”

“It’s simple really, the boy had stamina deficiency syndrome and I used my magic to cure it,” she replied enthusiastically. “It’s common to experience this when passing the Elven Forest.” I stood there amazed, almost as if I just saw a shooting star.

“Why the amazement? Haven’t you heard of magic? Wait are you not from here?” She questioned rapidly.

“No, Flynn and I aren’t from here, in fact we never knew magic existed,” I answered her. “Well then, I guess I must give you a proper introduction; I am Baba Yaga, the best witch in the east,” she spoke formally.

“Well, where are you adventures from?” she asked.

“Hmmm, never heard of it, anyway, would you two like to learn magic?” She questioned carelessly. I looked over at Flynn and realised how much magic could help him, I also realised how I could avenge my village if I knew magic, so I replied, “Yes, please let us be your disciples.”. Baba Yaga grinned, from her grin I knew that learning magic wouldn’t be easy at all, instead it would be hell.

Age 1392Why can't we save my village from these ruthless. (2019, Dec 08). Retrieved from https://studymoose.com/age-1392why-can-t-we-save-my-village-from-these-ruthless-example-essay 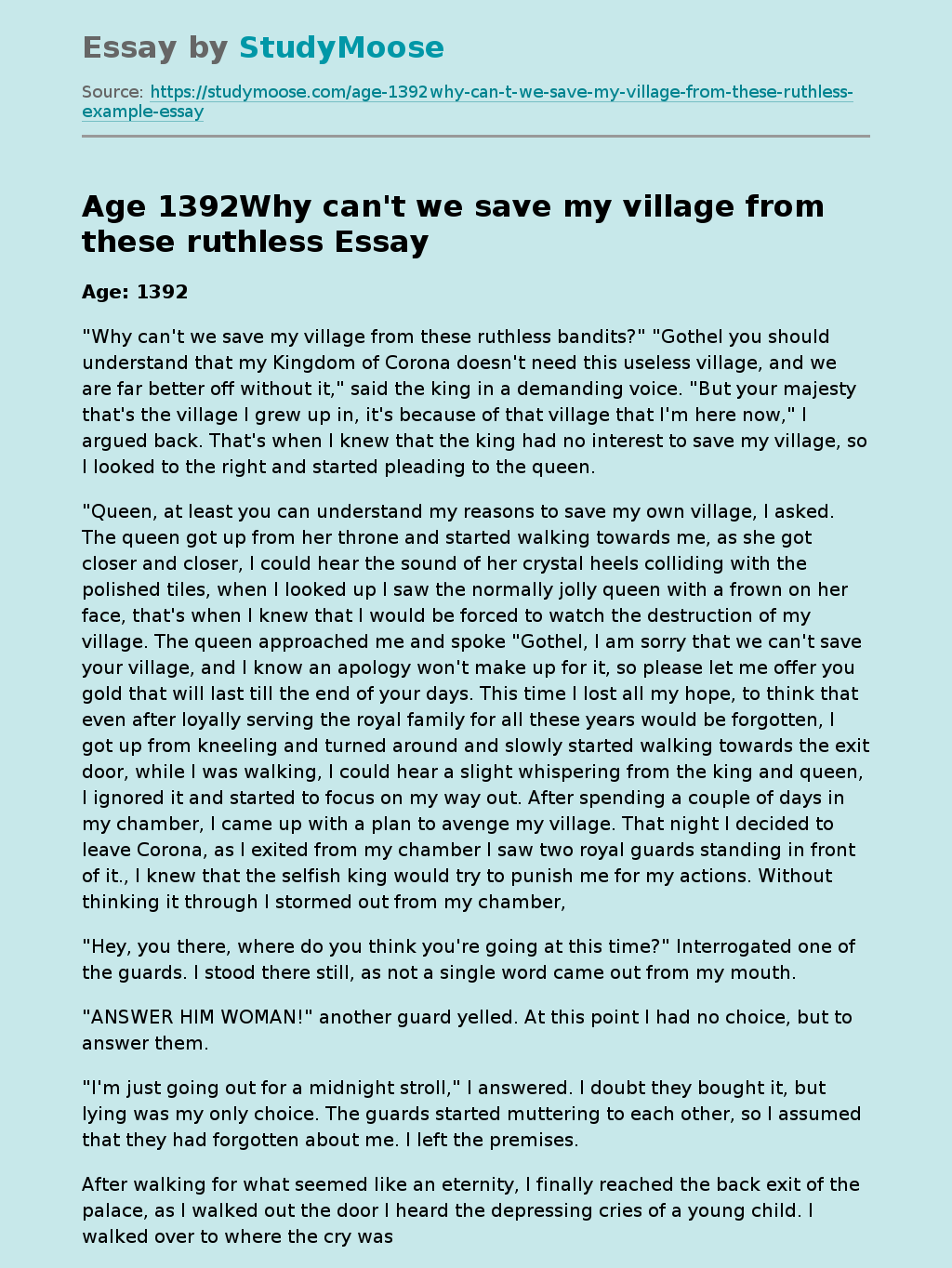