After Apple-picking by Robert Frost

In this poem, Robert Frost uses the symbol of picking apples to represent the speaker’s hard work and decisions throughout his life. In the Bible, the apple symbolizes knowledge; this analogy reinforces the knowledge gained from the speaker’s life experiences. “My long two-pointed ladder’s sticking through a tree/Toward heaven still” emphasizes that the act of picking apples can be interpreted as something related to religion. In the book of Genesis in the Bible, Eve was tempted by a snake to eat the forbidden fruit of the apple because the snake convinced her that eating it would make her more knowledgeable than God.

This story can be related to the poem because when Eve eats the apple, she can go up the “ladder to heaven” because she is “omniscient” enough to do so. A freshly picked apple could also symbolize opportunities in one’s life. In the poem, the speaker does not successfully pick all the apples, this shows that there were a lot of opportunities in his life that he never accomplished.

Towards the end of the poem, the speaker contemplates whether death is merely the state of hibernation, meaning that there is life after death or just “human sleep” where the speaker is able to wake up the next day only to find that he has to continue living his old life. In line 12: “And held against the world of hoary grass”; the word “hoary” means frosty, the poet has chosen this specific word in order to show the speaker’s pessimistic view about the world and reiterate the speaker’s contemplations about death.

The poem is not structured into any stanzas because the whole poem is one stanza. It contains forty-two lines but only fourteen sentences. If the sentences were highlighted, it would look like the steps of the ladder mentioned in the second line of the poem. These “steps” emphasize the speaker’s longing to die in order to go to heaven.

The poem has multifarious end-rhymes, but it doesn’t have a regular pattern. “I was well/Upon my way to sleep before it fell/And I could tell” is an example of some end-rhymes that allows readers to vicariously imagine an image where the speaker is drowsing off with his head slowly going down and up again. The rhyme words “well”, “fell”, and “tell” emphasizes deep sleep. There were also some assonance present in the poem: “Stem end and blossom end,” and

“Magnified apples appear and reappear”. These assonances were also used to provide readers with a drowsy feeling.

The number of syllables of each line of the poem varies from two to eleven syllables. The longer lines of the poem add to the sleepy mood of the poem but the short and abrupt lines create a sense of hesitation and the sudden awake of the speaker from his sleep. For example: “Cherish in hand, lift down, and not let fall” shows the speaker’s dreaming state of mind while “For all” emphasizes a sudden alarm for the speaker.

The overall tone of the poem is pessimistic because the speaker is upset with his failures in life and is just passively waiting for his ‘long sleep’ or death. This can be seen when the speaker was picking apples and gives up when he was unable to successfully pick all the apples. “Apples I didn’t pick upon some bough. But I am done with apple-picking now” shows that the speaker gives up his opportunities in life so easily by simply saying he’s done with “apple-picking”.

Towards the end of the poem, he sarcastically says: “Long sleep, as I describe its coming on/Or just some human sleep”. By adding “or just some” in front of “human sleep”, the speaker hints to the reader that he is sick and tired of having to wake up from his sleep to find that he has to run the same old, monotonous life that has no meaning. The speaker wants to be like the woodchuck that is able to hibernate during winter and is able to start a new life after it wakes up from hibernation. The speaker wants to have a new life and not the current one he’s leading.

The word sleep is repeated six times in the poem, to strengthen and reiterate the speaker’s feelings of drowsiness. The word “sleep” gives the strongest effect at lines 35-40. There is a rhyme between the word “Heap” in line 35 and the word “sleep” in line 38″. Another “Sleep” is repeated in the same line: “This sleep of mine, whatever sleep it is.” The last the lines of the poem: “Long sleep, as I describe its coming on/Or just some human sleep” nicely ends the poem with a sleepy tone. This ambiguous line leaves readers uncertain whether the speaker is indeed just having some “human sleep” or has already entered his “long sleep”.

“Long sleep” as mentioned above, was an euphemism for death. Frost juxtaposed the words “long sleep” and “human sleep” in order to contrast the fact that “long sleep” implies ‘life after death’ and “human sleep” implies ‘boring and old life”. The speaker is being a little sarcastic because he doesn’t even care whether he is going to die or not. He says he might go for a “long sleep” or just a normal “human sleep”. The poet raises a question to readers about whether humans know what happens after they die. Humans cannot know what comes after death; it is only through their faith in a religion that can give them a sense of where they are going after death.

After Apple-picking by Robert Frost. (2017, Nov 12). Retrieved from https://studymoose.com/after-apple-picking-by-robert-frost-essay 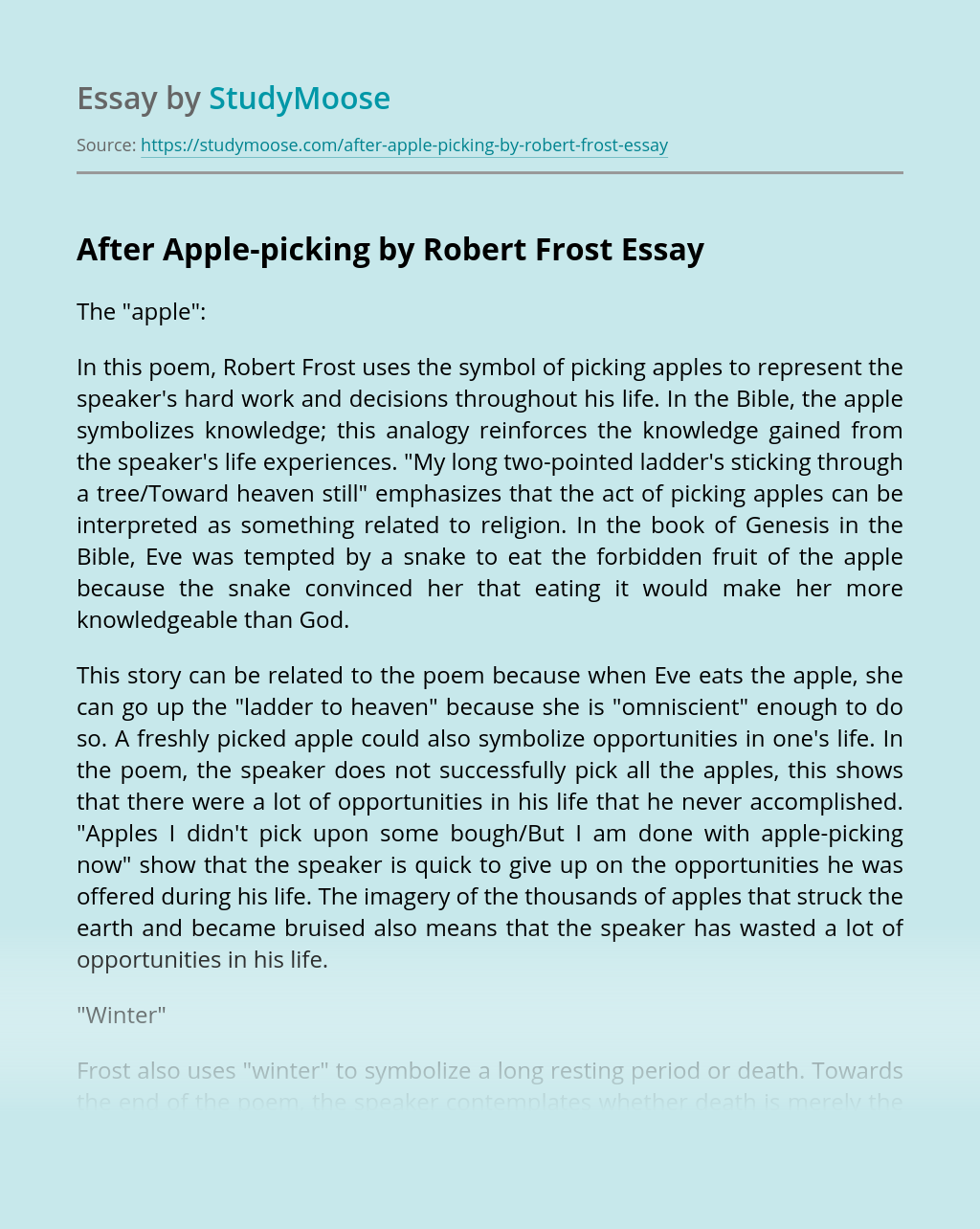 I Heard a Fly Buzz When I Died and After the Apple PIcking: An Analysis

A poet uses the elements of poetry to express his/her theme. This is particularly true in the poems I Heard a Fly Buzz When I Died by Emily Dickinson and After the Apple Picking by Robert Frost. Both poets use metaphor and rhyme scheme to accentuate the themes of these two famous poems by two...

Story of an Hour- Analysis

Extract: “When the doctors came they said she died of heart disease–of joy that kills.” Write a persuasive essay of between 500 – 700 words in response to the following question: Early in the story we learn that Mrs. Mallard is “afflicted with heart trouble,” though her unexpected reaction to her husband’s death may suggest...

Get Essay
William Stafford's poem "Traveling Through The Dark"

The speaker in the poem must reflect on what to do about the dead does, he knows that in order to keep other ppl from hitting her & getting into an accident he must push her into the canyon, but the still alive foal weighs on his conscience. The speaker has to search his mind...

Elegy Written in a Coutry Churchyard

Q1. Discuss Gray as a transitional poet with special reference to ‘Elegy Written in a Country Churchyard’. The period 1730-1770 marks the beginning from a movement from one distinct phase of English poetry towards another .The poets were getting gradually exhausted with the neoclassical ethics of clarity, reason, sophistication, and etiquette, its economic wording, ,rationale...

Analysis of the Poem: The Darkling Thrush

Speaker: The speaker in the first two stanzas is portrayed as pessimistic and dark, but this changed in the two last stanzas. In any case, the speaker is conveyed to have strong feelings for nature. Form: Rhyming scheme is clearly visible giving to poem a rhythm. The 3rd stanza’s rhyming scheme seems to have been...

Personal experience in the war in Counter- Attack

By considering one of the poems that you have read, explain how the poet presents their view of the conflict – ‘Counter-Attack’ Siegfried Sassoon presents his personal experience in the war in ‘Counter- Attack’ with raw brutal imagery of the battlefield, the numerous sensory feelings provoking terror and outrage at the war, coupled with the...

Emily Bronte spends last days of her life at home. She didn’t have any outdoor activities. Her life was full of miseries and gloomy incidents. There Is not any light of hope and couragment In her life. She was fed up with her life. She wrote this poem In those days when she was bound...

Laurence Binyon's Poetry For the Fallen

Laurence Binyon wrote one of the best known and most frequently recited verses of the First World War. Across the world, and particularly the Commonwealth, the central stanza of his poem For the Fallen is regularly used to proclaim and affirm the resolve of nations and communities neither to forget nor overlook the effort and...