African Traditional Religion with Regard to Christianity

Africa is the world’s second largest and second most populous continent. According to Sunday M., a scholar in the field of anthropology, Africa is the home to more than 3,000 varying ethnic groups, with the sound of over 2,100 different languages echoing across the continent (Moulton, 2017). The people groups of Africa practice a diverse range of religions, such as Christianity, Islam, Judaism, Hinduism, and the traditional religions specific to their ethnic groups.

This essay will therefore be focussing specifically on the African Traditional Religion with regard to Christianity in Africa.

Don't use plagiarized sources. Get your custom essay on
“ African Traditional Religion with Regard to Christianity ”
Get custom paper
NEW! smart matching with writer

The aim is to discuss and answer the following questions. What does the African Traditional Religion (ATR) entail? How then does one explain the Gospel to a follower of ATR? Is it possible for African Christians to practice both ATR and Christianity simultaneously? Should ATR be separated from Christianity?

This diverse religion (ATR) can be regarded as ‘traditional’, as it ultimately finds its roots in Africa, and still exists today primarily through the sharing of it, via word of mouth, over generations.

As mentioned previously in the introduction, when thinking about the African Traditional Religion, it is vital to take into consideration the size of Africa, with its multitude of cultures, beliefs, and people groups – which, might I add in agreement with Idowu, have all experienced at least some degree of racial, social and spiritual influences from Western powers and each other alike (1991, p. 103). Therefore, with this observation in mind, we can establish that when referring to the ATR, this essay is not discussing one uniform religion which spans across the continent, but rather a diverse religion, which looks slightly different to each individual people group and/or tribe across Africa, yet shares common and general main beliefs.

This shared thread applies to how ATR practicing people view god (note – this ‘god’ does not refer to the God of the Bible). An accurate term coined by E. Bolaji Idowu, to describe the ATR beliefs, is “diffused monotheism”. This term describes a belief in a sole god with which other powers (good and evil) coexist beneath. This idea of diffused monotheism, however, establishes many spiritual dangers which could possibly pose a threat to the welfare of ATR believers. Therefore, they tend to regard the good divine power as a means of protection and salvation from hostile spiritual forces and to improve their personal wellbeing (Arnett & Arnett, 2017). It is evident that there is an accepted concept of god’s character throughout Africa – god is seen as a living, creating, supreme deity (Olowola, 1993, pp. 12-13). The ATR believers see their god as omniscient (knowing all things), omnipresent (always present, everywhere) and omnipotent (all-powerful) – these characteristics are similar (note – the use of the word ‘similar’, and not the ‘same’) to the features Christians associate with the true triune God of the Bible – this is supported by Colossians 1:15-18, “The Son is the image of the invisible God, the firstborn over all creation. For in him all things were created: things in heaven and on earth, visible and invisible, whether thrones or powers or rulers or authorities all things have been created through him and for him. He is before all things, and in him all things hold together. And he is the head of the body, the church he is the beginning and the firstborn from among the dead, so that in everything he might have the supremacy.”

Having looked at what the ATR belief-system entails, the observation that can be made is that an ATR person would be more open to engage in spiritual conversations. Therefore, if one is trying to share the Gospel with someone who identifies with ATR, there are different avenues one could take. Firstly, since ATR believers place a lot of emphasis of their personal wellbeing and safety, it could be wise to focus on how God provides for our deepest and most desperate need, which is our salvation from sin. By opening this avenue, one could dive further into the nature of sin and the seriousness of it, as it is a complete rebellion against God, which has been passed on from generation to generation. ATR believers are not foreign to the idea of sacrifices being made to put an end to curses, therefore, it can be helpful to show how Jesus Christ is the ultimate sacrifice, who rescues us completely from the stranglehold of the curse of sin. When sharing the Gospel to a member of ATR, it is of the essence, to emphasize grace above own works. In the African Traditional Religion, we see that there is an idea of following and performing certain rituals in order to gain favour amongst the spiritual beings, therefore, one must rather show that it is solely out of God’s great love for us, by His sovereign grace, that He sent His perfect and Holy Son to save us from our sins – there is nothing we can do to qualify or rescue ourselves. Looking at the ATR worldview in comparison with the Biblical worldview, there are evident similarities. The ATR follower holds beliefs in god, divine powers, miracles, and god’s intervention in the world. When sharing the Gospel, we need not convince them of these things. But rather introduce them to Christ, through whose Spirit there will be a complete transformation in their way of thinking. A total renewal of the mind, rooted firmly in Christ as we are encouraged to live in Romans 12:2 “Do not be conformed to this world, but be transformed by the renewal of your mind, that by testing you may discern what is the will of God, what is good and acceptable and perfect.

Now, to address the issue of whether African Christians can practice both ATR and Christianity simultaneously? Although many African Christians may be tempted to follow their elders in the ATR, with sentiments such as there being various avenues to reach the Supreme Being, through ancestors, divinities and spirits – ultimately we are told very clearly in Scripture (the Bible) – that there is no other way to approach God, but through Jesus Christ. John 14:6 supports this, “Jesus said: ‘I am the way, the truth and the life no one comes to the Father but through Me”. Therefore, any form of worship, no matter whether it is found to be organised and/or traditional, must first be looked at through the lens of the Word of God (the Bible) and specifically through Jesus Christ. And therefore, since the ATR beliefs do not acknowledge Jesus Christ as our only true saviour, and this being the very basis of Christianity, African Christians cannot practice both ATR and Christianity simultaneously.

In conclusion, this essay has therefore focussed specifically on the African Traditional Religion with regard to Christianity in Africa. Achieving the aim of discussing and answering the following questions. What African Traditional Religion (ATR) entails – specifically looking at their concept of god and the nature of the ATR belief system. How one is to explain the Gospel to a follower of ATR – by telling them more about Jesus Christ and how He is the only perfect sacrifice who can rescue us from the curse of sin. Discussing why it is not possible for African Christians to practice both ATR and Christianity simultaneously – since Jesus Christ is the only way through which we can enter a personal relationship with the living and true God, and therefore this implies that ATR (which includes the worship of many gods) cannot be practiced simultaneously with Christianity. Should ATR be separated from Christianity – as separate religions, yes, they should be separated. This essay has successfully completed a thorough discussion on the African Traditional Religion.

African Traditional Religion with Regard to Christianity. (2021, Feb 10). Retrieved from https://studymoose.com/african-traditional-religion-with-regard-to-christianity-essay 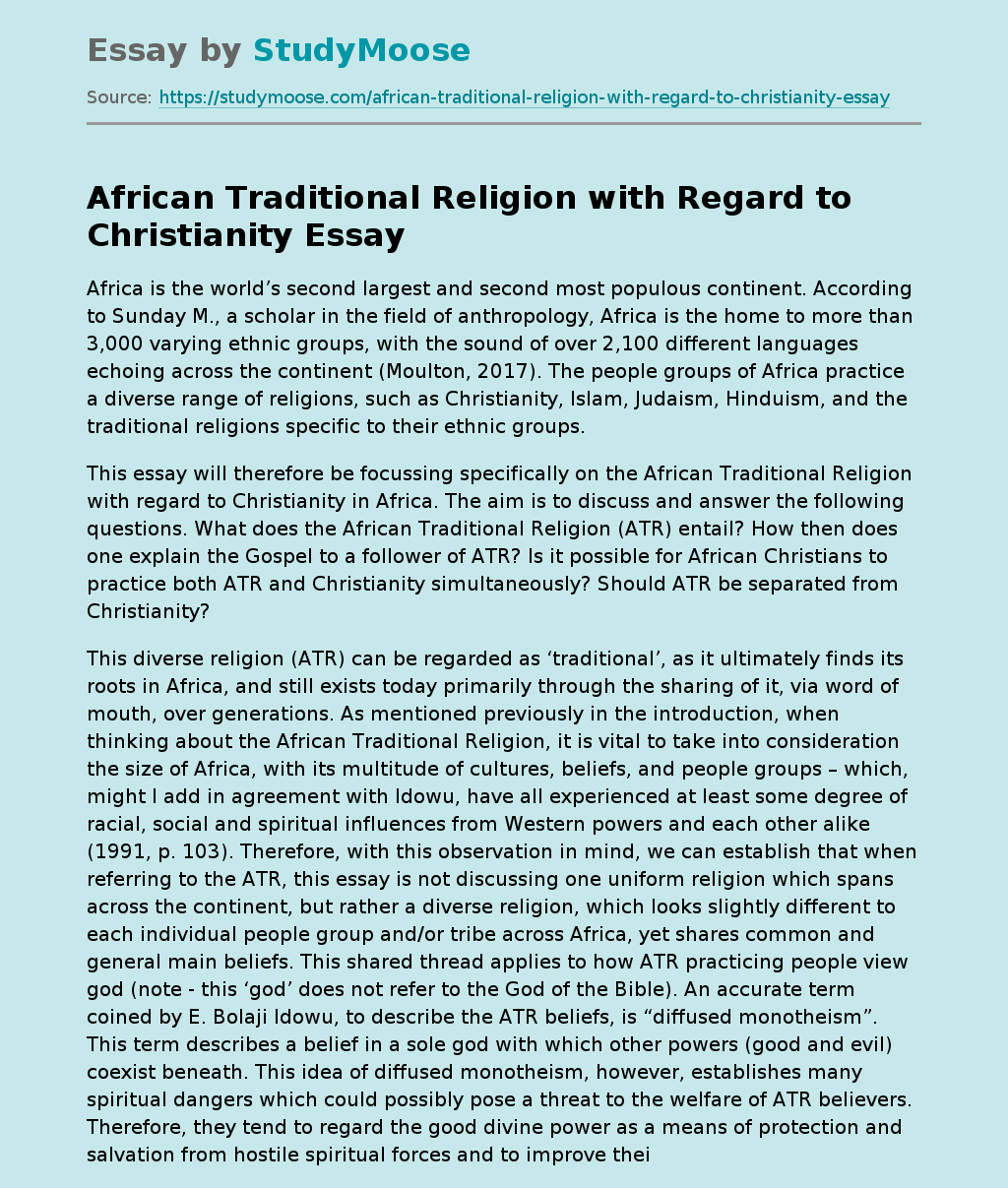