In my research, to understand how we undertake the study of the African experience you have to start in the beginning of time which dates back hundreds of thousands years ago and go into one of the first civilizations known as ancient Egypt. Understanding where the people come from and where they are at today does not even cover a quarter of understanding the true African experience.

To understand truly how to undertake the African experience you must understand the social structure, governance, ways of knowing, science and technology, movement and memory, and cultural meaning (The six conceptual categories).

With these concepts you understand that in a cosmograph known as the circle of life, there is a cycle that is always repeated: birth, the peek of life, death, the peek of death and rebirth. “Anything above the line is alive, anything below the line is dead.” The experience is continued all the way from beginning to the current time and you have to know all the stages to fully understand the true African experience.

For my critical review of scholarship I will talk about my current favorite book, “Something Torn and New, African Renaissance,” by Nguigi Wa Thiong’o. I will use class discussion and the book to undertake the African experience. A scholar by the name of Dr. Carr said, “Dr. King talked about non-violence. Obama just passed gun laws while kissing babies. So you can say we are making a step towards fulfilling our goals but we are not there yet.

Slavery is not the beginning of what is known of as Africa, which tends to be what all people think the African experience is. The syllabus states, “Well over half of the human development took place exclusively in Africa. Studying Africana therefore requires long-view historical markers derived from intra and extra African conceptual tools.” So I will start my essay before what we know as the modern world. According to the African Genealogy Africans moved to the Nile and other parts of Africa around 12,000 years ago. Homo sapiens dating back to over 200,000 years ago were the first remains of human kind discovered in Africa.

This shows that civilization started in Africa. As much as Europeans try and take everything from us Africans and rewrite our history as far as the Christopher Columbus era, it does not matter because artifacts shows that everything was started in Africa. We use ways of knowing to prove that between the bones found in Africa there was civilization in ancient Africa. “Experiential Kin is when you grow up with someone, even though your not blood family that’s your cousin. You don’t have aunts or uncles like in America. You have the nucleus family then the extended family.” This is the reason villages were so important in the uprising of Africa.

In discussion, before the Romans and Greeks had the idea of conquering the world, there were ancient Egyptians. Consisting of nobles, scribes, farmers, and craftsman, Egyptians created time through sundials, books through scribes, language through hieroglyphics, crops through farmers, art through craftsman. In addition, temples were built on with their own backs and hands, which is something that no man today, would be able to accomplish. The era of technology seemed to have just recently surpassed the dedication and hard work of the ancient people.

As we fast forward in time we go back to the Christopher Columbus era. Europeans came to Africa and their mission was to erase all of the knowledge and power we had before their arrival. They tried to brainwash the people to make it seem as if they were the first people to discover the new world. And in all actuality the new world was already known. You cant discover something if it has been discovered already. Thiong’o states “Columbus goes west across the Atlantic and, despite finding people inhabiting the lands, he calls the region he finds the New Hispaniola. Later the whole land mass is named America after Amerigo Vespucci.” With the discovery of America, started the beginning of trade routes of Africa.

When I think of dismemberment I think of the scene in the movie Gladiator where the warrior had two horse carriages attached to his arms then the carriages sped in opposite directions leaving the man dead with no arms. Thiong’o used dismemberment in a context that made me look at the word in not only literally but also figuratively. He said “the result was an additional dismemberment of the Diaspora African, who was now separated not only from his continent and his labor but also from his very sovereign being.” 4 This shows the movement and memory of the African people at this time. They had their land mind stripped from right in front of them to become slaves on another land. America is a curse and a blessing. It’s a blessing because we are one of the wealthiest and most powerful countries in the world. The curse is that we are known as the free world but only free to remember all the pain our people had to suffer to get here and fight for our rights.

This topic is so controversial that it’s hard to cover everything in only three pages especially when you start with ancient civilization. My only question is will the African People ever recover from the hardships faced from around the world? Poverty is everywhere in Africa and it seems as if it will never change. Hopefully in my lifetime I will see the change and we can go back to being the dominant people that we once was before everything was taken from us. 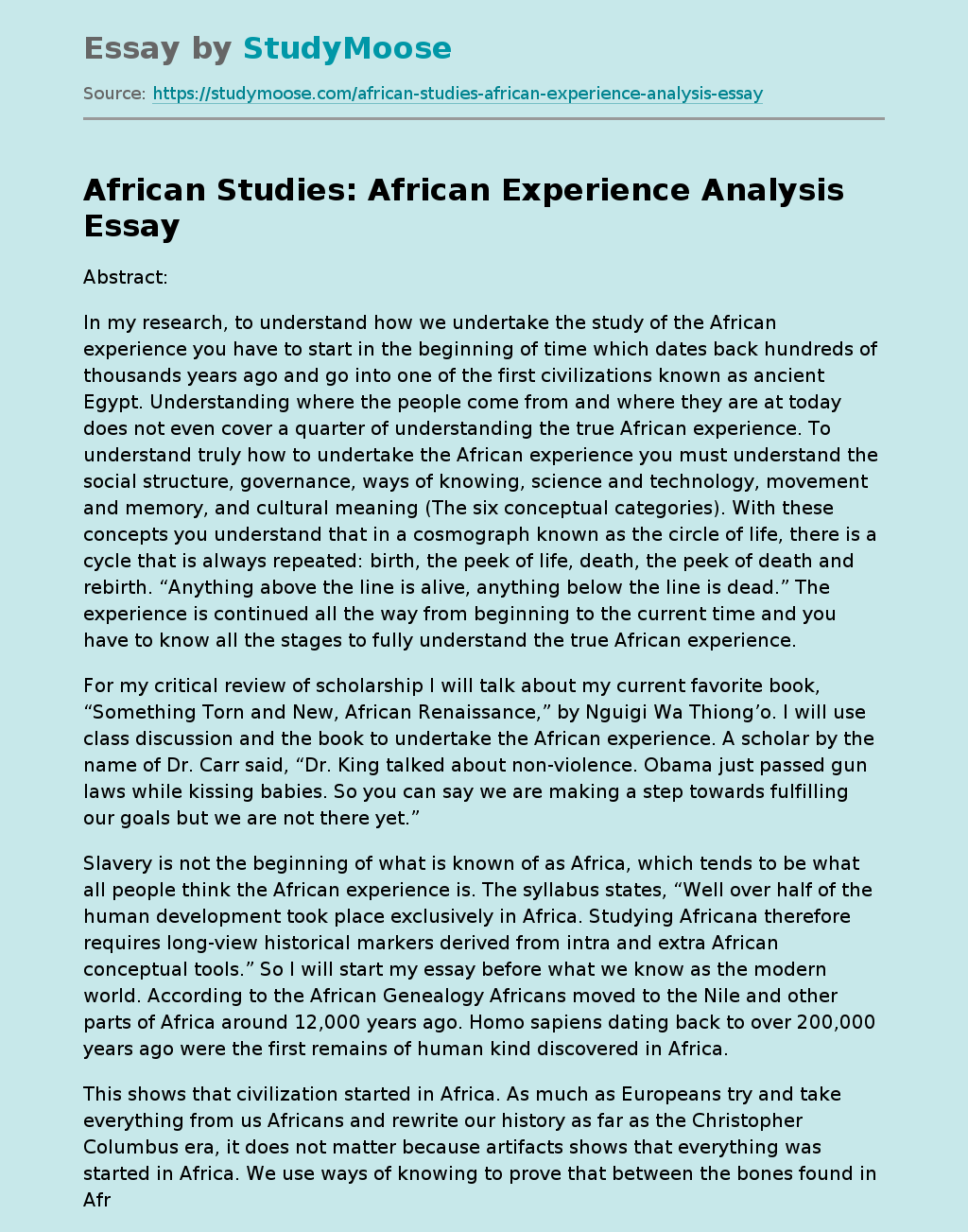