Industrialization stirred ambition in many European nations they wanted more resources to fuel their industrial production. They compete for new market for their goods .they looked to Africa as a source of the raw material and as well as market for their goods. However European had earlier establish contact with Africa as early as the 1450s, they actually controlled very little land. Powerful African armies were able to keep the European out of most of Africa for four centuries.it was gathered that the first explorer of Africa were the Portuguese in the 15th century, at that time the gap between the European and the African in term of development was not much.

Thus four centuries had marked a significant change in term of development in Europe which Africa cannot match. That prompts the European occupation of Africa.

The essence of the conference as it were was to laydown rules of the game, the do and don’ts of European occupation interest in Africa which were later articulated.

However in achieving total occupation of Africa the Europeans used diplomacy or military invasion or both in achieving their aim. Every nooks and cranny of Africa followed in most cases by military invasions, conquest, and occupation by armies of varying sizes and discipline. The period from 1800-1900 marked the highest level of European conquest and occupation of Africa. During these time all African had same objective that is defending their sovereignty and traditional way of life, it is the strategies that varies. Three options were opened to African, that of confrontation, that of alliance and that of acquiescence (accept without protest) or submission. The strategy of pg. 1 confrontation involved open warfare, sieges, and guerrilla tactics, scorched earth policies as well as diplomacy.

However various rulers choose method that suited them their understanding, the likes of the Asante’s who choose confrontation as a resistance against the European after many years of resistance fell in 1896 when the British army raided the then Asantehene Agyeman Prempeh 1 of the Asante empire capturing him along with his loyal chiefs and as well as his mother ,who were sent on exile first to sierra Leon and later to Seychelles .Another prominent African ruler who successfully resist European rule was Emperor Menenelik 11 of Ethiopia used what I described as alliance and pretence, through these he gain the trust of the Italian, reached an agreement them to sign the treaty of Occiat. History has it that there were two version of the treaty one in Italian and the other one in Amharic; both treaties were different in content. Emperor Menenelik 11 of Ethiopia was wise to have signed the in his language. After the signing of the treaty Italian declared themselves as the representative of Ethiopian on foreign affairs, Emperor Menenelik 11 of Ethiopia knowing exactly what he signed sent a circular letter to Italy and the European power stating his case.

Before Italian could realized they have been cheated it’s already too late. They invaded Ethiopia in 1986 only to have lost to a tactically and wellarmed army powered by the Italian themselves. This shame of these defeat lead to Italian invasion of Ethiopia by Benito Mussolini’s in1936. Elsewhere, when the French attacked Ouagadougou the deposed Mogbo of Naba, Wobogo made sacrifice to the earth shrine, tradition has it that he sacrificed a black cock, a black donkey and a black slave on a large hill near the Volta river beseeching the earth goddess to drove the French away and to destroy the traitor Mazi who they had placed on the throne.

In the aftermath of the European conquest, Africa resisted European occupation of Africa from the Asante, the Ethiopians and the Mossi of Ouagadougou each ruler choose different approach to resistance. In which that of Menelik11 was the most successful.it could be noted that lack of common front lead to the fruitless, unrewarding effort against the European conquest. Thurs the great Egyptian empire as they were, the Asante empire,the Somoury Toure of Senegambia, the Ethiopian and the Zulu empire could have fought together to resist the European on common front of which would pg. 2 have been successful. In spite of this the various African communities were facing vast tussle for empire from their neighbours even when one calls for help the other saw that as a means to acquire more empire.

However territorial conflict triggered the ineffectiveness of the resistance, the British used the conflict between the Fante and the Asante to declare Asante a savage land, thereby acquiring both at the long run. However it could be noted that African lacks courage and military science compared to their European counterpart. African is at heavy disadvantages in the face of the invaders. During the scramble for African the European had advanced military power compared to that of Africa, Africa could not defend against the canon and the Maxim gun when African were still using old ways of combat that involve bow, arrow, spear and machete.

Moreover the European used vast experience they acquired from their long history of colonial rule and exploitation around the world in fact by 1885weatern European had already mastered the art of divide, conquer and rule having skilled over four centuries of imperialism and exploitation in America, Asia and the pacific.

Nonetheless African resistance not be said to be fruitless effort but a partly won battle which at an enormous degree of experience. The resistance gave birth to nationalism, in fact by 1935 when the Italian conquered Ethiopia under the rule of Benito Mussolini, Africans were united on the need to wrestle back Ethiopia from the Italian by mean means of radical nationalist movement in Africa. Other African countries had looked upon Ethiopia as a source of hope. Its long history and culture were impressive. Its independent was used to prove the ability of African to conduct their affair. African nationalist and pan Africanist everywhere were united in their condemnation of colonial and their resolve to seek all possible means to end it. I will conclude ‘A lesson well learnt’ the African resistance to colonial rule. 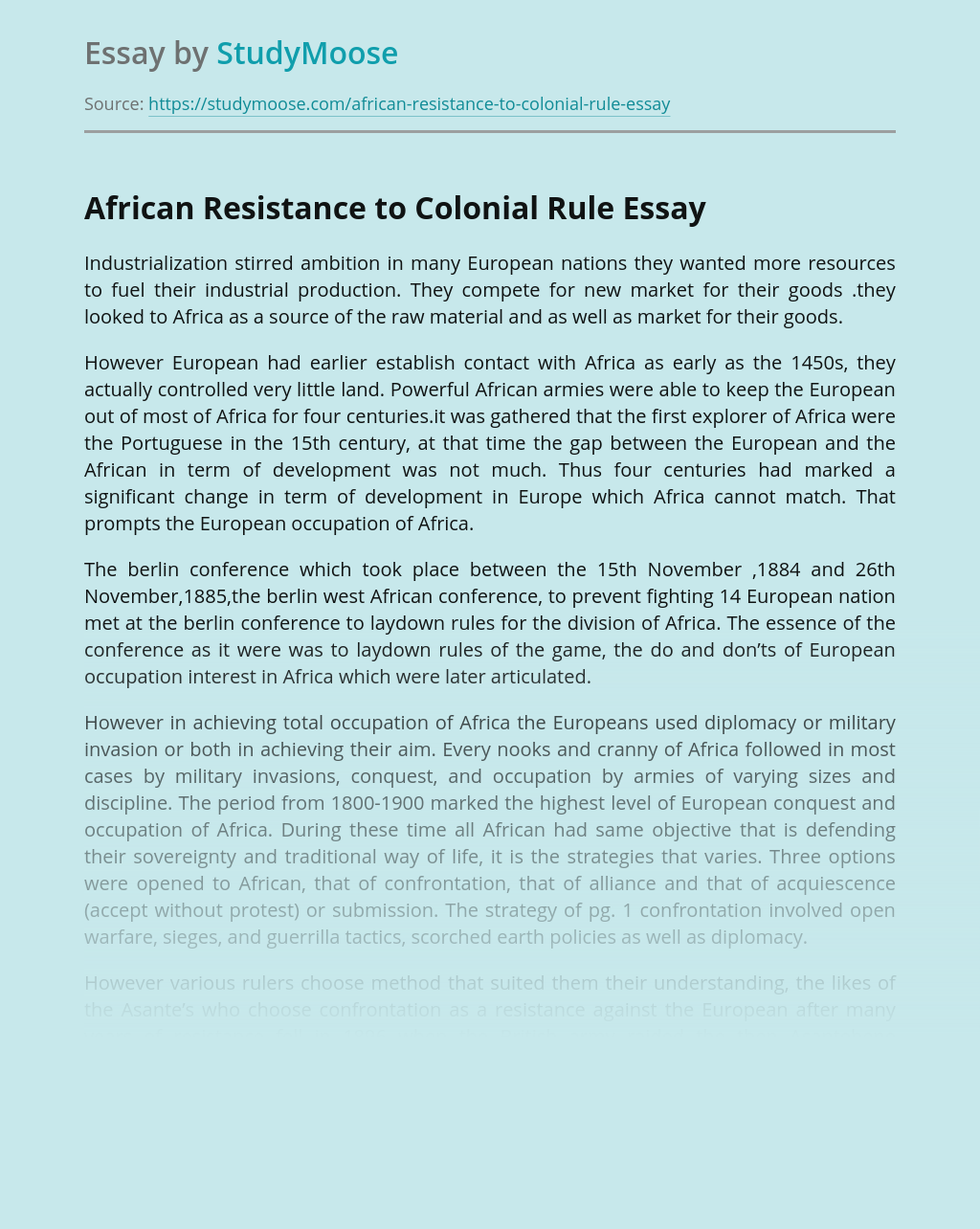 Don’t waste time
Get a verified writer to help you with African Resistance to Colonization
Hire verified writer
$35.80 for a 2-page paper
Stay Safe, Stay Original