In the story Everyday use by Alice Walker, as narrated by an African American woman who is in the midst of making a decision as to whom she perceived deserving of a very important heirloom that signifies their family’s heritage. Her two daughters have no comparable qualities. Her oldest daughter Dee, who now preferred to be called “Wangero Leewanika Kemanjo” is an educated, confident and ambitious woman who now lives in the city. Her coming home was a surprised visit for Mama.

Don't use plagiarized sources. Get your custom essay on
“ African-American Heritage ”
Get custom paper
NEW! smart matching with writer

Her real intention was to collect objects showing cultural significance. The churn and the quilts are the two particular objects she intends to possess.

The churn was the first one she showed interest on. Then she picked up the quilts which were supposedly be given to Maggie on her wedding day. Dee feels that she deserves to be given the quilts because of her passion to collect important objects that symbolizes African Culture. She would use those items to display her heritage.

Maggie her younger sister on the other hand, is more like her mother. She is a shy and awkward girl, a person of low self-esteem. Upon astute of Dee’s determination to acquire the quilt, she readily gave in. Instead of arguing she easily relinquished her right over the heirloom which

was originally promised to her by mother. Expectedly, Maggie blurted that Dee can have the quilts because she can always whole- heartedly remember Grandma Dee and her whole family history even without the quilts to remind her.

The words of her younger daughter taunted her to arrive in the decision to deny Dee of her desire for the quilts. “For Dee, the quilts and her ability to use them for decoration rather than for warmth represent her emancipation. ”1 Mama thought that Maggie as the rightful heir of the quilts, the very important object symbolizing their family traditions will be in good hands.

Mama did not decide based on the appearance and personality of her two daughters. Instead she valued the fact that Maggie showed authentic concern and worth on the significant family artifact. Maggie values the quilt for their sentimental reasons and the purpose it serves. Dee values it because she sees it as a priceless object. The two sisters both gave importance to the quilts as part of their heritage but with different perspective. Maggie believes that heritage is about family traditions that is supposed to be cherished and passed on to generations, while Dee believes that heritage is about African Culture.

OVERVIEW OF “MULATTO” BY LANGSTON HUGHES

The play Mulatto by Langston Hughes is a story about a racial-driven conflict arising in a family in South America. With an African mother Cora and a rich American father who owns a plantation Thomas Norwood, Robert and his other siblings; Sallie and William were unfortunately raised in a family where racism is an issue. Amongst his children, Robert is the one whom Thomas said brought many frustrations and embarrassment to his name. Their conflict started back when Robert was still small, he accidentally referred to his father “Papa” in front of the older man’s distinguished white guests.

Robert got whipped but the pain it caused him was more on emotion rather than physical. Robert was Thomas’ favorite up until that time. resentment had grown on both sides. Thomas, despite his ability and willingness to provide them with everything that his children deserve was not a typical father one can be proud of. He was given high regards by his children, but it was not love but fear that drove his children to obey him. Even though Thomas thought that he has 1 “Identity Confusion in Alice Walker’s Everyday Use” everything under control he did not realized that behind his back some of his children are disobeying him. Sallie for instance is studying typewriting and aims to become a teacher contrary to what Thomas knew that she is learning cooking and sewing. Robert through his education learned that equality with whites can be achieved and it should start it in his own town in this plantation and with his father. His father has sent him to school but only to be sent back to plantation to do work in the hills of cottons.

So Thomas is not doing his children a favor by sending them off to school because at the end of the day they are expected to be back in the plantation to do the dirty work. and as what Robert sees it as “become servant of the whites”. A stereotyped role of an African-America, a second class citizen. As the play continuous, Robert as foreseen by his father and some of his white friends was slowly destroying Thomas’ reputation in the white community. His brash behavior and aggressiveness in pointing out his view regarding racial discrimination is threatening. Robert believes that being African-American they should be treated fairly and with equality. That being black they are yet as good as the whites.

The manner of their father’s treatment to be them should be corrected. He thought that Thomas should acknowledge them as their children regardless of the fact that they were born from an African mother. One confrontation between Robert and his father ended in a tragedy. Thomas’ children were never allowed to use the front door but Robert refuses to do such, he walked thru the front door and almost bump into his father. Thomas was shocked and pointed his cane towards Robert, grabs a pistol and pointed it to him.

Later in the evening the father and the son had a heated argument about the latter’s undesirable behavior and disobedience on Thomas’ orders. The argument went on to the father pointing the pistol to his son, he was disarmed and was choked to death by his own blood. His mother upon seeing the situation frantically showed sign of insanity. Robert after being seized by a mob ran back to his room and ended his life with his own hands rather than be captured and killed by the mob. The story ended tragically.

Everyday use and Mulatto are two stories that tackled double consciousness among African-Americans. The two major characters of each story underwent different dilemmas. Dee was fortunate to have a family who accepts and recognize her being. Has the freedom to express her cultural background. Her desires and intents are eminently respectful of her heritage. She changed her name to more African sounded name to have a single consciousness of identity that she indeed is an African American. Through the collection of objects that will remind her of her cultural heritage and family traditions only shows that she was determined to strengthen her bridge to her ancestry and cultural background. Thus giving an impression that she was slowly loosing her sense of ancestral consciousness that is why she was struggling to support it with symbolic family and cultural artifacts. While Dee of Everyday use has already established her real identity as an African woman attempting to showcase her heritage by displaying important family artifacts that will symbolize race and ancestry, Robert on the other hand was struggling to be recognize as what he really is. He aims for equality and fairness by taking the matter in his own will.

His being an African-American was being suppressed by his own father who fails to recognize him as his son. He wanted to have the privilege and opportunity to have a better life as the whites. African-American should not be treated as inferior. Unlike Dee who is educated and was given a chance to have a better life in the superior world of the white, is being able to show her heritage with pride. Robert is prohibited to work in the world where white dominates. His own American father wants him to plow the land and nurture the fields rather than go out there be part of the American culture..

While Dee struggles to detach herself from being Americanized by focusing on retaining her cultural heritage amidst her new environment different from her mother’s and sister’s, she wanted to give emphasis on her African heritage. Robert is just merely aiming to be recognized as what he really is and what he can do despite being different from the whites. His African-American heritage seemed to give him the difficulty to choose which ethnicity he should identify with. As much as he wanted to be treated like a white he wanted to act and be treated simply as a full a blooded American. 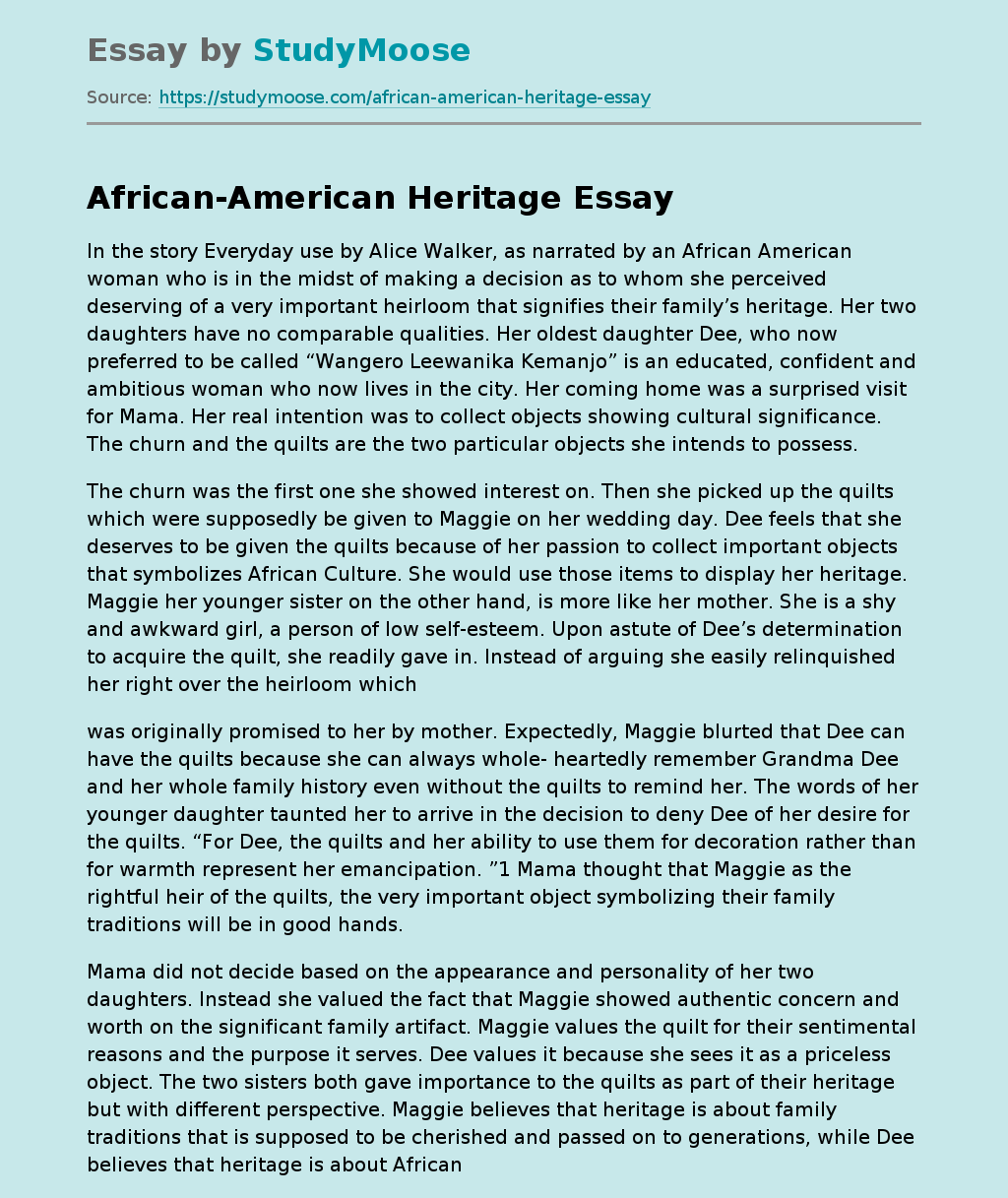