The final film by Marlon Riggs, Black is…Black Ain’t, is concerned with the state of the African American community. This film essentially asks the question, what does it mean to be black? The director and producer, Marlon Riggs, guides viewers along an “an up-front examination of racism, sexism, and homophobia within the black community itself. Bringing together personal stories, interviews, music, history, and performance, Black Is… Black Ain’t asks African Americans: What is black, black enough, or too black? ”1 Unfortunately, the AIDS-stricken director died before the film was completed.

Don't use plagiarized sources. Get your custom essay on
“ African American Community in Black Is Black Ain’t ”
Get custom paper
NEW! smart matching with writer

This film operates as a kind of last will and testament for Marlon Riggs. “He bequeaths the idea that rigid notions of what is or is not black behavior, of who is or isn’t black, need to be abandoned for the sake of strengthening the sense of community within the race. ”2 The beginning of Black Is… Black Ain’t explores the meanings associated with word black. I was very surprised to discover how most black people didn’t prefer being called or labeled black.

At this time, a code of silence existed amongst black people. Living in a society that might lynch a person for being black, it makes sense that celebrating your blackness was forbidden. This eventually leads to the emasculation and castration of the black male. Pre civil rights, most black males were viewed as laughing, singing, entertainers and servants.

Post civil rights, out of centuries of emasculation, the black man needs to reclaim his power. Black people now embraced the word black as an act of self-empowerment. The black man now became patriarch. “Black Is… Black Ain’t forcefully confronts the identification of blackness with a hyper-masculinity born of the ’60s Black Power movement. ”3 Unfortunately, this self-empowerment has the capacity to imprison as well as liberate.

The film reminds us that “slavery and its aftermath involved the emasculation-physical as well as psychological – of black men, the drive for black power was usually taken to mean a call for black male power, despite the needs of (and often with the complicity of) black women. That continues to result in the devaluing of black female contributions to the liberation struggle and in the subordination of black women in general. ”4 The result of emasculation became hyper masculinity. This phenomenon confined the meaning of what it meant to be black even further. For example, to be black is not to be homosexual. This is due to the notion of homosexuality as the ultimate weakness.

Hence there is often prejudice of homosexuals in the black community. The homophobic initiative from the black Catholic Church doesn’t make the situation any better. Hence, Marlon Riggs ties in his own story as a gay black man with AIDS. It really assists the film in showing the restrictions that exist in black unity. So what is the black identity? Are you black enough? Do you talk black? Are you a hyper masculine heterosexual male with kinky hair and a criminal record? I can see how it must be difficult to maintain a sense of communal self.

Angela Davis one of the speakers in the film, provides this answer: “You take some color, a dash or a big dollop, it don’t matter, and you blend it with an assortment of physical features that reflect every face you might possibly encounter on this great earth, mix that up with a culture that just loves to improvise, signify, reclaim, renew, and read – and you’ve got, the recipe, for black folk. “ 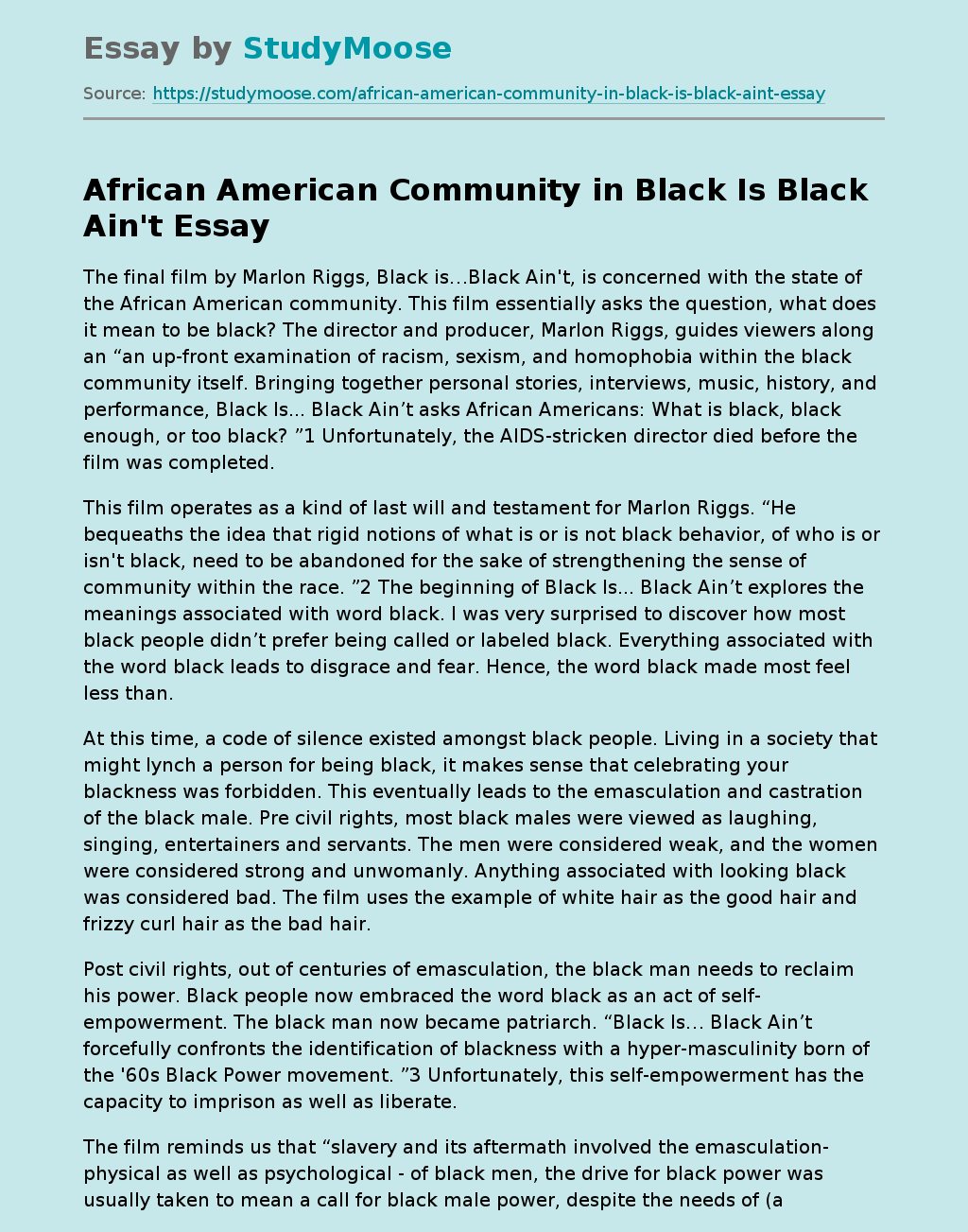