Racial discrimination has long been an issue especially in the United States which is considered as a melting pot of different people from different ethnic and cultural backgrounds. Black people have experienced extreme even radical form of discrimination for centuries, but now, the black people found an ally in the affirmative action policy. This policy, after some time of implementation sparked debate since some people, even the blacks themselves, say that giving racial preferences is never a good thing. The policy has affected admission aspects in schools and employment in jobs.

Don't use plagiarized sources. Get your custom essay on
“ Affirmative Action is Reverse Discrimination ”
Get custom paper
NEW! smart matching with writer

Two job applicants, a white male and a black male, even with the same qualifications, the black male will likely get the job because of racial preference provided by affirmative action. Black people are being given a definite advantage and white people would find this an unfair treatment. The same goes for school admission policies where minorities are being given a higher preference over white people in order to maintain a diverse student body.

Thesis Affirmative action laws were made to eliminate or reduce discriminatory acts but there are numerous claims that these laws have reversed the tide.

Affirmative actions laws may no longer be considered fair in this current setting since it only results in reverse discrimination and it is no longer an effective means of providing opportunities for minority groups. This reverse discrimination is constituted by racial preferences for blacks. This racial preference clouds the judgment of many educational institutions and employers since racial background is being analyzed instead of just the plain qualifications which some white people might find inappropriate.

Voters in California, Washington and Michigan have already submitted amendments to their state constitutions that would prohibit the use of affirmative action in the public setting (Prince & Ryan, 2007). According to actor and columnist Joseph Phillips, affirmative action is not an issue of nondiscrimination, it is now about racial preferences. He emphasized on the point that racial preferences is not an effective way of fighting racism, instead, it brings about negative stereotypes especially in the educational sector wherein it pertains to a person’s intellectual capacity and academic capabilities (Prince & Ryan, 2007).

In a Supreme Court ruling in 2003 which involves the University of Michigan which makes use of racial preferences in its admission policies, the court highlighted the goal of having a diverse student body which is brought about by affirmative action but critics say that this decision by the court would only spark more law suits and that the critics of affirmative action would continue to put pressure on the Department of Education to discontinue the use of the policy (Marklein, 2003).

Evidences have been presented regarding the effects of affirmative action; however, these evidences always seem imperfect and ambiguous. A review of the policy during the Clinton administration indicated that active federal enforcement of the policy in the 1970s resulted in government contractors moderately increasing the hiring of minority workers. Studies have indicated that there is only a meager increase in the employment of black males. Employment share of black males in contractor firms in 1974 was 5. 8 percent and this figure only increased to 6. 7 percent in 1980.

On the other hand, the increase in non-contractor firms was from 5. 3 percent to 5. 9 percent. Also, a substantial number of black government employees got their jobs or promotion to managerial rank because of affirmative action even if qualifications are questionable (Galston). In the education sector, it was only during the height of the affirmative action policy that the enrollment of black people was on a steady rise. From only 4. 9 percent in 1955, black enrollment went up to 7. 8 percent in 1970. The figure further increased to 9. 1 percent in 1980 and 11. 3 percent in 1990.

On the other hand, according to a report from the Census Bureau, Hispanics holding bachelor’s degrees or other advanced degrees went up to 9 percent in 1994 from only 5 percent in 1970 while the rate for blacks is 12. 9 percent from 4. 5 percent (Galston). Another issue that rises with affirmative action is that minority groups may gain an image of inferiority since the whites may think that a black student was able to enter the university or a black person is able to get a job only because of affirmative action even if the black person has all the necessary qualifications (Hoffman).

Overall, the past 30 years has been fruitful for the black people as they generally lived better lives with better education and income all because of racial preferences. This has resulted into what Seymour Martin Lipset classifies as a “growing differentiation” within the community of black people from the growing black middle class to the ghetto poor. The affirmative action program would work better if it would remove barriers for those who have the credentials to succeed instead of giving them a definite advantage in admissions. Anti-Thesis

The country is trying to make up for its sins and wants to correct it but black people will lose more than what they will gain from the policy (Steele). Some also argue that it is difficult to remove stereotyping and discrimination without the policy and that it is needed to maintain diversity. Another argument states that affirmative action should continue because racism still exists in this society. The argument that affirmative action is needed for the white people to compensate for the discrimination against blacks is shrouded in hatred and appears as a form of retaliation against the white people.

According to Linda Chavez, founder and president of the Center for Equal Opportunity, the Michigan University case speaks of admission and scholarship programs for minority groups which make use of substantially different standards and must include the racial background. People against the policy said that they will take their case to the ballots but the court has already made it clear that it is the university’s prerogative to include race in the admission policy to ensure the diversity of the student body (Marklein, 2003).

The 2003 Supreme Court ruling allowed admission officials to consider race in the selection process. Colleges and universities have no obligation to use racial preferences but they may adopt such policies to meet a satisfactory level of student diversity. Arthur Coleman, a former official under the Department of Education said that adopting diversity is a choice and is not mandated by any law or policy. According to a survey by Public Agenda, 79 percent of Americans agreed that it is important for schools to have a diverse student body while only 54 percent approved of affirmative action programs.

In a separate poll conducted by Gallup before the court handed out its ruling, only 49 percent said that they are in favor of affirmative action while 43 percent said that they are not in favor (Marklein, 2003). Synthesis Affirmative action was made to eliminate discrimination but discrimination would not likely be eliminated if the method used to eliminate it is discriminating in itself since it results in a reverse discrimination. Instead of blacks being discriminated, the white people are now the ones being discriminated because of racial preferences given to black people in school admission policies and employment opportunities.

Affirmative action will not eliminate racial discrimination but it rather contributes to it. The policy may have its benefits every now and then, but generally, it is no longer applicable in the current setting as more and more white people are feeling the negative effects of the policy. It does remove barriers so that people from minorities can compete but it comes with a price. They gain an image of inferiority because people may think that it is only because of affirmative action that they have reached a certain level of success and not because they are really qualified (Hoffman).

The Supreme Court has handed out its decision in the Michigan University case and the decision maintained that the school may use the race as part of the admission policy to maintain the diversity of the student body. Even without affirmative action, colleges can use race as a basis of application to meet a desired rate of student diversity since having a diverse student body promotes a better learning environment (Marklein, 2003). Ultimately, data indicates that affirmative action is no longer effective which means that it is time to adopt an alternative policy (Galston).

A better way of embracing diversity would be to encourage minorities from a young age to work for their goals and get a good education. Assisting people from poor socio-economic backgrounds to gain resources and motivation should also be done so that they will also be competent when it comes to school admission and job-seeking. This is a lot better than giving them preferential treatment because they would not be treated as inferiors (Hoffman). Conclusion

To conclude, affirmative action may have been an effective way of reducing racial discrimination against minorities, but now, it is no longer applicable to be used in the current setting since it results in reverse discrimination. The white people are now put in a seat that was once held by other minorities. Affirmative action might trigger hate targeted towards the blacks and other minorities because of the reverse discrimination. The policy which gives racial preferences also connects inferiority with minority groups. 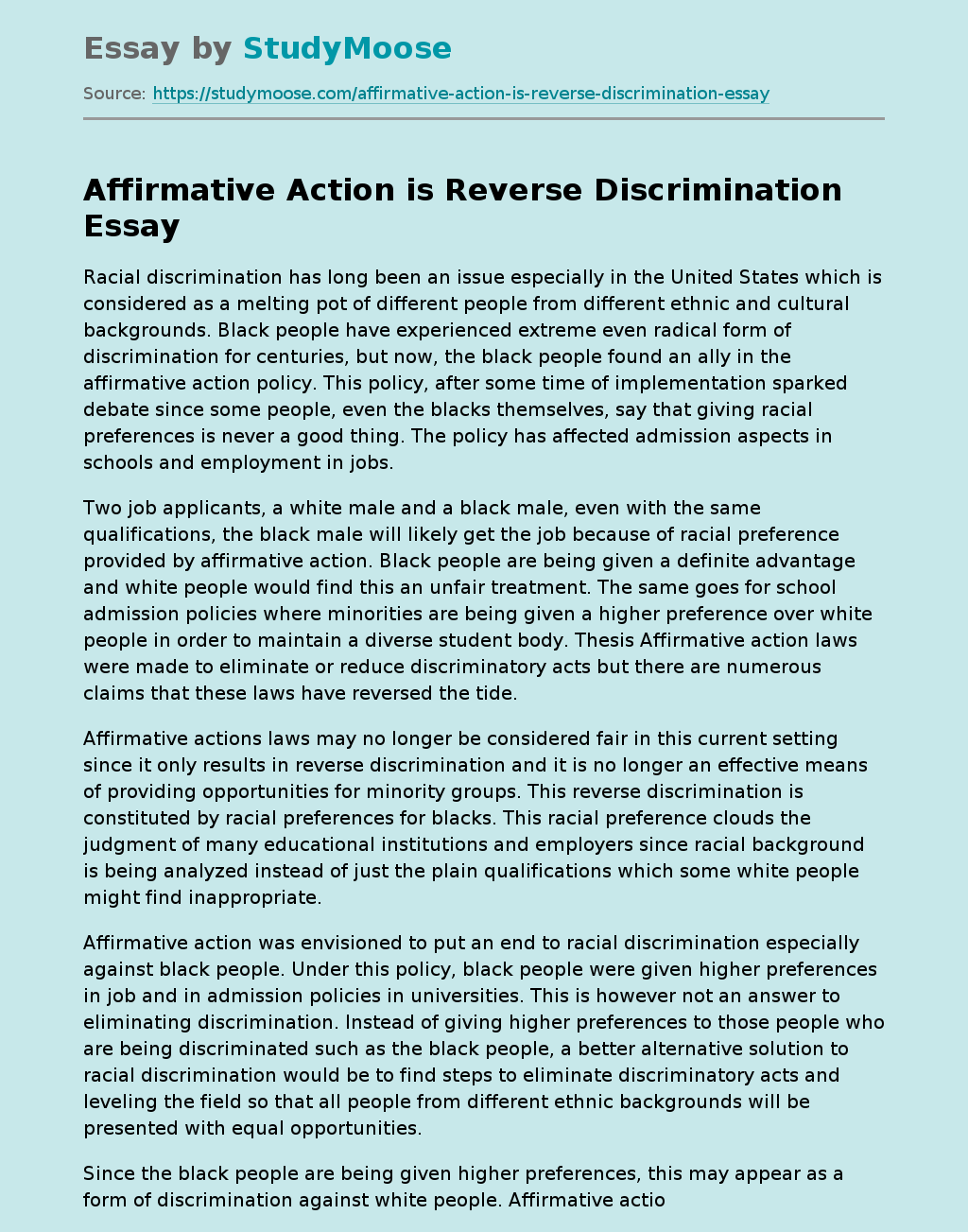