The readings “Foul Shots” by Rogelio Gomez and “Civilize them with a Stick” by Mary Crow Dog reflects on the discrimination and prejudice experienced in places of education. In “Foul Shouts,” Gomez examines the shame and anger he felt as a teenager faced with obstacles of race and social class while Mary, a Sioux woman writes on the debasement and racism in a satire on color prejudice she suffered as a young student at a boarding school. They both write from past experiences in some measure of cynicism and open mockery they were subject to in school.

Don’t waste time
Get a verified writer to help you with Affirmative Action in Foul Shots by Rogelio Gomez
Hire verified writer
$35.80 for a 2-page paper

There is a general mood of hatred and indignation. Often, a single check mark in a box labeled African American, Hispanic, American Indian, or one of several other underrepresented minorities listed in the ethnicity section of college eligibility and rights can mean the difference between acceptance and rejection. Although diversity is an important part of a liberal education, it is by no means its only goal.

The dogma has logical consequences that are profoundly important. If blacks, for example, are equal to whites in every way, what accounts for their poverty, criminality, and dissipation? Since any theory of racial differences has been outlawed, the only possible explanation for black humiliation is racism.

And since minorities are markedly poor, crime-prone, and dissipated like Mary suffers in “Civilize them with a stick”. All public discourse on race today is locked into this rigid logic. Though the failure of minority students does not depend on white wickedness, Gomez in “A foul shot” is stoned with disillusion of being labeled as a “learning disability” because he fails to pass first grade.

This type of disparage threatens to veer off into the forbidden territory of racial differences. A similar incident is noticed in Mary’s piece ” Civilize them with a stick” where she is singled out as a bad example for unchastity in class. Thus, even if today’s whites can find in their hearts no desire to oppress minorities, yesterday’s whites must have oppressed them. Some whites do not consciously oppress blacks. They oppress them unconsciously. The dogma of racial equality leaves no room for an explanation of minority failure that is not, in some fashion, an indictment.

The logical consequences of these discrimination and feelings of inferiority are clear in both readings. Since we are required to believe that the only explanation Mary’s failure is racism, every time a minority is poor, commits a crime, goes on welfare, or takes drugs, the priests and sisters stands accused of yet another act of racism. All failure or misbehavior by the white students, stand as proof that the society is riddled with hatred and bigotry. For precisely so long as non-American Indians or non- pure Indians fail to succeed in life at exactly the same level as the minority students, the Indians will be, by definition, thwarting and oppressing them. This obligatory pattern of thinking leads to strange conclusions. First of all, the racism in Mary’s school is a sin that is committed almost exclusively by Holy people. Thus, whether or not an act is called racism depends on the race of the racist.

There is another curious asymmetry about American racism. When non-whites advance their own racial purposes, no one ever accuses them of “hating” another group. They can agitate openly for racial preferences that come only at the expense of non-whites. The coach in “Foul Shots” tries to wipe out separation due to feelings of minority by asking both teams to hang out in pairs after the games. Should they actually go so far as to say that they prefer the company of their own kind that they wish to be left alone to enjoy the fruits of their heritage? Here, then is the final, baffling inconsistency about American race relations. All non-whites are allowed to prefer the company of their own kind, separating themselves from others who differ to think of themselves as groups with interests distinct from those of the whole, and to work openly for group advantage.

This kind of hatred is not peculiar to the colleges alone. Many teenagers who are either in the hate groups or have a lack of faith in equality are made this way through their high schools. Many high schools are either all black or all white and influence the way that teens think. The all black schools even resemble the schools of old. They have minimal funding and substandard equipment. They are always in the worst neighborhoods and are filled with drugs and violence. In all white high schools, on the other hand, students are not accustomed to being around blacks. This might be one of the reasons that blacks and whites do not mix well in colleges.

At the same time, whites must also champion the racial interests of non-whites. They must sacrifice their own future on the altar of “diversity” and cooperate in their own dispossession. Perhaps if everyone would have a positive outlook on this problem in the future, there will be an end to all of the segregation in this nation’s schools and everywhere else that this pestilence exists. They only wish Mary asks in the “Civilize them with a stick,” is to be left alone to participate in the unfolding of her racial and cultural destinies. 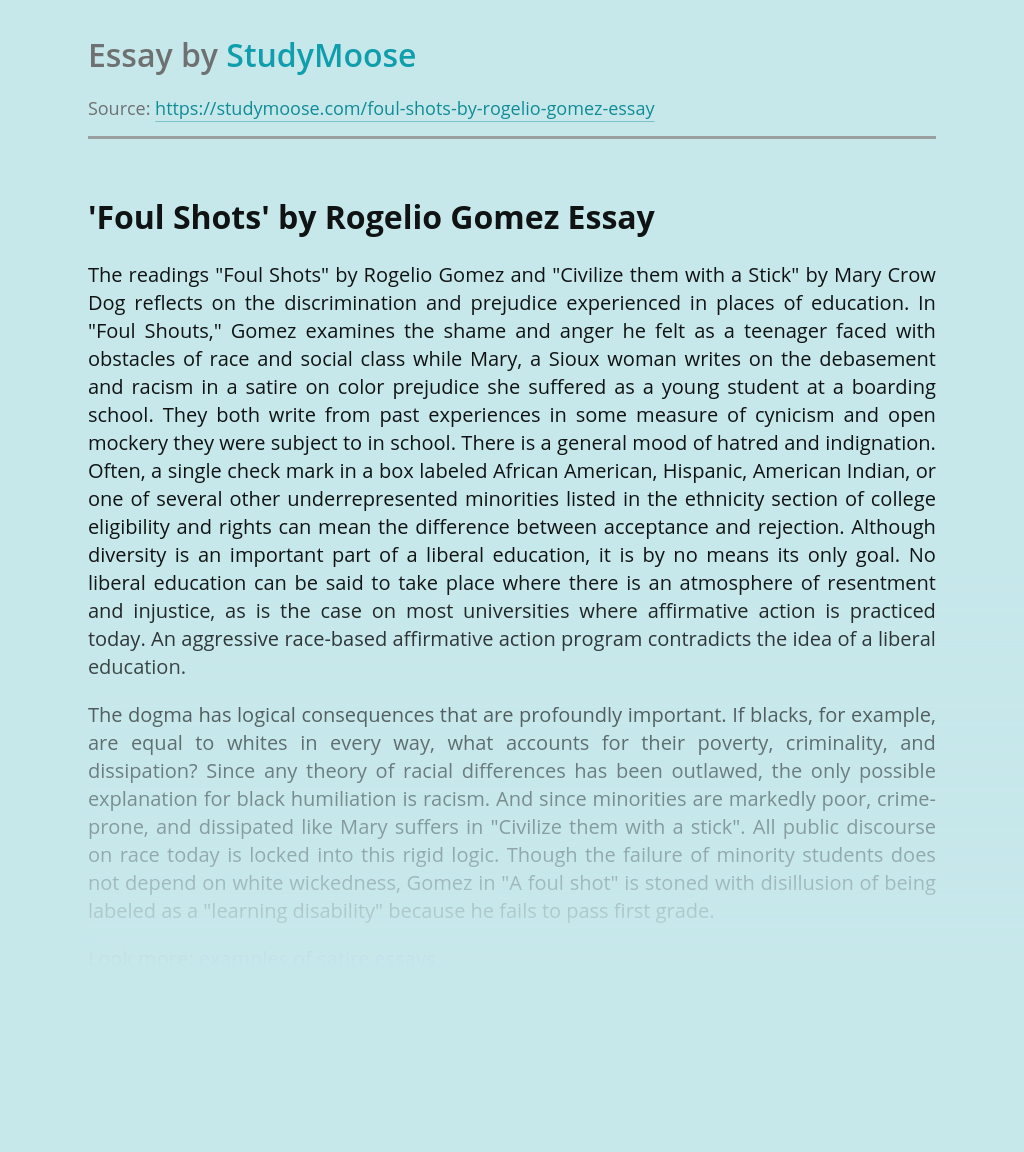 Don’t waste time
Get a verified writer to help you with Affirmative Action in Foul Shots by Rogelio Gomez
Hire verified writer
$35.80 for a 2-page paper
Stay Safe, Stay Original