Mr. Mark Twain was an American author and humorist born in 1835. His birth name was Samuel Langhorn Clemens. He was responsible for such literary masterpieces as The Adventures of Tom Sawyer, and The Adventures of Huckleberry Fin, which became known as the Great American Novel. He was admired by many of the great novelists of the era, including William Faulkner, Earnest Hemingway, and Norman Mailer. Before his death in 1910, he had penned over thirty books. He then had two more books publish after his death.

Don't use plagiarized sources. Get your custom essay on
“ Advice to Youth by Writer Mark Twain ”
Get custom paper
NEW! smart matching with writer

In 1907, he received and honorary doctorate from Oxford University. He is known as one of the greatest American writers of all time.

Mark Twain’s Advice to Youth is an interestingly contradictory speech with a comedic approach aimed toward the teenage audience. His intent is not to undermine the common family values, but to provide an honest real-life approach to those values so as to be better understood by the less developed teen mind. In this paper I will be discussing the main points of Mr.

Mr. Twain seems to understand this and therefore, rather than condemn teens for this, he encourages them to carve their own path while still giving their parents a sense of complete control. As a teen, I recall my parents always “harping” on me about who my friends were, speak eloquently, and sit up straight. Had I read Mr. Twain’s speech back then, perhaps I wouldn’t have been in as much trouble with my parents so frequently.

Next, he discusses the subject of respect. In this, Mr. Twain’s intention is not to mock the value of respecting others, but rather to remind that sometimes revenge is necessary. He uses the example of if someone has wronged you simply watch your chance and hit him with a brick(Twain,1882) as a means to relate to the teenage common practice of engaging in altercations to solve their disputes. I recall myself as a teen resorting to violence to rectify majority of my petty conflicts. Mr. Twain does, however, remind his audience that if indeed the retaliation was ill thought out and undeserving, to  take responsibility for ones actions and apologize. Mr. Twain then goes on to discuss the importance of getting plenty of rest. He suggests “Getting up with the lark”(Twain,1882) as the best possible method. His meaning behind his rhetoric with regards to this matter is to ensure your reputation remains a pleasant one by allowing others to believe you are an early riser, whilst still getting the required sleep to be at your best in your endeavors. I as a child as well as a young adult often had a very hard time getting to sleep at a decent hour or waking in time to complete most of my required tasks for the day. This advice would have come well in handy.

Perhaps his best advice to his audience is to refrain from the recreational use of firearms. He points out that although the weapon may be perceived to be unloaded, there is always a chance that is not the case. He goes on to describe an incident of child antics that, although it did not, might have resulted in a tragic death. I can relate completely with this advice, as I myself have lost many loved ones to gun violence, both accidental and malicious. He then goes on to make light of the situation by making the comment, “A youth who can’t hit a cathedral at thirty yards with a Gatling gun in three quarters of an hour, can take up an old empty musket and bag his grandmother every time, at a hundred.(Twain,1882) He also makes what some readers today may consider a crude and distasteful anecdote concerning the outcome of Waterloo if the opposing army had been composed of the defending army’s female descendants. According to Mr. Twain, The very thought of it makes one shudder. (Twain, 1882) I personally find this statement humorous. It makes a point while also keeping the mood light and happy in nature. In short, Mr. Mark Twain’s speech “Advice to Youth” is a comedy filled view on moral values for the teenage mind. I feel this speech should be a requirement in all academic institutions. Perhaps the youth of tomorrow will take his words to heart and make this world a better place for the future. 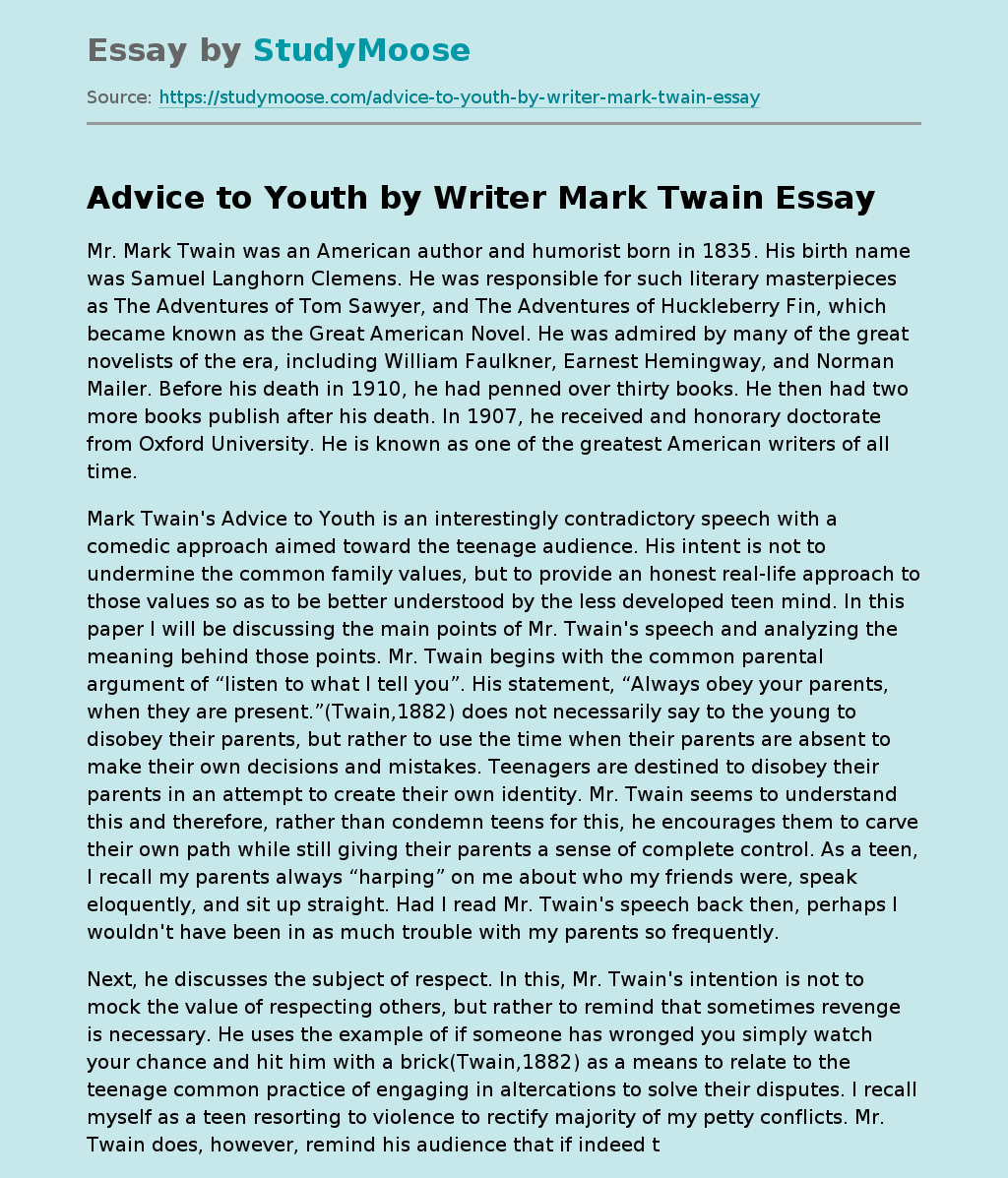