Advertising on American youth has changed somewhat in the last ten years. Today’s youth, mostly between the ages of 15-18, see an advertisement on television, or the internet and they want to try it , have it, or even steal for it because they desire it. Take alcohol advertisements for instance. Alcohol advertisements are more complex and appealing to today’s youth than they were ten years ago. The effect of these alcohol related advertisements, cause our youth to try just a little sip or worse drink to many.

Turn in your highest-quality paper
Get a qualified writer to help you with
“ Advertising Effects On Young People ”
Get high-quality paper
NEW! AI matching with writer

Because our youth today don’t understand the effect of alcohol on them, they get behind the wheel of a vehicle and either cause an accident where they hurt or kill themselves or they hurt or kill someone else.

Alcohol advertisements were not as appealing ten years ago as they are today. Really all you would see were a few beer advertisements and the “Drink Responsibly” at the end of it. Honestly, who really drinks responsibly these days? I don’t believe that our American youth does or there would not be that many drunk driving accidents involving our youth.

Television is the dominant way to advertise to American youth because that is what our youth spends most of their time doing. By searching online for evidence that could support this, I found these statistics from thinkbox.tv:

These statistics can somewhat show that the youth today spends more time watching television and playing on their computers than they do outside. Furthermore, television has become a powerful piece of technology for today’s youth. For example, the variety of channels that is now available for our youth. For that reason, television is the main source of advertising to our youth today.

In a similar fashion, Violence has taken over our youth today. The video games that most young people play portray violence in a very bad way. Some gangs or “clicks” use this type of violence as an initiation for young people to join. I have seen more teen tragedies in today’s news due to this type of violence than the last ten years. There is teen kidnappings, violent injuries and even murders. Most of the time, it is teen on teen violence because they think its ok because they see it on television or even the internet. It is ridiculous on how much violence has happen with today’s youth. I believe it is because of all the advertisements that portray violence has an ok thing. For example, video games are the main source of violence in today’s youth. My opinion on this type of advertising is one of the causes of most of our youth’s accidents, tragedies, and even deaths. Today’s advertising has more effect on our youth than it did ten years ago.

In conclusion, advertising on American youth has caused tragedies and even death. Young people today really don’t have enough common sense to know that if it looks, taste, or smells bad, that it probably is and that they should not partake in it. Our young people today seem to think that if they partake in things that could hurt them then it makes them fit in more with their peers. To clarify, “If you can drink this or smoke this or even try this, then you can be part of this “click”. It sickens me to know that even our youth today has effects on other young people. Parents should monitor more of what their child is doing, what they are watching and what kind of people their child is friends with.

In another sense, parents could prevent tragedies or even death from occurring. Yes, advertising in some way has increased the potential for success in American youth; however it still has potentially negative perspectives on American youth today. By parents monitoring what their child is watching, what their child is doing, and what kind of people their child is friends with can potentially decrease the amount of smoking, drinking, and violence that our young people partake in today. There is always positive potential for our American youth. We just have to monitor more of what they watch and make sure that they know right from wrong.

The effects of advertising on today’s young population has increased the potential for success, however there is still non-targeted advertisements that reaches out to today’s American youth in a potentially negative perspective.

A. The relation between advertising today verses ten years ago.

B. The effects on American youth today verses ten years ago.

A. Topic Sentence on the focus of the paragraph

B. Specific examples of the effects of advertising on today’s youth.

C. My explanation and analysis of my examples.

B. My explanation on why I disagree

C. Examples of why I disagree

A. Summary of my body paragraphs

C. My final thoughts or call for action 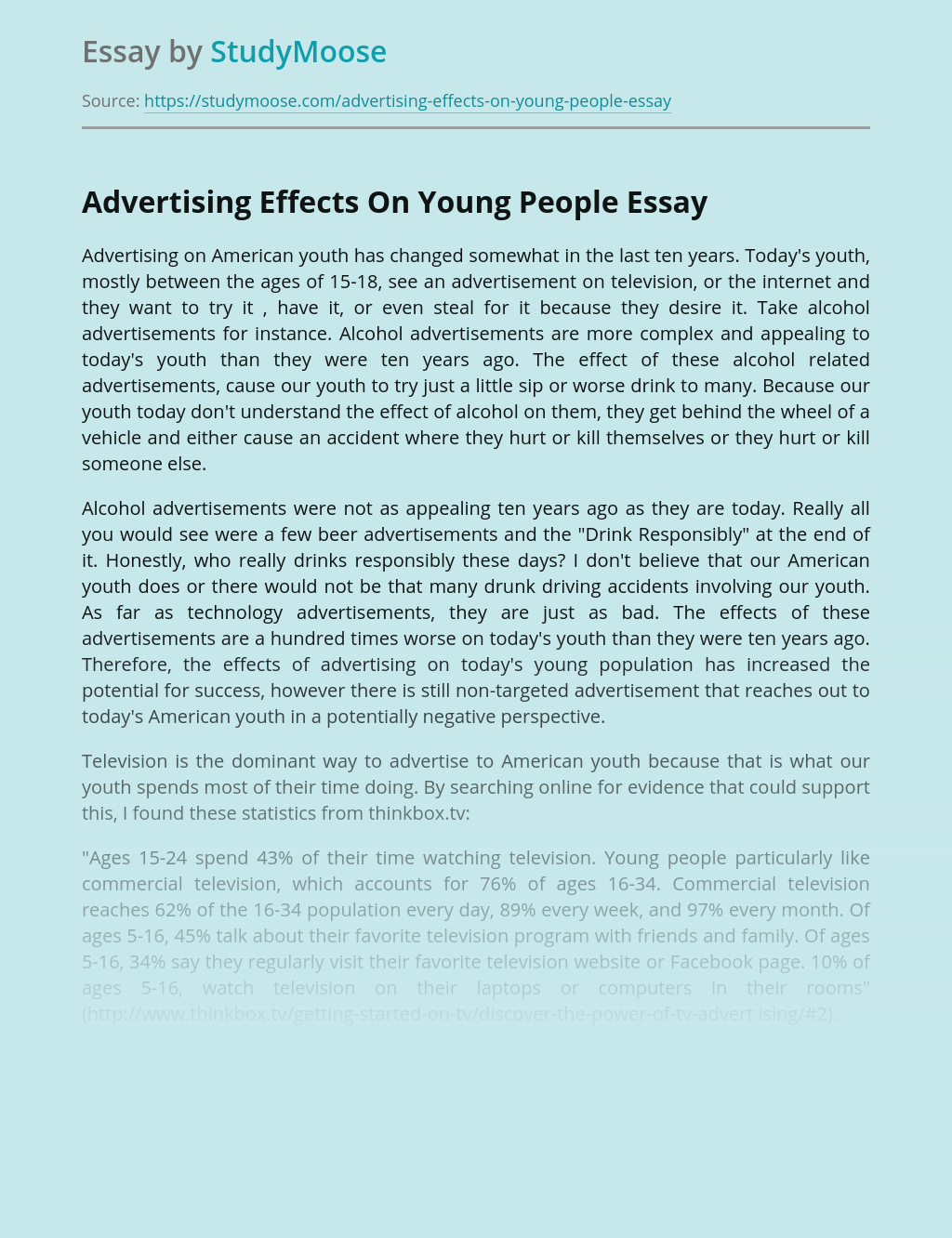 Turn in your highest-quality paper
Get a qualified writer to help you with
“ Advertising Effects On Young People ”
Get high-quality paper
Helping students since 2015
Stay Safe, Stay Original