A story of mine come immediately to my mind. once I wanted a pair of slipper, but after entering the supermarket, I was shocked for there were thousands of brands of slippers. eventually, I chose LULU which was the only brand I’d ever seen on the television. according to a well known sociologist, and I paraphrase, without advertisement, consumers and merchants both lose something, which is to say that consumers lose the opportunity to obtain the one suit them most and merchants may lose their potential customers.

Don't use plagiarized sources. Get your custom essay on
“ Advertising and Advertisement Contributes ”
Get custom paper
NEW! smart matching with writer

aturally, it is significant to advertise for the firms. meanwhile a recent survey conducted by sina. com will make this point valid and convincible. the sales volume of a certain product doubles since its manufacturer advertise on a TV program. for most of time consumers don’t know their real requirement at all, so their needs to a certain kind of product is influenced greatly by the advertisements. for instance, my mother went shopping one day in order to buy some milk and vegetables, nevertheless she came back home with a pair of trousers… n her words, just because she ever saw it on a magazine.

in addition, one of my classmates used to buy whatever he is interested in on.

EBAY. com for about 2 times a week. considering the enormous advantages for manufacturers, advertisement has the necessity to remain. each coin, however, has its two sides. rare as the drawbacks of advertisement are, they do exist. some small companies completely rely on the boasting advertisement to attract consumers.

in order to make the advertisement to be credible, they invite he celebrities, make special good effect, and even film to publicize their production. unfortunately, consumers are always wise enough to distinguish a fair publicity from one with exaggeration. Hence, those companies are bound to suffer the tremendous cost of advertising without benefiting from it. to sum up, the merits of advertisement for corporations far outweigh its defects. thus, i strongly advocate that advertisement contributes to the amplification of the profit of enterprises and should be retained. 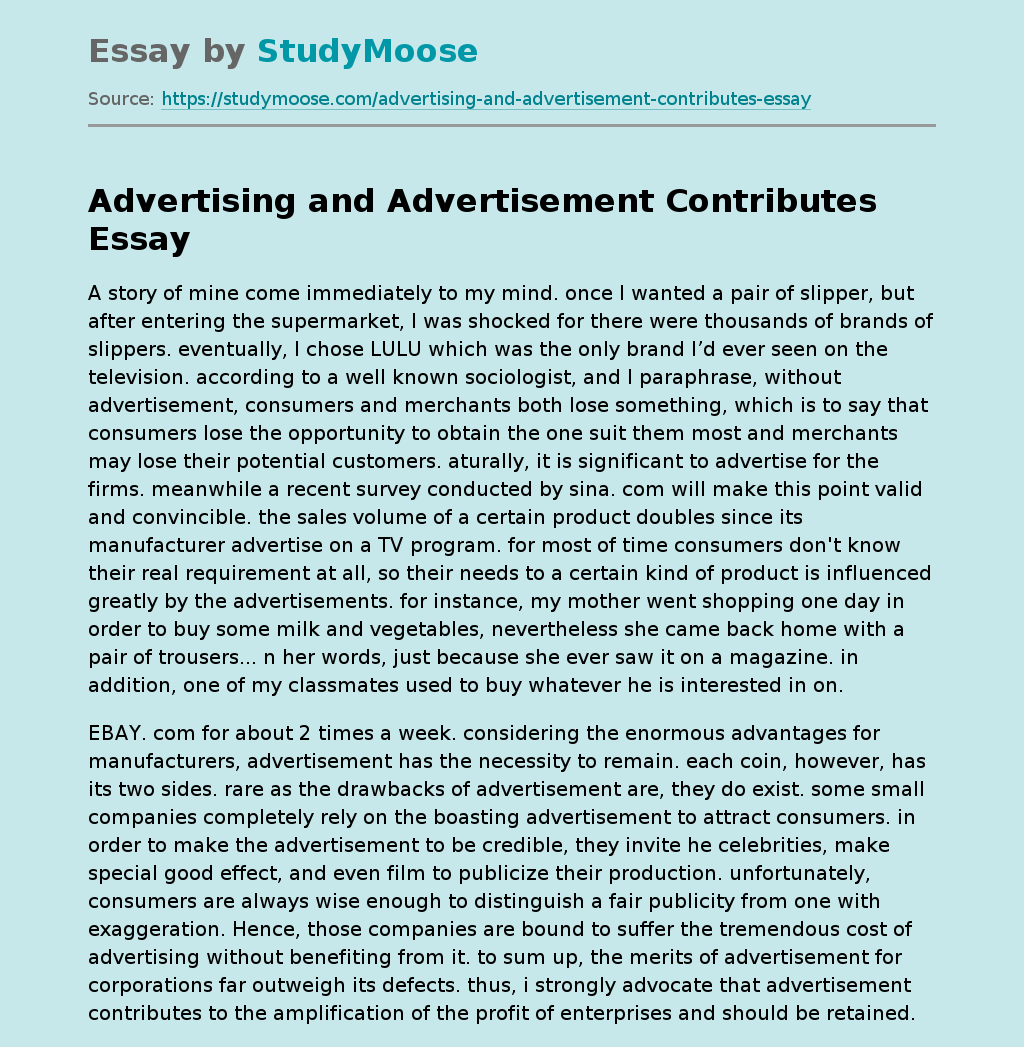