The Adventures of Huckleberry Finn: His Moral Character

Despite the moral dilemmas that Huckleberry Finn faces, he is able to unfold his moral character through out the book. Consciously he feels that what he is doing is wrong, but still does it, which turns out to be the right thing to do. He not only lies and steals for his own survival, inquiry and benefit but for the benefit of others. Huck is a very caring person and through out his journey he had the need to help those around him.

Don't use plagiarized sources. Get your custom essay on
“ The Adventures of Huckleberry Finn: His Moral Character ”
Get custom paper
NEW! smart matching with writer

For instance, he starts writing Miss Watson a letter, telling her where her slave, Jim, is. At first he feels refreshed and content with himself after he writes it, but later he tears the letter up. I felt good and all washed clean of sin for the first time I had ever felt so in my life, and I knowed I could pray, now.

But I didn’t do it straight off but laid the paper down and set there thinking; thinking how good it was all this happened so, and how near I come to being lost and going to hell.

And went on thinking. And got to thinking… ‘All right, then, I’ll go to hell-‘ and tore it up. ” By doing this, he is violating the code of ethics, such as social behavior, that he has been taught by society. Why is this? This is because Huck sees Jim as his friend and not just as a slave.

He does not want to betray the only person that needs him and has been there for him.

Jim is also a father figure to Huck, by constantly worrying about him and making sure that he is safe. There are many occasions where Huck had to choose from whether or not he should do the right thing in his eyes, or the right thing in the eyes of others. He deeply cares for those around him and tries to help them at all costs. By this time of the story, Huck has gone through a personal growth. Earlier in the chapters, he would never have thought of making such a sacrifice.

There were many times that Huck had a chance to turn Jim in, but didn’t. This just reiterates how his relationship with Jim has changed since the beginning of their journey down the river, from a companion to respected friend to being the only family that Huck acknowledges. He made this decision to rip up the letter and not turn Jim in, in order to protect him and care for him, just like all those times that Jim did for him. This however, was not the only time that he saved Jim. Many times before the letter, as Huck’s feelings for Jim grew stronger, he helped Jim multiple times.

While they were sailing down the river, Huck went ahead in the canoe and met up with two men in another canoe with guns. They asked him if the raft up yonder was his, and Huck answered yes. They wanted to check it out and since Huck knew that Jim’s life was in danger, lied to the men, telling them that the man on the raft was his father with a bad case of the small-pox which led the men right away on another path to avoid the raft at all costs. Huck speculated that you could spot a black from far away, so he had Jim hide in the canoe with a quilt over his body.

This signifies how Huck still holds the belief that whites and blacks are very different. Yet in his willingness to aid Jim, he is showing that despite these differences between people, he understands that everyone is human and deserves to be treated equally, even the King and Duke, to a certain extent, The King and the Duke come running out of the woods trying to escape the townspeople from getting feathered and tarred, these two men are con artists. These two men are not actually a king and a duke, however they assume these roles in order to pretend that they are royalties.

The only reason that Huck deals with these two men are because he doesn’t want to deal with the consequences of crossing their path, so Huck and Jim play along with them, treating them as royalty. He also wants to help them for a certain extent of time and they are also entertainment for them on their journey. “If I never learnt nothing else out of pap, I learnt that the best way to get along with his kind of people is to let them have their own way. ” He helps these two men by letting them use the raft to get away from the townspeople and to have a place to rest.

They take over Huck’s bed and use him for multiple purposes, such as having him pretend to be Adolphus the servant, while they pretended to be the brother of Mr. Peter Wilkes to con money from the family. Even when Huck is helping the King and Duke in their scam to steal the money from Peter Wilkes’ family, he feels horrible at what he is doing. So after the King and Duke hide the money, Huck takes it and hides it from them. Then he warns Miss Mary James, telling her what they were up to in order to return the money to the rightful owners. Huck’s morals change from the beginning of his journey to the end.

He is less able to tell a lie that is believable and when he knows that the King and Duke are stealing money from the Wilke’s family, he feels bad. His means for survival started out as his lying. In chapter 11, Huck lies to Mrs. Judith Loftus in order to find out more about what the townspeople thought about what happened to him and Jim. He is invited into her home, dressed up as a little girl. At first he says that his name is Sarah Williams, then Mary Williams, and finally he takes off the wig and says that his name is Sarah Mary Williams George Elexander Peters.

She figures out that he is not a girl but is still not able to figure out that Huck is telling a lie by telling her that he is George Elexander Peters. He goes to this lady for inquiry. He wants to know how the people responded to “his death” and the escape of Jim the slave. This is all for him and Jim’s survival considering that Huck faked his own death and Jim is wanted. But by chapter 29, when he is trying to tell a lie, he is not able to. He has grown a conscious where when he knows that something is wrong, he is not able to lie as well as usual, while as when he sees nothing wrong with the situation, he is a much better liar. ‘Set down, my boy; I wouldn’t strain myself if I was you. I reckon you ain’t used to lying, it don’t seem to come handy; what you want is practice. You do it pretty awkward. ‘” Huck is still a mischievous kid. Before he leaves on his journey, he is part of Tom Sawyer’s gang of robbers and he plays many tricks on Jim. Jim gets physically hurt when Huck puts a dead rattlesnake next to Jim’s leg while asleep. The snake’s mate came and bit Jim in the heel, leaving a big swollen heel, all thanks to Huck and his practical jokes.

First of all, Huck didn’t want Jim to know that this was Huck’s doing and so verbally he was not able to say sorry. The next trick he played on Jim made him very confused and upset. There was a thick fog one night and Huck had tried to tie the raft to the canoe, but the raft drifted off with Jim on it, while Huck was on the canoe. All through the night, Huck and Jim call each other’s names in hopes of finding each other but is unsuccessful through the night as they were separated by an island. However in the morning Huck manages to find Jim and the raft and tells Jim that it was all a dream.

This confuses Jim and he gets upset at Huck, so Huck apologizes to Jim. This shows how Huck has a heart and feels bad whenever he does something wrong to Jim. However, being a moral character, despite the lying and stealing is not necessarily a good thing at all times. Huck feels bad for the King and the Duke. He feels compassion for them even though they are conning people of their money as they move from city to city. He sees them perform one con-artist show after another, stealing from one person to another and yet he feels compassion for these two men.

While being a moral character, he had to sacrifice his safety many times to achieve this for others, but that was the kind of person that Huck was. Even though Jim does help Huck through the journey, it is more of Huck helping Jim, and Huck helping the King and the Duke. Despite all of the morally unacceptable behavior that Huck had witnessed, he was able to overcome this by staying true to himself. Although this book didn’t do much for the American image, there still remained one boy who’s heart seemed to be in the right place, his name was Huckleberry Finn.

The Adventures of Huckleberry Finn: His Moral Character. (2020, Jun 01). Retrieved from https://studymoose.com/adventures-huckleberry-finn-moral-character-new-essay?post 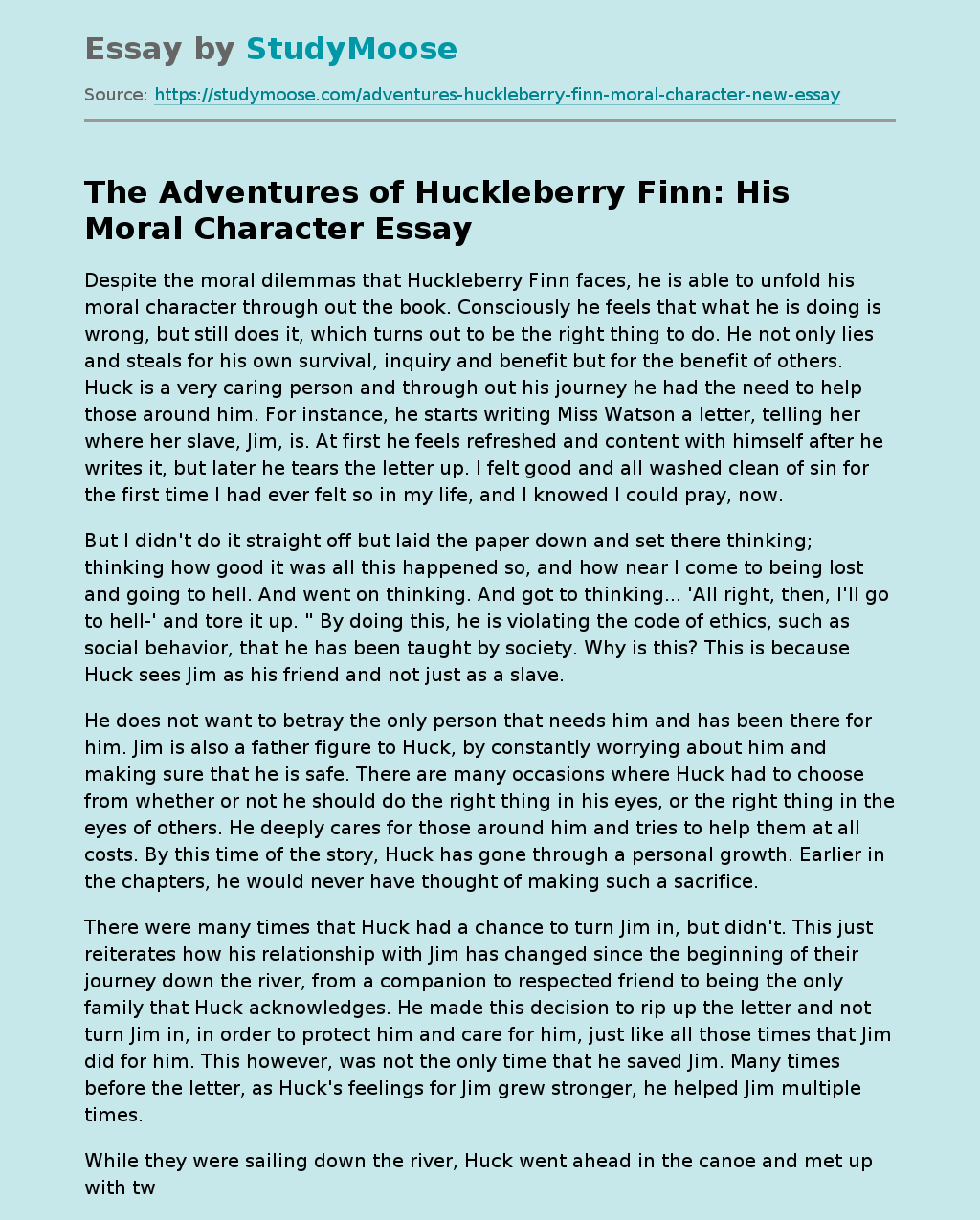